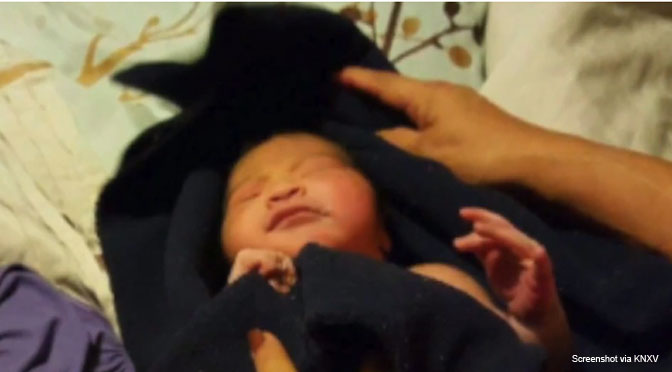 On Tuesday, an abandoned newborn girl was discovered in a Mesa, Arizona front yard. The baby had been left on an irrigation box in a carrier, covered with a metal sign.

Roseanne McCulloh and her son noticed the carrier early Tuesday morning. They were suspicious at first but chose to look inside and were “shocked” to find a baby girl…

Roseanne said she gently removed the wet blankets and cloths wrapped around the tiny girl and found the umbilical cord still attached.

The family called 911 and tended to the newborn before the Mesa Fire Department arrived.

McCulloh believes the unexpected event was supernatural, and she is glad Baby Jane was left at her house, instead of another. Arizona Central reports:

James McCulloh, Roseanne’s husband, said they were relieved to hear the baby was in good hands at the hospital, but that one of the most disturbing things about the incident was that the mother could have safely released the infant at the Fire Department station just a few blocks away from their house on Alma School Road.

Arizona has a Baby Safe Haven law which offers mothers a 72-hour time frame in which they can drop off a newborn at a hospital, fire station, adoption agency and some churches without fear of prosecution.

The baby, who officers are calling “Baby Jane,” made it safely to the hospital, weighing in at 7 pounds, 8 ounces. Mesa police are currently searching for the parents.