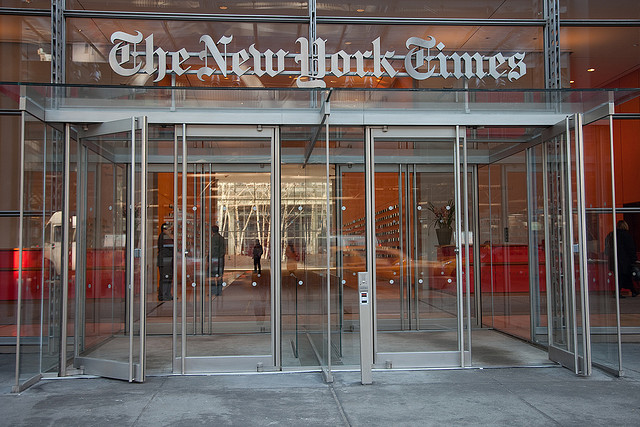 Since when did the editorial board of the top consumer paper in the nation resort to sounding like an angry teenager in a fight? Since now, it seems.

The opening of the editorial says:

A hidden-camera video released last week purported to show that Planned Parenthood illegally sells tissue from aborted fetuses. It shows nothing of the sort. But it is the latest in a series of unrelenting attacks on Planned Parenthood, which offers health care services to millions of people every year. The politicians howling to defund Planned Parenthood care nothing about the truth here, being perfectly willing to undermine women’s reproductive rights any way they can. The New York Times shows its bias and unwillingness to consider that there might be merit to the video. In fact, it’s a bold statement to make after only two videos have been released when the Times knows more are coming. However it’s not surprising that this is a biased, one-sided take. The paper’s editorial page editor, Andrew Rosenthal, has said publicly: “We are strong believers in the right to privacy and the associated right to reproductive choice.”

So much for balance.

But wait, people cry, it’s an editorial. It’s supposed to take a side. Well, sort of. As Rosenthal said in this video where he offers seven tips for writing an effective editorial, editorials must be “based in principle but also based in fact.” Clearly the Times missed the fact part – even though Rosenthal hammers this home in his video, adding:

There’s nothing that’s going to undermine your editorial faster than a fact you got wrong that you did not have to get wrong.

Yet the tone and dogma of the editorial shows there is not the remotest of considerations that Planned Parenthood could do any wrong. Rosenthal is correct that we are not entitled to our own facts, but clearly the board’s love for the abortion giant clouds its ability to look beyond the rhetoric of Planned Parenthood to the facts.

It continues with these statements:

According to a letter sent by Roger Evans, a lawyer for Planned Parenthood, to the House Energy and Commerce Committee, the video is a result of a years long campaign of deception.

The Center for Medical Progress — which managed to get tax-exempt status in 2013 as a biomedicine charity, according to a report by The Huffington Post — appears to have done little beyond producing the undercover video. First, using Evans’ letter as a reliable source is ludicrous. The man is in charge of defending Planned Parenthood. It’s like using the expensive defense attorney of a murderer as a source to offer facts about the murder.

Second, the diction and connotation of this line: “which managed to get tax-exempt status” really says, “somehow pulled the wool over the IRS’s eyes to get a status it didn’t remotely deserve.” Because Clearly the Times has done research into the organization and knows all the ins and outs. Or not.

Finally, what arrogance is displayed in this section to say the Center for Medical Progress “appears to have done little beyond producing the undercover video.” The assumption in making that statement – from an entire editorial board, no less, further shames the profession of journalism.

How could the Times even know what the Center for Medical Progress has actually done? Has it asked?

Researchers use fetal tissue to study and develop treatments for diseases and conditions like H.I.V., hepatitis, congenital heart defects, retinal degeneration and Parkinson’s. Last year, the National Institutes of Health gave $76 million in grants for fetal tissue research. Planned Parenthood is certainly not the only collector of fetal tissue — clinics associated with universities also supply tissue for research.

The Center for Medical Progress video campaign is a dishonest attempt to make legal, voluntary and potentially lifesaving tissue donations appear nefarious and illegal. Lawmakers responding by promoting their own anti-choice agenda are rewarding deception and putting women’s health and their constitutionally protected rights at risk.

Yes, researchers use some fetal tissue for studying diseases. And it’s true the NIH gives large amounts of money to these researchers every year. It’s true the “tissue” comes from more places than Planned Parenthood, though it is the largest abortion provider in the nation. However, these statements ignore a significant point.

There are ethical ways of gaining fetal tissue. Sadly, many women have miscarriages or ectopic pregnancies, which would ethically let fetal tissue be used where the method for obtaining it was not from a choice to kill. This attitude – that since they do research and the government gives people money to do it, it’s all perfectly fine — is backwards. It says the end justifies the means; that even if a child dies – is killed – maybe one day a researcher will save another child. It’s a sick reasoning, and when the source is one of the most respected vehicles of journalism, it seems sicker.

Centuries ago, in another, more holy writing, the prophet Isaiah warned in Isaiah 5:20:

Woe to those who call evil good, and good evil;
Who put darkness for light, and light for darkness;
Who put bitter for sweet, and sweet for bitter!

The New York Times has chosen to call evil good and darkness light.