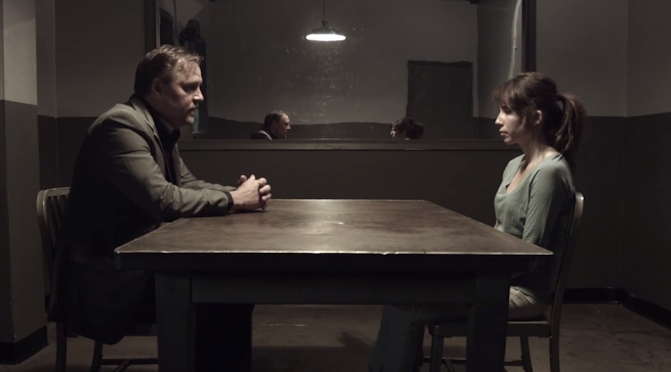 “You have to do what’s best for you,” an interrogator says in a room that looks like a police station.

With this opening, viewers are in for a surprise in this new pro-life short film, “The Appointment – a mother’s choice,” both directed and partly produced by filmmaker Brandon Rice.

We see the prisoner, bound in cuffs, behind the screen, but the interrogator says, “What’s in that room is irrelevant… The only significance he has is what you decide to give him.”

The words sound like a pro-abortion argument, but the film uses a twist that will cause viewers to see abortion in a new light. When it comes to controversial issues, it is often difficult to say something new which keeps people from tuning out. That’s the power of this film; it makes people look at abortion differently. And that was the goal.

Behind the scenes with the cast and crew of “The Appointment.”

Rice says he purposely did not make the film either blatantly pro-life or overtly Christian. He says that by not having these overt overtones, the film becomes more accessible to all people, not just the usual pro-life Christian viewers, so they wouldn’t be instantly turned off by a label they might not desire. He says:

“If people without a religious faith see it, it may cause them to think and choose life anyway.”

The ending is powerful and shines light on the real “choice” of abortion a subtle but powerful way. This is what Rice and the filmmakers with this project, which he says he didn’t want to be an “in your face” message movie.

Rice’s vision for the film came about when he was sitting in church on Memorial Day. The pastor made a comment about having a moment of silence for everyone who had died in war, and how it would take years of silence to do that. “It was a crazy amount of time,” he noted. But what the pastor said next moved him more. He said that if you had to have a moment of silence for every aborted child, then it would have to be, as Rice puts it, “astronomically” more time than for the soldiers that had been killed. “I was just like blown away by that; it just hit me really hard.” Later that day, he told his wife he really wanted to do something to highlight the problem of abortion. He says:

“I just don’t see how you could ever even consider it. And I hope that there are more children in the world because of this movie, Even if it’s just one child.

“We’re getting up in arms about all these other… social issues and every single day every single day this is happening and it’s kind of been put to the side a little bit I think. It’s funny because we care more about animals being put down and shelters them we do about babies. We should have adoption drives for babies not animals.” Behind the scenes filming in Southern California of the short film, “The Appointment.”

His passion for the subject was matched by his filmmaking friends. Matt Green and Anthony Tyler Quinn had already written a script for the short film; Rice loved it and asked to direct it. Rice feels short films are “a good way to communicate something to someone in a short chunk.”

The group ran an immensely successful Kickstarter campaign to fund the film. They’re not charging for the film because they think it’s important for people to see. Rice says:

“At the end of the day, all the main crew members and the creators behind it, really the heart is to see this affect people’s lives to the point that they will make the choice to let their babies survive.

“When you have passion involved in something at that level, I just think it just shows on screen.” He also sees the reality of his 3-year old daughter’s development: “I look at my daughter and I see how she has developed from this infant, even before she was an infant when she was still developing in pregnancy… Not being able to do anything, and now she’s three and she can’t stop talking. “