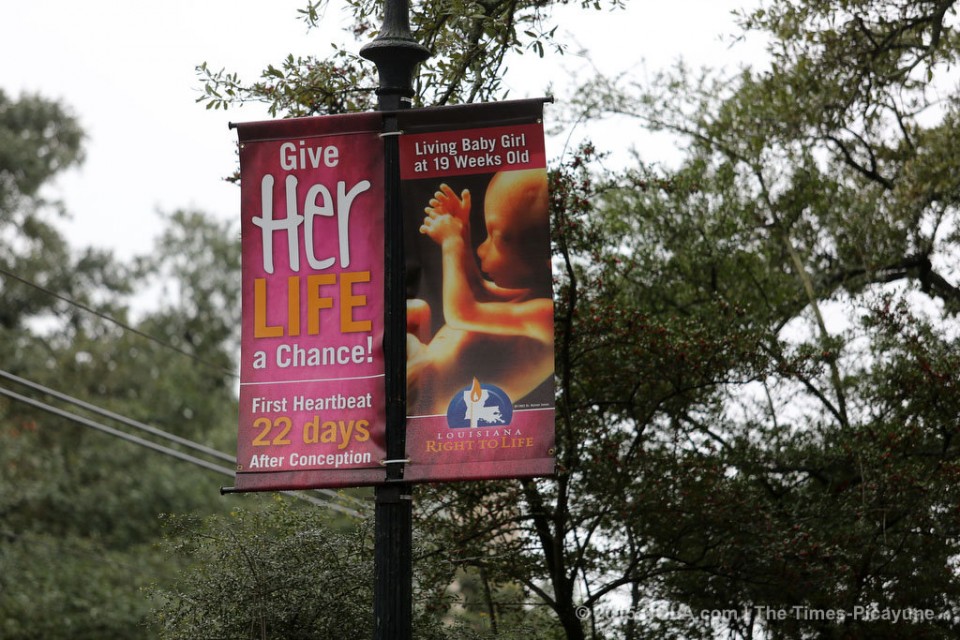 Today’s battle in pro-aborts’ never-ending struggle against free speech comes from New Orleans, where City Councilwoman Stacy Head is calling for removal of pro-life banners (pictured above) from city streetlights.

New Orleans allows “community awareness banners” to be temporarily placed on streetlights provided they are not for commercial advertising or promoting a specific political campaign. Accordingly, Louisiana Right to Life put up the banners which display an image of an 19-week-old preborn girl, the fact that heartbeats begin 22 days after conception, and the message “Give Her Life a Chance!”

That was enough to get Head to start crying patriarchy…

I’d like to see in writing for every council member the price and the process for putting signage along St. Charles Avenue and specifically I’m talking about the political, what I’d consider to be political signage that is put on for particular political position that I perceive as a nuisance, I perceive it as offensive, I do not see it as community awareness, and I do believe it is negatively impacted my belief about my civil liberties as a woman, and I believe that I am being discriminated against.

I understand that the administration has very strong feelings about, they get to decide what is allowed and what is not allowed on our public spaces with regard to visions, with regard to images, with regard to symbols, who we are gonna be in 2018, so since they are the arbiters of those items, I think it is very important that we understand what the methodology is for placing those signs, the cost of placing those signs, the process for placing those signs, and what the decision-making process is, and who gets to decide that for us, since we are looking to the administration to decide what objects and symbols are appropriate for the city, on city property, which ones offend us, which ones are negative, which ones are, and whether or not maybe I as a woman would have standing if I believe and feel that the nuisance that I have to see impacts negatively my civil liberties.

In point of fact, much of the information she’s demanding is already a matter of public record—the applicant is responsible for the actual mounting work and the cost of whatever additional hardware necessary, may have to pay a rental fee, and the deciding body is the Downtown Development District. Another great moment in public officials being informed about their subject matter…

But Head’s lack of preparedness is nothing compared to the sense of entitlement on display here. To say that the mere sight of a differing point of view—and in this case, an expression of that view comprised solely of an inoffensive picture, a true fact, and a respectfully-phrased plea—constitutes “discrimination” and a “civil liberties” infringement is so preposterous that the only appropriate reaction from her colleagues would have been to burst into laughter.

No, Councilwoman, seeing speech you disapprove of isn’t hurting your rights—one reason for that being that there is no right to never see contrasting thought in public, and the other being you don’t actually have a constitutional right to what the banners are challenging. All they’re doing is putting a face to your policy’s victims, or as Louisiana Right to Life executive director Ben Clapper put it, reminding residents that “this is what we all looked like at that stage of development and we should cherish that.”

From buffer zones to lawsuits over billboards to this, pro-aborts have never respected the right to free speech any more than they respect the right to life. Part of that is simple greed and arrogance, but in this case it’s also fair to say that fear of the truth is also a powerful motivator. If your reaction to the sight of a baby and a plea to show her a little compassion is to lash out so viscerally and disproportionately, that’s probably a sign the message got to you more than you’re willing to admit.

Some part of Stacy Head knows what the banner means for her support of abortion, so she hopes that getting it out of her sight can help make her willful denial a little less uncomfortable.