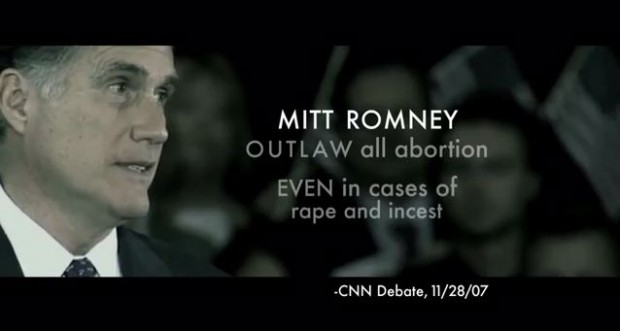 Finding the best point between principle and reality. 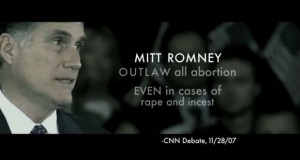 During the Republican presidential primary, Mitt Romney’s opponents tried to take him down by using his former support for legal abortion as proof that he’s not really pro-life. In the general election, Barack Obama is taking the opposite approach by characterizing the ex-Massachusetts governor as an anti-choice radical.

As usual, when pro-aborts try to push the extremism card, they’ve come up short in the accuracy department. This week, FactCheck.org tore apart an Obama campaign ad claiming that Romney “backed a law that outlaws all abortions, even in cases of rape and incest.”

First, they note that there was no such law under consideration, merely a hypothetical question posed to Romney that didn’t specify any of the so-called hard cases:

A.J. from Millstone, New Jersey, Nov. 28, 2007: If hypothetically Roe versus Wade was overturned, and the Congress passed a federal ban on all abortion, and it came to your desk, would you sign it? Yes or no?

Romney: I agree with Senator (Fred) Thompson, which is we should overturn Roe v. Wade and return these issues to the states. I would welcome a circumstance where there was such a consensus in this country that we said, we don’t want to have abortion in this country at all, period. That would be wonderful. I’d be delighted.

CNN’s Anderson Cooper: The question is: Would you sign that bill?

Romney: Let me say it. I’d be delighted to sign that bill. But that’s not where we are. That’s not where America is today. Where America is is ready to overturn Roe v. Wade and return to the states that authority. But if the Congress got there, we had that kind of consensus in the country, terrific.

Second, FactCheck points out that throughout both of his presidential bids, Romney has consistently specified that he makes exceptions for rape, incest, and to save the mother’s life.

So much for that line of attack; despite what Team Obama wants the country to believe, Romney’s true pro-life platform lines up just fine with mainstream opinion on abortion. However, it raises another question as to whether 100% pro-lifers can accept laws and politicians who make such compromises with abortion.

As a matter of principle, I don’t accept rape or incest as justifications for abortion, and I agree with Josh Brahm’s take on life-of-the-mother cases. I believe that our goal should be full legal protection for all innocent human beings, regardless of what their fathers did, and I believe that every effort should be made to save both patients in dangerous pregnancies. Romney’s more moderate position may be more politically expedient or even rooted in genuine compassion for rape victims, but it’s not morally or logically consistent.

And yet, those exceptions don’t prevent me from supporting laws that contain them, nor do they disqualify politicians who accommodate them, for the same reason that pro-lifers can support laws that ban only sex-selective abortions, or ban only partial-birth abortions, or place only requirements like ultrasound viewing or parental consent on the procedure.

In a democratic society where decisions are ultimately made by over 300 million people of widely differing views and values, principles can’t be implemented with perfect consistency until enough people are convinced to do so. Government can prohibit only as many abortions as the public will allow it to, and with only 20% of Americans in the no-exceptions category, rape and incest exceptions simply won’t be uprooted until after abortion on demand is.

Partial legal protection for the unborn may not be ideal, but it pushes both the law and the culture in the right direction, by dramatically narrowing the range of acceptable justifications for abortion and acclimating the public to think of the unborn more as victims and less as objects. We save as many babies as we can today, and work to convince our fellow citizens to save the rest tomorrow.

What do you think? Where do you believe pro-lifers should draw the line between principled concessions to practical reality and unacceptable compromises of our core principles?