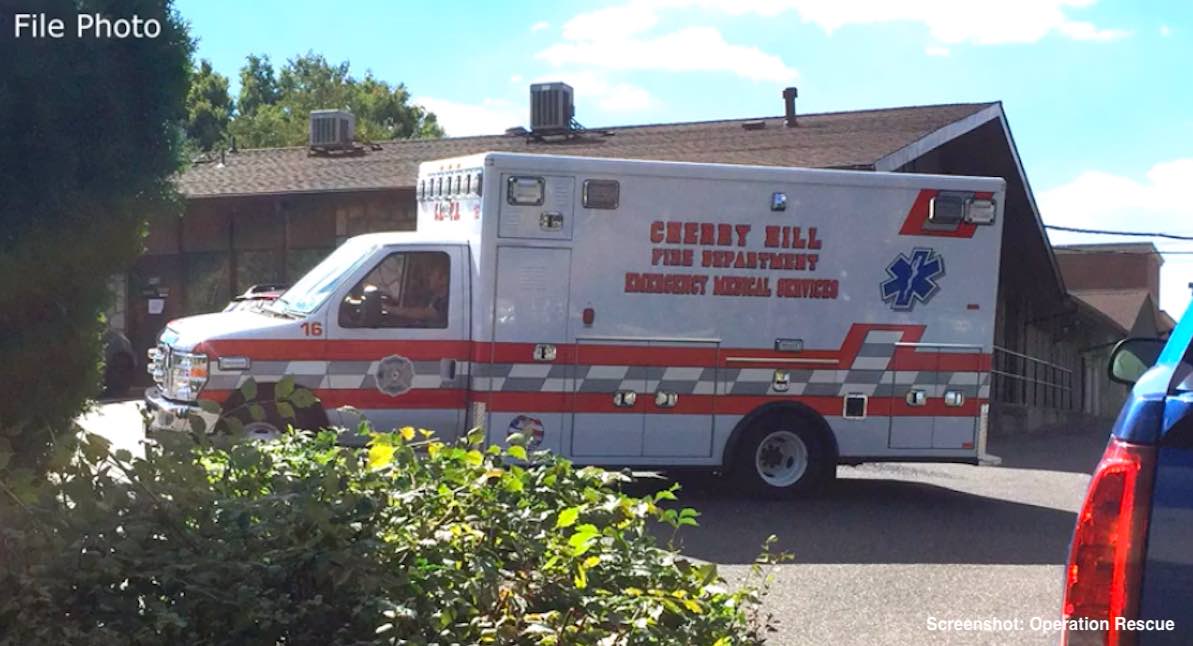 On November 14th, a patient at Cherry Hill Women’s Center in New Jersey severely hemorrhaged after having a surgical abortion. The abortion facility attempted to stop the hemorrhaging but postponed calling an ambulance until it was almost too late. Once staff did call, the fragile state of the hemorrhaging patient was understated as the caller described the situation to the emergency responder. Operation Rescue published its report of the situation as well as the 911 call from the abortion facility.

“So I’m calling with a patient that had an abortion procedure, and afterwards had some post-abortal bleeding… uh, we did give her a TXA and she does have two IVs in place. Her vitals are stable. She’s 21 years old.”

The caller’s tone remains remarkably relaxed and he behaves almost as if this were a routine part of the job. The term “TXA” refers to a medication called tranexamic acid, which, according to Drugs.com, is “used to treat heavy bleeding during monthly periods (menstruation).” While this medication works for some, it appears not to have worked for this patient, as other measures were taken to stop the bleeding. Hypovolemic shock follows when over a fifth of the body’s blood and fluids have been depleted. The “two IVs” implemented were a desperate way to refresh the patient’s fluids as she bled and aimed to lengthen the amount of time the patient would have before shock set in — but this would have only temporarily helped her survive.

“And she’s packed. She’s stable, but she had more bleeding than the doctor would like after surgery.”

To be “packed” means that a vaginal tamponade was used to absorb the bleeding in hopes that it would eventually stop — a last resort to stop the damage of the botched abortion. This is not the first ambulance call to Cherry Hill Women’s Center, as noted in Operation Rescue’s detailed accounts. OR recorded other ambulance visits to the facility on October 1, 2019, September 21, 2019, October 16, 2018, March 1, 2018, and September 14th of 2016. In addition, over the past three years, there have been at least four instances of serious injuries at this abortion facility.

In another instance of negligence, on October 12, 2018, an ambulance was summoned under the premise that a patient was “miscarrying” in the Cherry Hill facility. A much more recent instance on September 21st of this year — reported here by Live Action News — details how another woman, after receiving a 24-week abortion, suffered from severe hemorrhaging there.

The carelessness shown by Cherry Hill Women’s Center is not limited to this facility. It is increasingly common for abortion facilities across the nation. Not only are preborn children butchered every day, but women are severely injured and sometimes even killed, despite the legality of abortion.