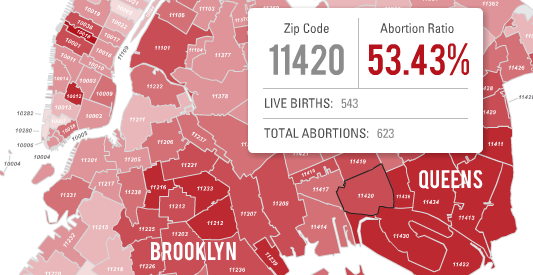 The Chiaroscuro Foundation, which has been working to raise awareness of New York City’s shocking abortion rate (nearly double the national average), just released a new interactive map where you can see by zip code the ratio of abortions to live births from 2000-2009 in the five boroughs of New York.

They’ve compiled the data to encourage New Yorkers to join their local efforts to reduce the abortion rate, according to their press release.

Greg Pfundstein, the executive director of the Chiaroscuro Foundation, explains how this new data reveals what Roe v. Wade has actually meant for women and the unborn in America’s most populous city:

New York City’s abortion regime is America’s abortion regime: What is emanating from the penumbras of the Constitution is the fact that in parts of Jamaica, Queens, over the last ten years, six out of every ten women with a viable pregnancy procured an abortion. –National Review’s The Corner Blog

As Pfundstein points out, this is not what Americans want:

Sadly, as the Chiaroscuro Foundation’s map demonstrates in painstaking detail, things are very different in reality. My mother’s family came from Brooklyn, and I was saddened to see that Brooklyn has some of the highest abortion rates in the entire city – and it’s not getting any better.

Becky Marchinda reflects on what these statistics mean to her, as someone who has lived in New York.