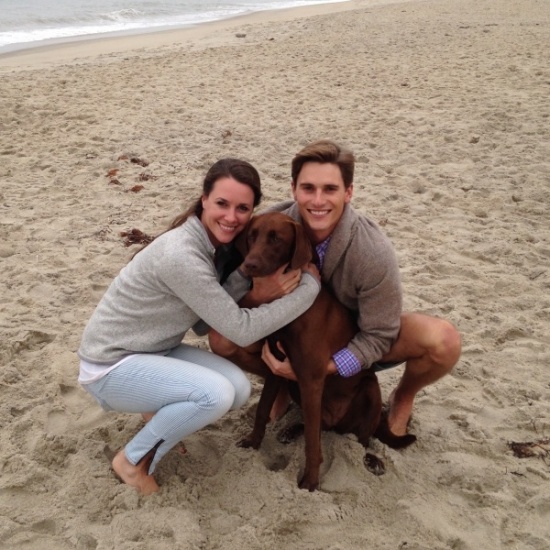 UPDATE: Baby Tenley was born on April 16, 2017 – the day before her father was set to run the Boston Marathon in her honor. Perhaps she wanted to cheer him on.

Oliver Foley has run the Boston Marathon before, but this year on April 17, it will bring on new meaning for him and his wife Kinnon because he has new love running through his veins. His devotion to his preborn daughter Tenley will be the force behind him as he heads to the finish line. At 11 weeks gestation, the couple learned that their first child has Down syndrome, and while it wasn’t the easiest news to hear, their love for their daughter has overpowered any concerns and fears they have for her life.

“It was really hard at first,“ Kinnon Foley told WBZ. “You have this vision of who your child is when you’re pregnant and to get something that changes what that vision is is really challenging.”

The couple’s doctors connected them with the Massachusetts Down Syndrome Congress (MDSC), a group with the mission to “ensure individuals with Down syndrome in Massachusetts are valued, included, and given the opportunities to pursue fulfilling lives.” They work to educate families and the public about Down syndrome and to advocate for people with the condition.

“They have the perspective that this isn’t something to be sad about. Your life and the lives of your friends and family will be enriched by your daughter,” explained Oliver Foley.

Each year MDSC is represented in the Boston Marathon, and this year they had one bib left. Oliver Foley jumped at the opportunity to run for the organization that was providing so much help and hope to his family.

“This just seemed like the perfect opportunity to do it and raise money for a cause that’s incredibly personal to us,” he said. “We know that every dollar raised for MDSC our daughter, over the course of her lifetime, will get 10 times that back in terms of compassion and support from them.”

Tenley isn’t the first person with Down syndrome to touch the couple’s lives. Kinnon Foley’s late uncle Chris McCall also lived with the condition. McCall died in 2012 at age 65. Amazingly, Tenley is due to be born on his birthday, May third.

“I was very close to him,” Kinnon Foley told ABC News of her uncle. “He was the most wonderful, loving, kind person. He brought incredible joy to his siblings and profoundly affected my mom and dad’s lives.”

“It was unusual that my grandparents would take him home and raise him,” she continued. “But they became huge advocates for people with DS, and in many ways, Chris paved the way for Tenley.”

Oliver Foley’s original fundraising goal was $15,000. He has now raised over $64,000 and climbing. On his Crowd Rise page he wrote:

[…] we have already benefited from MDSC in a number of ways, most important among them is the way in which they guided us through the mixed emotions that came with the diagnosis. They showed us just how bright Tenley’s future will be and that no matter what obstacles she faces, she will always have the dedicated people at MDSC in her corner. MDSC also connected us with other parents who emphasized that the most powerful force in helping Tenley realize her potential will be the unconditional love and support of her family, extended family, and the broader community.

Dr. Brian Skotko, a medical geneticist and an assistant professor at Harvard Medical School, runs the Down syndrome clinic at Massachusetts General Hospital and agrees with Oliver Foley’s statement that the community plays a part in helping people with Down syndrome live up to their true potential.

“People with Down syndrome are achieving previously unimagined successes, thanks in part to advances in medical care and innovation,” he told ABC News. “However, I think that most of the remaining barriers come not from medical limitations but from social ones. Until our schools, communities and workplaces become fully inclusive, our work is not complete.”

The couple believes that their daughter will be able to help change perceptions about people with Down syndrome and they are dedicated to helping her to realize her dreams.

“What we want for her is nothing different than what any parent wants for a child,” said Kinnon Foley. “We want her to feel happy and loved by her community.”

When doctors and organizations like MDSC work together with families, they help couples experiencing a prenatal diagnosis to see the value in their child’s life despite any challenges. Tenley will live a beautiful life guided by loving and committed parents and a vast support network.