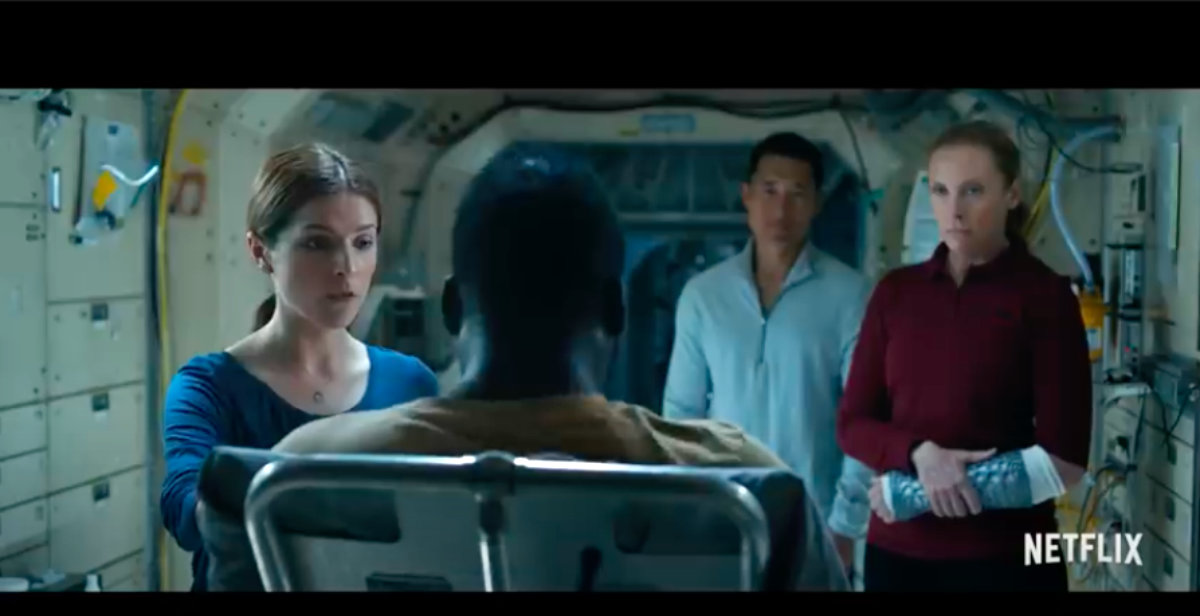 This month, “Stowaway” brings the pro-life worldview into popular culture. The science-fiction drama (rated for mature audiences-MA) released on Netflix follows the ethical dilemma of a crew en route to Mars. The ship, led by Commander Marina Barnett (Toni Collette), is on a two-year mission to a colony on Mars. Conducting research aimed at advancing colonization are a biologist David Kim (Daniel Dae Kim), and medical doctor Zoe Levenson (Anna Kendrick). The mission is jeopardized when the crew unexpectedly discovers a technician, Michael (Shamier Anderson), on board and learn that there is not enough oxygen for all the people on board safely to reach Mars. Unable to turn back and unable to resupply, they are trapped.

The crisis divides the crew. Barnett calculates that they have 20 days before the ship will not be able to support all four people for the duration of the flight. She and Kim are strongly in favor of preserving the excess oxygen in case there are further complications that endanger their air supply. They advocate killing Michael to ensure that there is enough air for the three planned crewmembers, who are highly trained and critical to the success of their collective work. Levenson, on the other hand, argues that there is the possibility of finding a way to save Michael and urges her colleagues to use all the time they have to try to find a solution.

The film, written by Joe Penna and Ryan Morrison, could have turned into a space slasher/thriller with Barnett and Kim attacking Michael. Instead, the filmmakers opted for a quiet, claustrophobic drama between the characters. In the exploration of how the characters might respond to the crisis, the film presents fundamentally opposed worldviews that exist in our culture: one that is pro-life and one that demands solutions that threaten the lives of the vulnerable.

Killing presented as the compassionate solution

It does not take an ideologically obsessed pro-lifer to see the ethical parallels in “Stowaway” to abortion and assisted suicide. Michael is an unexpected addition to the crew in a precarious situation, just as victims of abortion are most often the result of unintended pregnancies in families that are under emotional and financial strain. The crewmembers are highly intelligent and well trained, while Michael is out of place on the mission, vulnerable by virtue of his “non-essential” nature. Where Levenson insists there is still hope of saving the lives of everyone on board, Barnett and Kim are convinced that there is no possibility. In a similar way, people who have chosen abortion in difficult circumstances describe the decision as “abandoning hope.”

Barnett and Kim, like people discussing abortion, cannot bring themselves to say directly how they think Michael should be killed. Like all socially sanctioned dehumanization, killing the vulnerable relies on euphemism. Abortion activists do not discuss the gruesome killing of a preborn baby whose heart is beating, whose limbs have formed. They focus on the reasons why a mother might choose to end her baby’s life. Likewise, Barnett and Kim do not face the violence and barbaric destruction of ending a human life, yet they are insistent that the only solution is killing Michael.

Far from a small baby in the womb, Michael has a large physical presence. The crew cannot ignore his obvious humanity, especially the longer he lives and interacts with them, and he cannot be killed discretely out of sight. Because of this, Kim goes directly to Michael and attempts to convince him that the right thing to do is for him to end his own life in order to give the rest of the crew a better chance of survival.

Death by lethal injection is the same “compassionate” option offered to vulnerable patients where assisted suicide is legal. The rationale given is also similar. In places that have legalized assisted suicide, we have already seen a rationing of care and an attempt to convince people with disabilities that they are better off dead. Like abortion, assisted suicide preys on the vulnerable. People who are afraid of becoming a burden to others, people who are told their lives are not worth living, are given the choice to end their lives, a “choice” that can feel like a demand.

The heart of the pro-life worldview

Levenson is rightly horrified by Kim’s supplying Michael with a lethal injection and confiscates it. Levenson, whose first name (Zoe) means “life,” offers an alternative to killing. There is no technological means of creating more oxygen, a fact that Levenson recognizes and does not ignore, but she refuses to resort to killing in order to stay alive. Levenson holds on to hope that the booster rocket still docked to the ship has liquid oxygen, which she risks her life to procure. Ultimately, she chooses to sacrifice her life to make one last attempt to ensure that the other crew members and Michael have a chance of making it to Mars.

The difference between pressuring a vulnerable person to end his life to keep from being a “burden” to others and a heroic person choosing to risk her life to preserve the lives of the vulnerable could not be more starkly displayed. This vision of hope is at the heart of the pro-life worldview. Netflix, usually known for promoting suicide and abortion, surprises with this thoughtful drama about what it means to be human.

Unlike a small ship hurtling through the vacuum of space, there are resources available to mothers experiencing unplanned pregnancies and vulnerable patients facing difficult diagnoses. True compassion may require self-sacrifice on the part of the strong, but in a healthy society, this is freely given. “Stowaway” offers the viewer a choice about the kind of society in which we want to live: one that demands the killing of the weak or one that challenges the powerful freely to sacrifice.