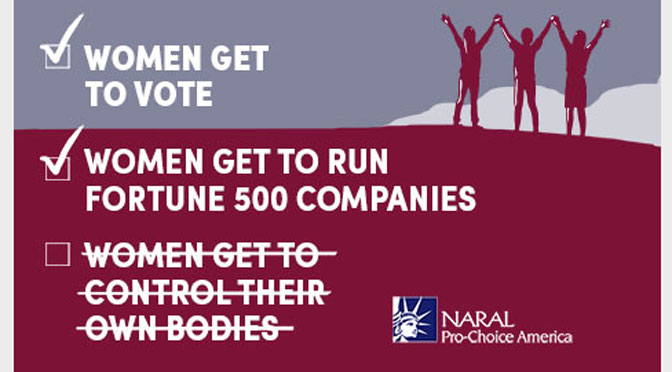 NARAL is no stranger to wrapping and re-wrapping a hopelessly ugly package in attempts to make it appealing. The organization has changed names several times since its founding in 1969 (it was originally the National Association for the Repeal of Abortion Laws, unabashedly focused on making abortion legal). It wasn’t until 2003 that they finally took the word “abortion” out of their name.

As we learned in the story of Planned Parenthood awarding Reverend Martin Luther King, Jr. their highest honor, abortion advocacy organizations have long been aware of how unappealing their cause really is, and must continue to find ways to make their ideas seem not only socially acceptable, but necessary.

Now, though NARAL Pro-Choice America warns that women’s abortion rights and reproductive choices are imminently threatened, they evidently feel the current zeitgeist is welcoming enough to their agenda that they can broadcast strategies indiscriminately on the internet. On a backdrop populated with relatively androgynous graphics, NARAL’s social media banners proclaim defense for women. Most declare one way or another that women’s success in other avenues of life is dampened by a lack of freedom to control their own bodies in the United States (when exactly they would have that control begin is uncertain, considering they don’t acknowledge bodily personhood in the womb).

“In 2016 we will have a Supreme Court case and an election that could redefine the issue of abortion in this country,” NARAL announces at the bottom of the page. “We win or we lose depending on whether or not we can get pro-choice advocates engaged.” This fear comes ahead of the Supreme Court hearing Whole Woman’s Health v. Cole, a lawsuit that began when the abortion lobby found Texas’ requirements – i.e., that abortionists must have admitting privileges to local hospitals and provide pregnant women with phone numbers to the abortion facility and nearest emergency location should something go wrong – to be too restrictive for their practice. The panic about the upcoming election comes following NARAL’s endorsement of scandal-ridden former Secretary of State Hillary Clinton in the presidential race.

“Every woman deserves access to abortion care, regardless of how much money she has,” says one new straightforward slogan from NARAL. At least that clearly illustrates their primary concern is abortion care, not healthcare.