These days the in thing for abortion advocates seems to be defending abortion at all costs. We recently told you of the disgraceful editorial in the Des Moines Register which defended a mom endangering her daughter by illegally performing a medical abortion on her.

Now NARAL Pro-Choice America is jumping on the abortion-no-matter-what bandwagon and has issued a statement defending the illegal abortion, as well as taking responsibility off the person committing the crime.

NARAL’s latest rhetoric blames the state of Pennsylvania for the woman’s dangerous decision. Because PA doesn’t allow anyone who wants to perform abortions, NARAL says the mom was desperate and, essentially, had no choice because the politicians made her do it:

“Jennifer didn’t have many options, and made a desperate decision to buy her daughter the abortion pill online. A round trip to the nearest in-state clinic is 150 miles, and Pennsylvania has a mandatory waiting period which would have meant making the trip twice in as many days or staying overnight. As a full-time personal-care aide at an assisted-living center, that would’ve been very difficult. On top of all this, her daughter doesn’t have health insurance to cover the cost of abortion service at a doctor’s office or hospital.“

“The terrible anti-choice laws in Pennsylvania are forcing desperate women to make desperate decisions – and they’re being thrown in jail instead of getting the medical care they need. Instead of sentencing family members, you need to expand women’s fundamental reproductive freedoms.”

The problem with what NARAL says is that it’s all untrue. No one was “forced” to do anything. A woman made a choice to break the law and risk her teenager daughter’s health in the process. Abortion is legal and accessible in PA and a person’s unwillingness to drive just over one hour each way to obtain a procedure is not an undue political restriction, but is simply a fact of medical care of all sorts in this nation. This includes actual medical emergencies where people’s lives and health are in danger. The entire country does not live less than an hour from all the medical care needed. This excuse for committing a multitude of crimes is inexcusable.

Additionally, there was no evidence presented that this mom did anything substantial to secure a legal abortion. This is not a tragic story of a woman restricted from medical care, as many are portraying it.

She may say she was feeling desperate, but she doesn’t say anything about using the vast number of abortion resources she could have used if she truly wanted to “help” her daughter have an abortion without risking her health by feeding her an unregulated death pill.  Planned Parenthood, for example, claims to help poor women who need abortions. And there are numerous funds that ante up and pay for abortions. The (lack of) morality aside in raising money for the sole purpose of killing people, there certainly were places this woman could have gained assistance to kill her grandchild. None of those avenues required her to commit crimes that endangered her daughter’s life. None required her to purchase an unregulated foreign version of a pill that kills babies.

It must be noted that NARAL is defending a criminal act. At her sentencing, the judge said:

“A practitioner might be able to perform this, but a lay person is not permitted to take this kind of responsibility which is a huge responsibility. This was somebody taking life and law into their own hands.”

This was echoed by the prosecutor, as well, who said:

“[I]t is vital to note that this case is not about pro-life or pro-choice. In actuality, this case is about endangering the welfare of a child through the unauthorized practice of medicine and pharmacy. Specifically, the defendant was arrested for a failed abortion attempt which caused significant medical complications for a juvenile and required emergency hospital intervention. That intervention in turn triggered a mandatory reporting requirement under Pennsylvania law with regard to suspected or actual child abuse.”

It’s illegal in 39 states to perform an abortion if one is not a physician. Some, like NARAL, say this forces people into illegal abortions. The question people should be asking is if they want to trust their bodies to just anyone. Abortion is a serious medical procedure which, even in a medical abortion, is invasive. Of course people need medical training to do it; this is not like taking cough medicine.   Further, she didn’t make this decision about her own body but about someone else’s, a minor for whom she was responsible to care and protect. 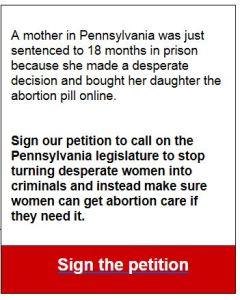 This graphic is from the NARAL email in which they defended the use of unregulated medicine to perform a dangerous self-abortion.

But NARAL is so concerned with the right to abort no matter what the circumstances that it actually has the gall to blame the state of PA for a woman committing a crime that endangered her teenage daughter. NARAL says:

“We need to bring state politicians face to face with the consequences of their actions and hold them accountable.”

There is, however, no accountability necessary for this mother, according to NARAL. In fact, the entire petition seeks to erase her crime and all stigma of committing it because she was “forced” into it by laws the abortion industry doesn’t like.

“[W]e can all agree that the real offenders here are the politicians who’ve put abortion out of reach for so many women.”

Apparently when abortion is the issue, there is no need for anyone to follow the law. According to NARAL, we may abdicate personal responsibility and accountability if we “need” an abortion. That is, perhaps, the most troubling part of all.