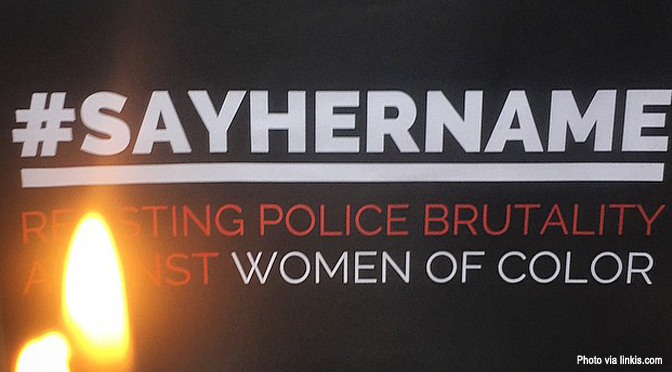 Somehow, a July 23 blog post from NARAL Pro-Choice Ohio managed to equate videos from the Center for Medical Progress showing top Planned Parenthood employees discussing their fetal parts business and the death of Sandra Bland, a black woman who committed suicide while in police custody. I’m not kidding: “Both are infuriating, but in very distinct ways. Both involve reproductive justice issues.”

The post rants at length about, with original emphasis, “WHITE PRIVILEGE,” as well as the popular slogans of #BlackLivesMatter, #SayHerName, and #IfIDieInPoliceCustody.

For all the discussion about race though, the post never once mentions how blacks are disproportionately affected by abortion at such high levels, or how Planned Parenthood is and always has been a killer of blacks, or how abortion is the number one killer of blacks.

One impassioned paragraph is particularly ironic:

As reproductive rights activists we cannot continue to say that this is not our fight. As others have said much more eloquently than I ever could, “You deserve to parent your child without fear that he or she will be killed.” Freedom from violence IS a reproductive justice issue. Safe neighborhoods, equal treatment under the law—all of these things ARE reproductive justice issues. Our rights, our justice—they are intertwined. Until we fully realize this and work intersectionally, we will never create the world that we dream.

NARAL’s  post talks about “freedom from violence” as a “reproductive justice issue,” even driving the point home with caps. But what about the lives of preborn children? Abortion is the ultimate form of violence. How can we fight for these to have the above-mentioned rights if we don’t even allow them to be born?

The post goes to great lengths to support ‘justice’ for women, but pays zero attention to women killed by abortionists – like Tonya Reaves, a black woman who died from an abortion at Planned Parenthood in Chicago when she was just 24. She could perhaps fit the post’s narrative on justice for black women, but no mention is made of her. This post and the pro-abortion organization which published it clearly do not care about preborn children – but what about their mothers?

The post equates the tragedy of a woman who committed suicide while in police custody with “reproductive justice issues” but not with the needless deaths of women killed from their abortions. Undergoing a procedure that will not only kill your baby, but may very well get you harmed, maimed, or killed in the process seems like a reproductive rights issue to me. Abortion may be legal, but it certainly is not safe.

Live Action has documented Planned Parenthood abortion businesses lying about the safety of the abortion procedure. That’s some “reproductive justice” there.

On July 24, Katherine Marple responded to the NARAL Pro-Choice Ohio post for Keep Life Legal. Marple made just that very point, that “Big Abortion” doesn’t care about or pay any attention to those women killed by abortion (with original emphasis):

Women who have died from botch [sic] abortion are faceless and nameless to Big Abortion. They are collateral damage, taking one for the team. There is no parade, there is no ‘die-in’, no notoriety from the White House. But in Ohio as recently as March of  2014, a young woman died from a heart attack as a result of her abortion. I SAY HER NAME: Lakisha Wilson. Lakisha cannot tell her story, she was targeted by Big Abortion, her pain and voice will never be heard. But I SAY HER NAME.

Wilson is another woman who would suit the narrative of NARAL Pro-Choice Ohio well, for she is a black woman who died from her abortion and was even from the same state. But she gets no mention.

It’s a shame that NARAL Pro-Choice Ohio can devote a whole ranting piece to Sandra Bland, but not even a kind, sympathetic word to Lakisha Wilson, Tonya Reaves, or the numerous other women killed by their legal and so-called safe abortions.