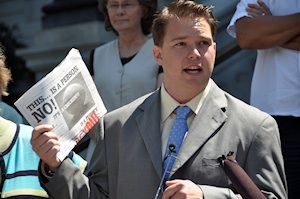 “As long as I have arms, I’m gonna be swinging them.”

The most recent issue of Newsweek magazine (July 2 & 9, 2012) features a behind-the-scenes look at the burgeoning personhood movement. It highlights Keith and Jennifer Mason of Personhood USA and their journey to found one of the largest and fastest-growing pro-life groups in the country.

And you know what’s shocking? It’s a positive review. Instead of portraying the Masons as extreme misogynistic prudes leading the charge in the “War on Women,” Newsweek portrays the personhood movement as cool, edgy, youthful, and – most importantly – growing. In less than five years, Personhood USA has begun initiatives in all 50 states through more than 80,000 volunteers who have already collected more than a million signatures to abolish abortion.

That kind of progress, fairly reported in a balanced article by a major news outlet, scares abortion advocates. For them, the idea of pro-life activists being presented to the public as cool is simply too much to bear! No wonder NARAL called it a “jarring interview” on Twitter. In the article, NARAL admitted that personhood is “the more honest conversation to have” and bemoaned the fact that Personhood USA has a “formidable presence in every state.”

They’re right. Personhood USA is now collecting signatures for ballot efforts in Colorado, Ohio, and Montana for the November elections and in Florida for 2014. It’s a long road ahead, but, Keith tells Newsweek, “[a]s long as I have arms, I’m gonna be swinging them.”