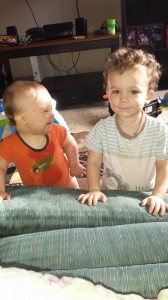 To her, she was making some kind of noble choice because he otherwise would have had a miserable, empty, meaningless life. Richard Dawkins caused a huge controversy when he argued that it was immoral to knowingly give birth to a baby with Down syndrome — he claimed that the moral and ethical thing to do would be to have an abortion.

In a similar vein, one mother has opened up about her reasons for aborting her son with Down syndrome: he just would have been too much of a burden on their family.

For the tiny baby I’d just given birth to — a much-wanted brother for our daughter Delilah — never took a breath outside my body. We, his parents, chose to end his life before it started.

Days earlier, tests had shown that our darling boy had Down’s syndrome, as well as a host of severe health problems. So Tim and I had made the excruciating decision to terminate my pregnancy at 15 weeks and three days.

I’d delivered Oscar naturally after taking medication to end his life, and bring on labour. Yet that didn’t stop us loving him with all our hearts and believing we had done what was best for our family, and indeed for our son.

… Having known children with disabilities through my mum’s work as a child-minder, I knew what full and valuable lives they can lead.

… There are 60,000 people with the condition in the UK and the life expectancy of a child born with DS today is up to 60 years old. If a child with DS had been created, weren’t we — two loving, happily married people, its parents — the best placed to look after it?

But would it be fair on Delilah when inevitably a child with DS would require so much of our attention?

… A termination was the kindest option for our son but also the most agonising for us.

… Incredibly, the night before I delivered him, I felt those first fluttery kicks inside me and dissolved into tears, relieved that I could feel my son, but distraught that I was about to lose him. 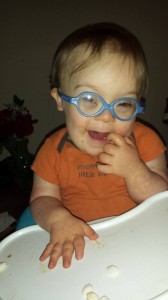 It must first be pointed out that there was some massive cognitive dissonance going on here. She continually talks about how horrible it is that she was going to “lose” her son, but ignores that the reason was because she was going to kill him.

She didn’t lose anything. She threw her son’s life away because he didn’t fit her definition of perfect, and then somehow warped that reality so that she could paint herself as a victim, a distraught mother who lost a child. They decided that it was better to deprive their child of life because he had an extra chromosome, and even though they acknowledged the medical advances that have benefitted people with Down syndrome, and that people with Down syndrome can lead successful lives, they still chose to kill him.

They killed him because they thought he would be too much of a burden to their family.

I found out that my son, Wyatt, had Down syndrome while I was pregnant, too. My older son, Benjamin, wasn’t even a year old yet. My husband had just deployed to Afghanistan. He would not be home for the birth of this child. I was around 15 weeks pregnant, I was alone — and abortion was never an option for me. That doesn’t mean that I wasn’t scared. I was devastated, terrified. I cried for days. But being a mother means that you love your child unconditionally. You don’t only love your child if they meet certain criteria, and you definitely don’t get to claim that you love your child after you make the decision to kill them.

The weeks after receiving the diagnosis were difficult. It took time to accept it and find the strength to start doing research, but the important thing is that acceptance did come. When Wyatt was born, it was a joyful day. We were thrilled to welcome another beautiful baby into our family. Our family was made complete with his addition, not burdened by it. He is a happy, healthy little boy, and we have never regretted keeping him. How many people who choose to have abortions can say that? 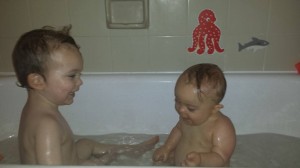 Now, two years later, we have three kids. There are parts of raising a child with Down syndrome that are a little more difficult, yes, but for the most part, Wyatt is just a normal toddler.

Seeing the relationship he has with my other children is one of the best parts of raising them. He and Benjamin chase each other around the house, play hide-and-seek together. They share a room, and if they don’t sleep in the same room for whatever reason, Benjamin eagerly races ahead of me to wake Wyatt up, running to his crib to see him.

Our youngest idolizes Wyatt, although he would rather try to keep up with his big brother. I have no doubt whatsoever that they will grow up to be Wyatt’s biggest defenders and advocates, because they love their brother. People aren’t born being intolerant of people with disabilities; they’re taught that.

My other kids don’t know that something is different about Wyatt. To them, Wyatt is just a person, their brother, and they’re right. Wyatt isn’t defined by his extra chromosome. This woman, however, has ensured that her children will grow up being unaccepting and scared of disabilities and people who are different, especially if they ever read her very public confession. They’ll grow up seeing Down syndrome as something bad enough to kill for. 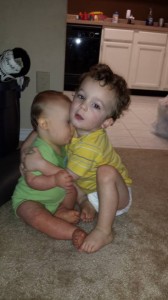 You know what probably will burden their children forever? The knowledge that their parents chose to kill their brother because he didn’t meet their standards of perfection. Heaven forbid one of their acceptable children ever falls ill and becomes disabled; what will they do then?

How can a child feel secure in their parents’ love for them knowing that those same parents killed a child they professed to love because that child was a little bit different, would have required slightly more work? Every child has their own talents and difficulties. Everyone is different, and every life is worth living. They’ve now had another baby, another boy, and before she “allowed herself to love him.” she said she had to scrutinize him for any signs of Down syndrome. This doesn’t exactly sound like a mother bestowing unconditional love upon her children; on the contrary, her love sounds very much conditional.

If she only could have opened her mind and her heart, even just a little, she may have been able to discover that people with Down syndrome deserve life just as much as the rest of us do. They are not burdens, but have inherent worth and dignity as human beings. She will spend the rest of her life with a hole in her heart and a child buried in a graveyard, when she could instead have had a full heart and a beautiful bond between siblings that is irreplaceable. Her baby may have had Down syndrome, but that doesn’t mean that the kind and loving thing to do was kill him.