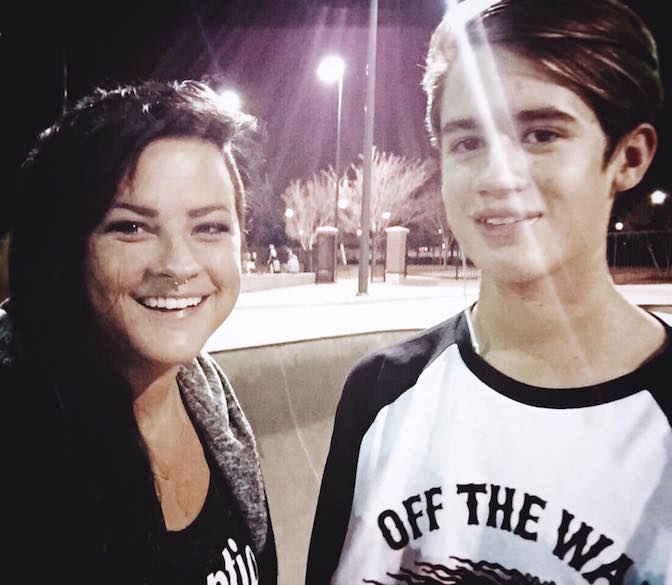 You have nine months for all that, but then it gets good. Still difficult, don’t get me wrong, but so so good…

My “crisis pregnancy” turned 15 today. He’s just a year shy of the age I was when I got pregnant with him (a thought that terrifies me, trust). However, he’s anything but a mistake.

He’s the other half to all my inside jokes. He’s the best person I’ve ever known. He’s the one who binge watches Doctor Who with me and teaches me about robots and video games. He’s the reason I started New Wave Feminists. He’s the owner of a pure heart, swiper of my favorite CDs, and contributor of copious amounts of laundry. He’s the kid who still has me hanging around skateparks a decade and a half later. He’s often my (much needed) filter, because he’s a stereotypical naturally mature firstborn, and the last one to ever let me down. He’s the kid that I didn’t really raise at all, but instead grew up alongside. He’s my heart and soul. The author and her son.

I didn’t know it at the time, but choosing life for him would give me a life that I wouldn’t trade for the world.

See, you don’t realize how temporary the “crisis” is when it’s consuming your every waking moment, but as soon as you get beyond that… Such beauty can be born from that which we never planned.

Fear is temporary, but the courage you gain facing it lasts forever. Panic subsides, but the strength you find in the midst of the crisis endures. Perhaps the most amazing thing though is how the love you feel for this new life, whether it was intended or not, suddenly turns a “mistake” into a miracle.

I didn’t save my son by “choosing life.” He saved me.

Editor’s Note: This was first published on the New Wave Feminists’ Facebook page on December 13, 2015, and is reprinted here with permission.