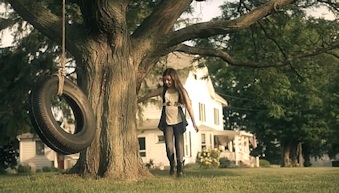 It’s not often that a Grammy Award-winning rock star inserts himself into the national abortion debate. But for John Elefante, former lead singer of Kansas, abortion is more than a political issue…it’s personal. Twenty years ago, Elefante’s adopted daughter Sami barely escaped the grip of abortion when her 13-year-old birth mother decided to cancel her abortion procedure at the last minute.

“There are two major facts I do know,” Elefante shares in a recent interview with CBN News. “ … [Sami] was almost aborted. Her mother was in the abortion clinic and called her mom from that place and told her she was pregnant.”

Now, two decades later, Elefante sings about this story in his new song “This Time.” Accompanied by a powerful music video created in partnership with the pro-life organization Online for Life, “This Time” shares how Sami’s birth mother chose to place her baby girl for adoption – a decision for which Elefante and his wife are overwhelmingly grateful. And the video’s views on YouTube have soared to over 350,000.

“This Time” has been labeled by some as the new “pro-life anthem,” and it has already been credited for saving at least three lives.

Just recently, a prison transportation officer wrote to Elefante and told how one of her prison inmates was contemplating an abortion. Having just watched “This Time” on YouTube, the officer shared the video with the pregnant inmate. And then, according to the officer, “She promised me right there that she was keeping the baby and she was going to share the video with other prisoners.”

In addition to telling his family’s story, Elefante is using “This Time” to promote Online for Life, a technology-powered, compassion-driven pro-life organization that helps rescue babies and families from abortion.

“When we first heard about John’s song and his daughter’s story, we felt a connection right away and realized we had a mutual passion for saving babies from abortion,” OFL’s co-founder and president Brian Fisher said during an interview with Charisma. “We are so grateful for his team’s heart and their desire to see this beautiful music and touching story used for the cause of life.”

Since its founding, Online for Life has cooperatively rescued over 1,300 babies from abortion – and that number is growing each day. But according to Fisher, that’s just the beginning. “We believe God has called us to a new phase of growth that could revolutionize the number of abortion-determined women we reach and ultimately, the number of babies we rescue.”

When asked about his bold initiative to expand Online for Life’s reach to those facing crisis pregnancies, Fisher quips, “We’re just trying to keep up with God.”

To view John Elefante’s video or to stay informed regarding what’s happening at Online for Life and throughout the entire pro-life movement, please visit ThisTimeforKeeps.com.