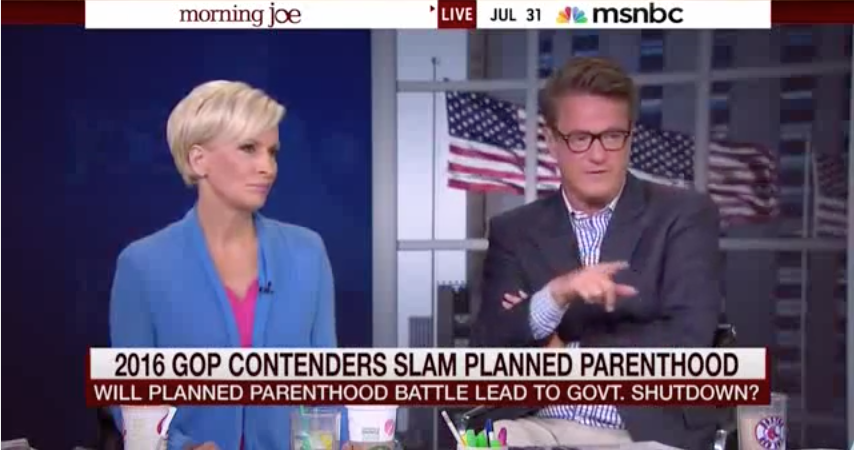 When the major news networks feel that the release of a beanie baby is a more pressing story than the release of multiple videos documenting Planned Parenthood’s illegal selling of baby body parts (containing footage of dismembered babies), the public would not be out of line to suspect media bias.

Now a well-known newscaster has come forward, admitting that the media is biased in favor of Planned Parenthood and the pro-choice position. MSNBC’s Joe Scarborough was recently quoted in a Washington Examiner article:

You know, I got to say of all the areas where I think there is media bias, I think the greatest area is on this issue [abortion] I think most reporters do the best job they can do and they try to be as fair as possible.

But when it come to the issue of abortion, there is the greatest built-in bias. And it is completely cultural bias, it is unintended.

Scarborough also weighed in on the Planned Parenthood case and the legal reaction to it:

[I]f the roles were reversed … there is a group on the right doing what Planned Parenthood has done on the Left and is described on the Left, there would be Justice Department — there would be indictments already going down.

Whether or not such bias is ‘unintended’ is open to debate. But it is interesting that an anchor from a national news station would admit that his colleagues are biased in favor of abortion. Pro-lifers have been saying this for years.

As recently as August 6, LifeNews Writer Katie Yoder wrote an article in which she examined the amount of time three of the top television news providers (CBS, NBC, and ABC) spent covering the Planned Parenthood scandal with how much time they spent covering the killing of Cecil, the African lion involved in a research project who was killed by a trophy hunter. The public reacted with outrage to the unjustified shooting of a beautiful wild animal.

According to Yoder, ABC, CBS, and NBC spent a total of one hour, 32 minutes and 56 seconds of airtime covering Cecil’s story.

From the beginning, the liberal media raced to defend Planned Parenthood. In the first 9 hours and 30 minutes of news shows broadcast after the story broke, ABC, NBC and CBS, spent only 39 seconds on the first video. It took more than 24 hours before all three covered the story. In the week after the first video, the networks gave a mere 9 minutes and 11 seconds to the story. In contrast, the networks devoted more than three times that to the Susan G. Komen controversy, when the charity temporarily decided to defund the abortion giant.

Perhaps Planned Parenthood’s large monetary contributions to top Democratic politicians has something to do with that.