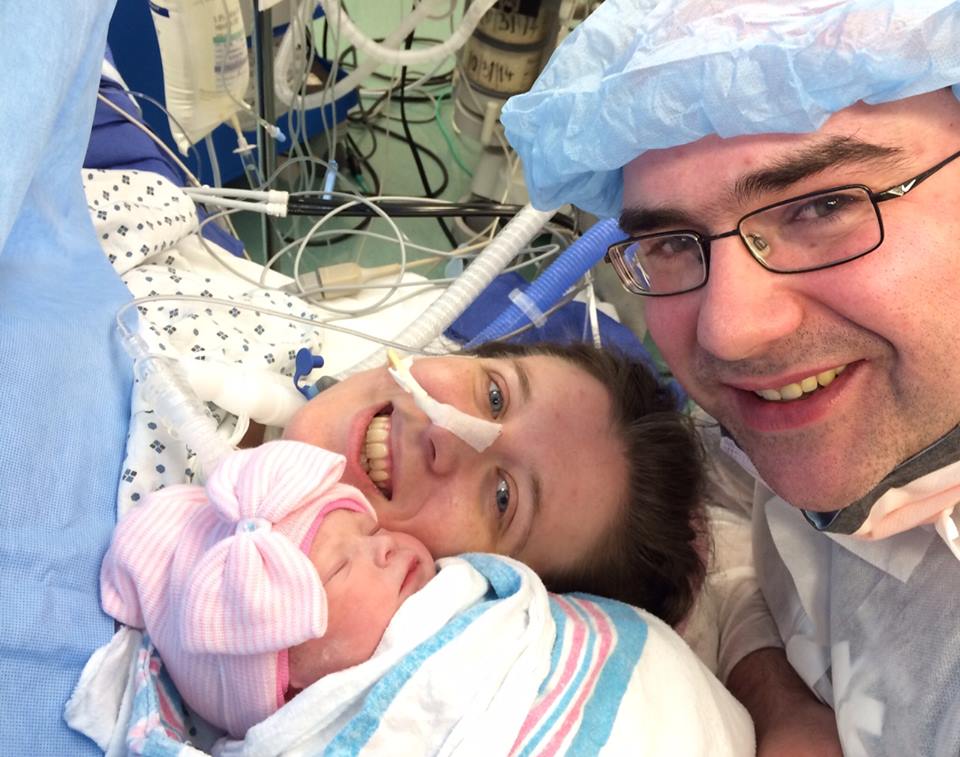 Just weeks after learning she was pregnant, Amanda Bernier was diagnosed with amyotrophic lateral sclerosis, ALS, also known as Lou Gehrig’s disease. She and her husband Chris were celebrating a new life while dealing with a tragic diagnosis.

Knowing that she might not live long after her daughter was born, Bernier was determined to give birth to her child. And on November 4, 2014, she accomplished that, giving birth to healthy baby girl named Arabella Grace.

Bernier’s health has continued to decline and she has lost her ability to move and breathe on her own. But despite her deteriorating health, she fought to overcome physical struggles to breastfeed her daughter, who is nicknamed Peanut. Nurses and family members had to hold the baby to her breasts to feed since Bernier could not move and two people had to help her pump breastmilk. “My neurologist did not know how my body would handle a major surgery [C-section] or if I would live long enough to see her,” Bernier wrote in a Facebook post. “As soon as I was rolled to my room, Peanut was placed on my chest. I was blessed that she immediately knew what to do. The nurses that I had gotten to befriend over the past quarter of a year knew how important it was to me to breastfeed. They were determined to help me give that gift to her.”

After reaching her goals of giving birth to her daughter and being able to breastfeed, Bernier dreamed of living to see Arabella turn one. They celebrated with three parties and Bernier was able to give Arabella her first birthday card, something she thought she might not get the chance to do. Since her diagnosis, Bernier has created scrapbooks, and journals, and has prepared birthday gifts, Christmas gifts, birthday cards, and special notes for her daughter’s graduation and wedding. Enough pieces of her to last two decades.

“As difficult as it is to know that I am dying sooner than I would have liked, and that my daughter won’t remember me, I came to terms with it after my diagnosis,” she said. “There is no point for me to be upset every day. … I enjoy each day, as it is a gift to be alive. I have tried to do as many things as I could think of to help Arabella know who I am.”

Her letters to her daughter include thanking Arabella for “everything she has done for me – the joy she has brought to my life, and the way she has given me strength to wake up each day.” In addition, she writes letters of encouragement for Arabella to chase her dreams, to be a kind person, and to see the good in everything.

Each night Bernier and Arabella spend time cuddling before Arabella goes to bed. She wants her daughter to always be able to remember how much her mother loves her.

Bernier’s next goal is to live to see a cure for ALS.