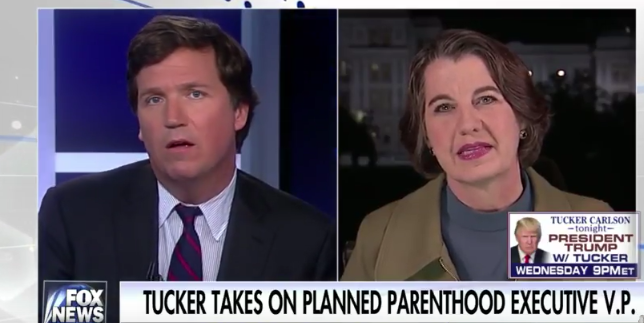 By now you’ve probably gotten a chance to see Planned Parenthood executive vice president Dawn Laguens’ grotesque performance on Fox News, in which she repeatedly and clumsily refused to answer host Tucker Carlson’s challenges to state just how alive or human she thinks preborn babies really are. To any objective viewer, it was the ultimate demonstration of the abortion crowd’s cult-like mentality, a clear admission that, in its infinite cruelty, Planned Parenthood simply doesn’t care what its victims are.

Of course, that’s not how Kevin Drum at Mother Jones saw it. In a post inaptly titled “Sure, Let’s Be Honest About Abortion,” Drum pushes back against pro-life reactions to the interview, but in doing so only demonstrates how widespread Laguens’ detachment from reality truly is.

I’m not on TV and nobody cares what I think, so I can say what Laguens wouldn’t: a fetus is not a living human in any sensible way. I can’t prove this. It’s like asking whether a beanbag is a chair. It’s an opinion, not a fact.

Really! Not in “any sensible way!” Unless you count, y’know, science.

Do the terms biology or embryology ring any bells, Kevin? It is absolutely a fact that fetuses are living humans, every bit as much as anyone at Mother Jones (arguably more so, if you count the fact that no fetus has ever tried to deny a MJ writer’s humanity). Indeed, so settled are the criteria for defining something as alive, as human, and as an organism that many abortionists admit it, as do many pro-abortion thinkers and activists.

There are many ugly things that can be said about the wing of abortionism that admits what they’re destroying yet rationalizes it, but you have to give them this much credit—unlike Mr. Drum’s gibberish, “pretend it’s all subjective” wing, at least they’re honest.

Oh, and I don’t think it will come as a great shock to learn that Drum has a habit of applying the “denier” label to those who disagree with him on the far-less-settled science of climate change, but apparently fails to see the irony of denying a scientific question that really does have a clear and settled consensus. Drum continues:

As for why Laguens wouldn’t answer, it’s not because she’s dishonest. Certainly no more so than pro-lifers who refuse to say whether women who get abortions should be thrown in jail for murder […] neither side wants to make scary-sounding statements that might drive moderates away from their side.

Good grief. First, most pro-lifers virtually never refuse to answer the jail question, and certainly no pro-lifer with a level of prominence comparable to a top Planned Parenthood official; we’ve been answering “no” for years (boy, it’s weird that Drum missed so many of those answers when he was blogging about Donald Trump’s comments on the subject last year…).

Second, he’s admitting that Laguens intentionally avoided answering the question because she didn’t want to “make scary-sounding statements”…which sounds an awful lot like dishonesty to me. But apparently in a world where the field of biology doesn’t exist, there are also honest ways to hide one’s true position on key aspects of an issue one is lobbying for. Wow, who knew? He goes on:

In any case, it’s not as if this is a bewildering mystery. “Life,” in anything other than a technical biological sense, is a matter of human judgment.

Wait, I thought there wasn’t “any sensible way” fetuses qualified as living humans. Now there is? Then why doesn’t the “technical biological sense” matter? Why isn’t it a sufficient standard against which to measure Laguens’ non-answers? Then Drum goes off the deep end:

We decide when it starts and when it ends. Both of these are gray areas, but they’re gray areas where we set up semi-arbitrary rules: 20 weeks or viability or third trimester or EEG flatline or lack of retinal response or something similar. What other choice do we have? If you’re going to have the government involved, you have to create a reasonably bright-line rule for people to follow.

Nonsense—the brightest line anyone could want, conception, is right there, and there’s nothing gray or arbitrary about it. The real reason abortion defenders don’t like it is simply because it means we don’t decide when life starts—observing objective reality and taking it as the starting point for our ethics is much more demanding than deciding what we want first, then shaping or ignoring facts to justify it.

I do, however, appreciate the admission that later trimesters and viability are arbitrary criteria. The more we understand there’s no mid-gestation magic that suddenly turns dead cells into real boys and girls, the closer we’ll be to ending this barbarism.

Drum ends by resurrecting the “save the embryo or the infant?” statement to show that nobody, not even pro-lifers, “genuinely feel[s] that a fertilized egg is a human being.” (Side note: “fertilized egg” is a bit of a misnomer for a new single-celled organism that is no longer an egg cell or a sperm cell after fertilization.) He adds nothing to this line of argument that hasn’t been dealt with before, so rather than rehashing it I’ll refer readers to our comprehensive takedown of this fallacy.

Kevin Drum did perform a service here, though: he demonstrated that it really wouldn’t have made any difference how Dawn Laguens handled the interview—there’s nothing of real value to say on abortion’s behalf.