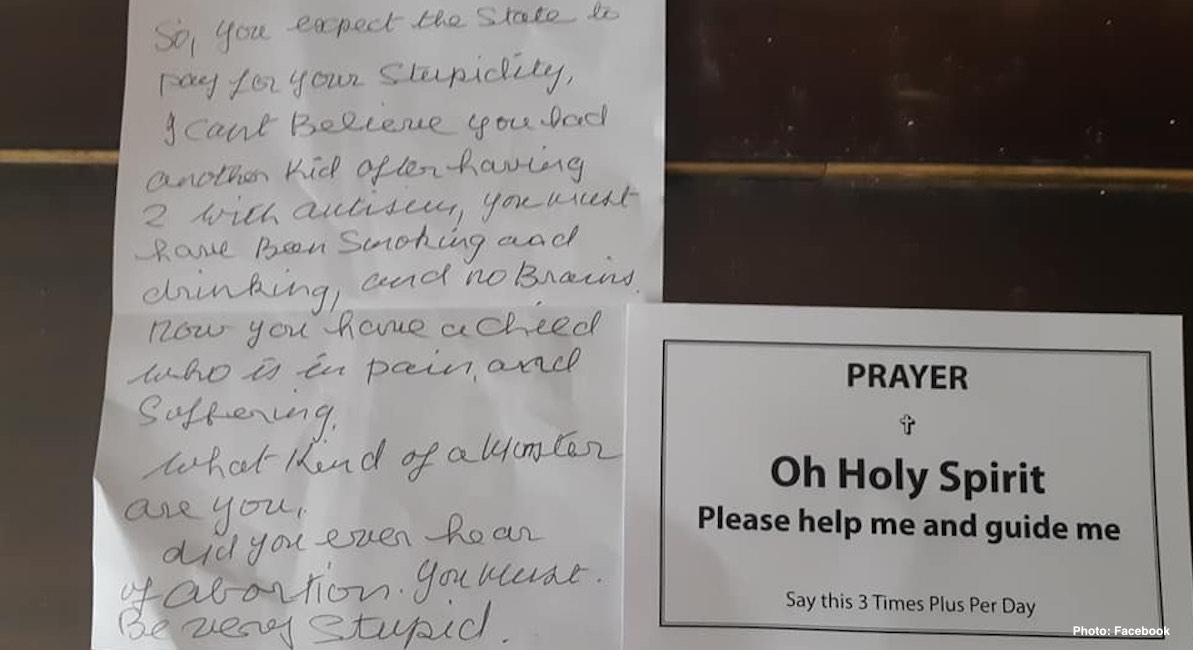 A British mother of four children, two of whom are autistic, reported this month that she received hate mail telling her she should have aborted her disabled children. The letter read in part, “What kind of monster are you, and did you ever hear of abortion. You must be very stupid.” Ironically, included with the letter was a printed religious card which read, “Prayer. Oh Holy Spirit Please help me and guide me. Say this 3 times plus per day.” 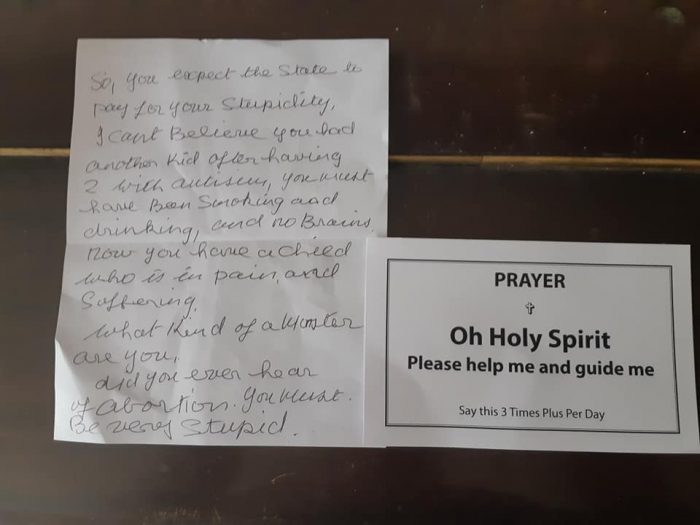 The letter was stuck in the door of Kenny’s home. She is shocked and saddened by the letter and the ableism and hatred behind it. She said:

Initially, I was kind of shocked and my stomach just dropped because you don’t expect that kind of stuff to come through your door.

I do a lot of campaigning online and I’ve had a few nasty things said to me online, but I never expected a letter to arrive through the door.

The letter writer also wrote, “So, you expect the state to pay for your stupidity,” referring to the fact that taxpayer funds are frequently directed to help care for children and adults with disabilities. People who are too disabled to work often face tremendous hatred and stigma and are sometimes harassed for collecting government assistance. In this case, the letter writer blames the mother for giving birth to children she or he considers burdens on society.

This is the same mentality that Adolf Hitler had when he called disabled people “useless eaters” and claimed that they were burdens on the state. The Nazis killed thousands of mentally and physically disabled people when they came to power, by gas and lethal injection, before building concentration camps for Jews and other “undesirables.” Planned Parenthood founder Margaret Sanger also had great disdain for those with disabilities, writing that birth control would aid in “weeding out the unfit, of preventing the birth of defectives or of those who will become defectives.”

Kenny said of the letter writer:

They don’t know me, they don’t know the situation, they’ve got a snapshot from an article that I did about returning back to schools – and they’ve decided that automatically they have this right to impose this completely misinformed viewpoint on myself and my family when the reality is extremely different.