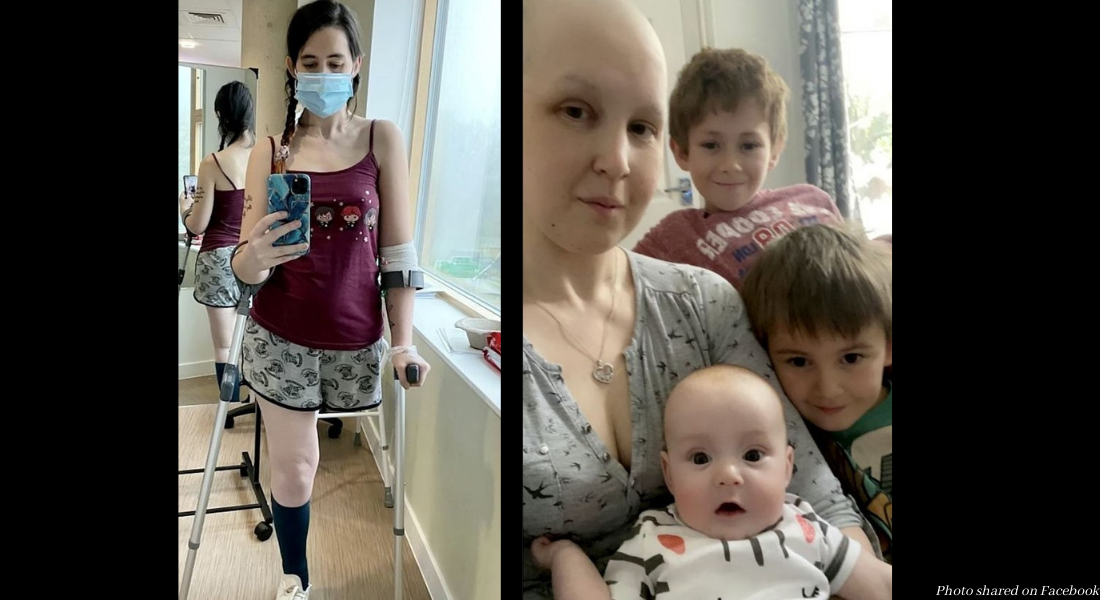 Kathleen Osborne has been fighting cancer since she was a little girl. But at 28, when she went in for an MRI of her leg, she found out she was pregnant — and she made the choice to save her preborn child.

In 2005, at 11 years old, Osborne was diagnosed with osteosarcoma. She underwent chemotherapy and had two metal rods inserted into her leg, and thought the rest of her life would be uneventful. She welcomed two little boys, only for cancer to return in 2016. “About three or four months after I had my second son [Leo], I had pain all down my side and I couldn’t move, I was bent over in pain,” she told the Daily Mail. “I had a scan after the doctors found fluid on my lungs and that’s where they saw this big mass on my lung which they couldn’t biopsy as it was touching vital organs. It turned out the cancer was back, and within a week, I was back in hospital for chemo. Childhood cancer usually comes back within two or three years, but mine came back after 11. It was really rare, it’s not often they see that so they had to act quickly.”

The chemotherapy worked again, and in 2017, she was cleared by her oncology team. But three years later, she discovered a painful lump on her leg that made it difficult to walk. She underwent an MRI, which told doctors that Osborne had cancer once again — but they also found a mass in her pelvic region. After giving her a pregnancy test, Osborne also found out she was expecting another baby.

Doctors then told her that she could choose to have an abortion and begin chemotherapy right away, and possibly lose her leg — or have her leg amputated now, and try to keep her baby. “They gave me a week to make the decision and told me the sooner I had the surgery, the better,” she said. “My friend stayed with me that evening and I just cried a lot. I was really worried, I did a lot of crying, and my friend did a lot of crying with me. I thought I’d rather choose to keep my baby and lose my leg. I was probably going to lose my leg anyway so I might as well lose it now and keep my baby. I told the doctors the very next day, I said book it in and just do it. There was no point in me having too long to think about it because it would scare me even more.”

Just 10 days later, her leg was amputated. Though Osborne had made the decision quickly, it was still difficult for her to accept what had happened.

“It was really hard. Towards the end of the eight days, I did glance down but it was really weird looking at the blanket on top of me,” she said. “I could see one heap where my leg was and then nothing next to it. I really struggled to look down at it, I just couldn’t bring myself to do it. I had to tell my boys before the surgery that my leg was being amputated, but I did it in a fun way to keep them from being scared or worried. They love Transformers so I said I had something bad in my leg and that the doctors needed to take it away but that Transformers were going to make me a new leg. They were like ‘really?! That’s really cool!’ and then they loved it! It was the only way I could think of how to tell them so I’ve just kept that story going.”

Osborne’s cancer was gone after the amputation, and she thought she had been able to leave it behind her as she adjusted to life in a wheelchair. But then she had to deliver her baby eight weeks early after doctors realized she had lung cancer once again.

“They only gave me two days to prepare for giving birth to her – I thought I had eight weeks and then suddenly I only had two days which was scary!” Osborne said. “I was scared I was going to lose her because I was having her so early. I was worrying about how well she’d be and how big she’d be. Those two days were awful. All these things were running through my head about her and then about me being diagnosed with cancer for the fourth time as well.”

Her daughter, Aida-May, is healthy — but Osborne is not. Doctors have said her final bout with cancer is inoperable and incurable, and that she is now terminal. She’s still undergoing therapy, but with the goal of making memories with her children before she dies.

“We’ve got a little holiday booked for next month and I’ve made a Crowdfunding page to try and raise money so I can make as many memories with the kids as possible,” she said. “That’s my only focus now – making memories with my children. I don’t know how long I have left, it could be years, it could be just months. I just want to do as many things as they want to do. They really want to go to Disneyland which we can’t do yet due to Covid-19 but hopefully we can in the future. My focus is just doing as much with my kids as possible. It’s just them, I don’t really care about my dreams any more. As long as they have memories with me and they have as much fun with me as possible over however long we’ve got, then I’m happy. I can go then, as long as they’re happy.”

She also said she doesn’t regret amputating her leg, because it gave her Aida-May. “I wouldn’t have her if I didn’t do it so it’s all been worth it,” she said. “I’d always wanted a little girl after having my two boys first and now she’s here so I’m happy I did it.”