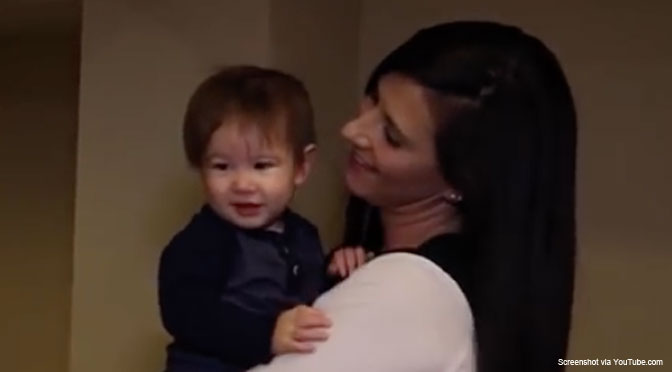 (Pregnancy Help News) Not many people can say they celebrated their first birthday on the floor of the U.S. House of Representatives.

Then again, there’s only one Milo.

Decked out in a hand-crafted birthday hat made by his mother, Jessica, Milo and his older brother, Oliver, were privy to a guided tour of the House floor Jan. 21 as an unexpected perk of Heartbeat International’s Babies Go to Congress.

Though Milo and 2-year-old Oliver were much more impressed by a book of airplanes and space shuttles they found in one congressman’s office than they were to sit where President Obama delivered his final State of the Union address just days before, the visit marked a significant milestone for their mom.

When she found out she was pregnant with Milo, Jessica felt she had betrayed her firstborn and deprived him of the life he deserved.

After a rocky beginning, life was good for Jessica and Oliver. They lived with her grandmother on a hill where most of her family also owned homes. Oliver’s dad, who was verbally abusive to Jessica during her pregnancy, had finally come around and now seemed committed to co-parenting his little boy.

Now, Jessica found herself pregnant again. This time, Oliver and Milo’s father made it clear he wasn’t going to stay around.

“I just felt like I had ruined Oliver’s life,” Jessica said. “He just had this incredible life, and I just felt like my choices were just going to rip everything away from him. So, with Milo, I was considering abortion. I just felt like it wasn’t fair for Oliver to have another child.”

Though the idea of abortion turned out to be more of a passing thought in Jessica’s mind, she still needed a friend to help her through her pregnancy. That’s when she turned, a second time, to Fallbrook Pregnancy Resource Center, where she saw Milo and heard his heartbeat for the first time over ultrasound.

Jessica had originally gone to the center for help when she was first pregnant with Oliver. Although she and Oliver’s father made several visits together, as he became verbally abusive, she began to make many trips herself.

It was during those 1-on-1 visits Jessica told her peer counselor, Claire, what was going on between she and her boyfriend.

“When you feel so low about yourself, having someone love you even though you feel like you’re a terrible person—it was really just incredible,” Jessica said through tears.

Claire and the rest of the staff helped Jessica through both pregnancies, and helped her establish herself in the process. Jessica became a state-certified notary and now nannies full-time in what she calls a dream position, where she and her boys are together all day while she works.

As she watches her sons grow together, Jessica can’t imagine her life without Milo.

“He’s just so incredible,” Jessica says of Milo. “And what I thought was just going to be the biggest punishment to my son ended up being the best gift I could give him. He’s an incredible big brother, and Milo is just so sweet and full of life.

“It’s been a really incredible journey. With Claire’s encouragement, I was able to do things I wouldn’t have done before.”

Jessica was one of six moms who went to Capitol Hill to tell their story of how pregnancy help has rescued their families and empowered them to make healthy decisions Jan. 21 as part of Heartbeat International’s Babies Go to Congress.

You can watch Jessica and the rest of the 2016 Babies Go to Congress moms share their stories here. Click here for pictures from the day. If you are pregnant, and in need of help, you can contact OptionLine.org (1-800-712-HELP or Text HELPLINE to 313131).