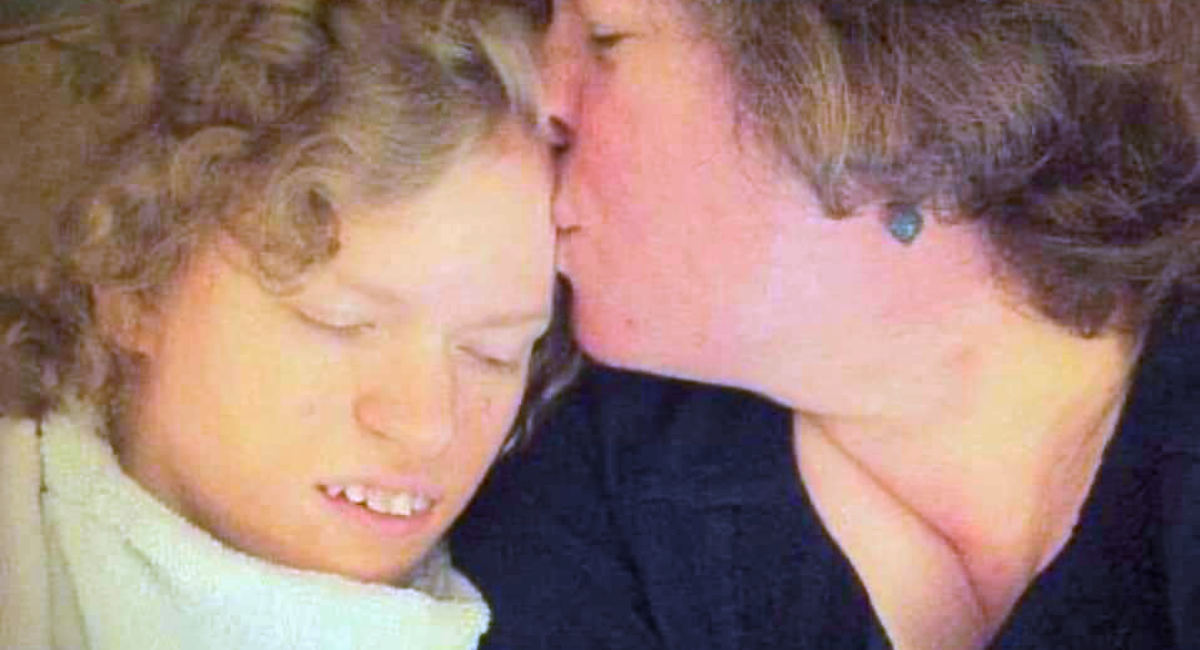 Mary Lenaburg‘s life was turned upside down at her daughter Courtney’s baptism in 1992. Lenaburg, the mother of four children — “two we lost to miscarriage, and two we got to hold” — said their son Jonathan (now 31) was three years old when Courtney was born. “So we started life with a boy and a girl, happy as a clam, walking along.”

But then five-week-old Courtney responded to the cold baptismal water in an unexpected way. Lenaburg told Live Action News that her daughter “arched her back and shook, and kind of violently shook” in her arms, so much so that “I almost lost my grip on her.”

Though she first thought that Courtney was simply reacting to the cold, Lenaburg soon realized that something was very wrong. Though Courtney relaxed seconds later, the violent jerks and shaking soon returned. While Lenaburg nursed Courtney in an attempt to calm and soothe her, Courtney instead clamped down on her breast and began to turn blue, manifesting “what we would come to know as a grand-mal seizure.” From there, she was rushed to the nearest emergency room.

During her intensive care unit stay, “Courtney was diagnosed over the course of the next week with a seizure disorder, origin unknown,” Lenaburg told Live Action News. “At that point, it was just seizures. She was developing a little slower, but she was developing like all the other kids.” The Lenaburgs were sent home from the hospital to continue life as ‘normally’ as they could despite the “12-35 grand mal seizures a day.”

Tragically, more heartache was in store. “When she was seven months old, we found a medication that we thought would stop the seizures… Unfortunately for us, Courtney had a brainstem allergic reaction to the medication,” Lenaburg said. “Her brainstem swelled, her body began to shut down, she lost her sight, and she lost every developmental stage that she had gained up to that point. And for the remainder of her life she never surpassed nine months’ development.”

READ: Mom says children with special needs should be treated like people, not puzzles

Courtney was transferred from the Bethesda Naval Hospital in Maryland to Johns Hopkins University. Ultimately, though, all the intensive testing and interventions in hopes of finding answers and to improve Courtney’s medical outcomes proved to be futile. Worse, “Every anomaly you could have, this kid had,” Lenaburg said. “If they said there was a 1.5% chance of something happening, you could guarantee that it would happen [to Courtney]. She was like a Ferrari. If one spark plug was off, the whole darn thing was down until you could figure it out.” 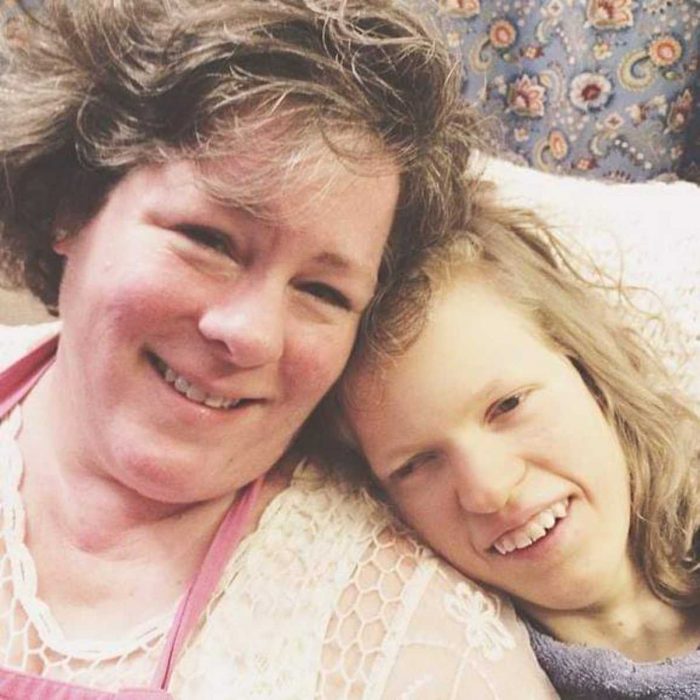 Lenaburg told Live Action News, “We left Johns Hopkins with three things. First, we were told that 80% of all marriages that have a child with disabilities end in divorce, and so we had best get ourselves to a marriage counselor… They said that there was an increased rate in suicides for siblings of special needs kids, so our son who was four at the time should be put in therapy for that. And then the third thing we left with was a diagnosis that [Courtney] would never live on her own, she would probably not live past her first birthday, because they couldn’t control the seizures… and they just couldn’t figure it out.”

The traumatized parents were faced not only with the prospect of Courtney’s complex medical needs, but also the weight of the knowledge that her severest deficits resulted from the medication. “So we not only had the fact that she was disabled, but also that we felt responsibility for that disability.”

“What happened over the course of the next seven years was, we tried to fix everything,” said Lenaburg, describing that dark time. “We were pretty much a complete disaster, a walking disaster, and the interesting part was… nobody else knew…. It was just between us. Because when we left our house, I didn’t want the burden of what we were experiencing to be given to anybody else. It wasn’t their burden to be carrying, it was mine. And that was a mistake, because I wasn’t mature enough to be vulnerable. And I learned that over time. But nobody knew.”

Then, the family went on pilgrimage in 2000 to Lourdes, France, a Catholic Marian apparition site associated with many testimonials of miraculous medical healings.

“When we went… we had this beautiful profound experience with our daughter — one that healed our hearts but did not heal our child,” said Lenaburg. “We came to understand through that experience… that Courtney was not going to be healed here. We knew that God is a healer, a miracle worker, a way-maker… but we knew that in His plan, it wasn’t that she would be healed here. And so we accepted that.”

“That pilgrimage really changed everything for us,” Lenaburg added. “It revealed to us that our daughter had a purpose and a mission. This is the gift of a disabled child. They are us, turned inside out. You and I spend our entire lives trying to hide what’s going on on the inside… so we walk around and people think we’ve got our stuff together, and inside we’re broken and shattered. Courtney didn’t have that choice. The whole world knew she was ‘broken.’ They saw it. You couldn’t hide it. And therefore she was simply free to be herself.”

Lenaburg believes Courtney “had one job on this earth: to receive love from people and to give love to people. And that’s what she did so beautifully well… Her sole purpose was to show people the face of Christ, that there was nothing that they had to do to earn His love. Nothing. They just needed to receive it.”

Lenaburg went on, “Nobody that ever came into contact with her left without feeling joy, feeling hope, because one smile from this kid would light up the room… She simplified our life and showed us the gift of what a smile is, the gift of laughter, the gift of a hug.” 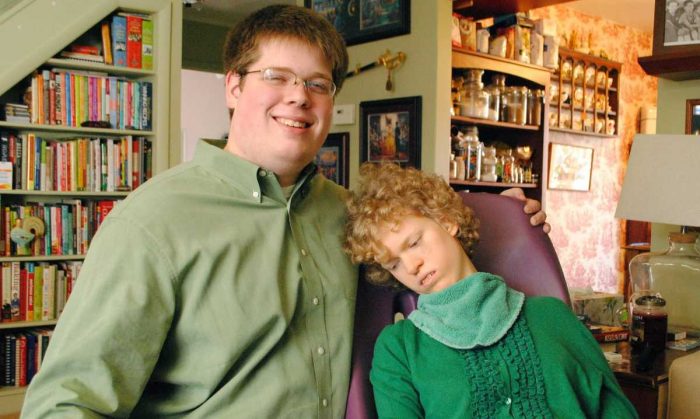 Lenaburg shared the colorful parts of Courtney’s personality as well. “She hated peas, she hated shoes. She was not a fan of bathtime or getting her hair washed, and she sounded like Chewbacca when she was mad.”

Lenaburg acknowledged that it was both “a joy to care for [Courtney], and extremely hard,” adding:

I had to grieve my daughter’s life the entire time she was alive. I had to grieve what it was that we were missing… and that’s very difficult and very isolating. You just feel like ‘what did I do wrong?’ And sometimes you felt like you were being punished.

But that’s not how God works. God doesn’t make mistakes, He made her to transform my life and my husband’s life and my son’s life. She transformed the community that she was born into, to show them the dignity of the human person.

After 22 years of blessing her family and countless others, Courtney dealt with several months of gradual, progressive decline and passed away peacefully in her mother’s arms on December 27th, 2014.

Now, Lenaburg is sharing the lessons Courtney taught her during their time together, through her speaking and writing and by taking an active role in the fight against physician-assisted suicide in her home state, which directly targets those with disabilities.