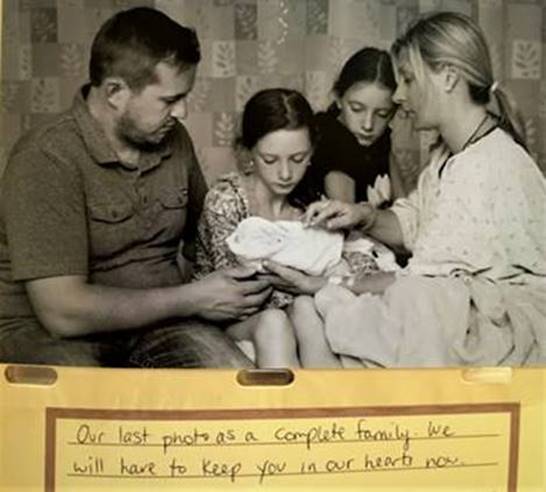 In 2016 I was blessed to carry a baby that was VERY much wanted, and who we had spent years trying to conceive. I was so excited; the nursery was practically done by the end of my first trimester. We decided to have an early blood test performed to find out the gender of our little one so that I could continue preparing everything before this amazing blessing came into our lives.

At 15 weeks, we found out that we were expecting a little girl; however, we also received the most earth-shattering news: that she was also likely to have Turner syndrome. I cried for two days straight. I can attest to the fact that my husband is the strongest man I know, as he held me as I “scream cried.”

After the initial shock of finding that my little one was not going to be “perfect” in every way, I researched everything I could get my hands on. I had scheduled appointments with my doctor at least twice a week. I searched the internet looking for any success stories that I could find. I found a few; we needed some kind of hope.

At 20 weeks, after an echocardiogram and an ultrasound of the baby, we found that she not only she had fetal hydrops and a cystic hygroma, but that she also had missing chambers of her heart, and if she was born alive, that she would need heart surgery immediately.

The hospital doctor that came in changed the game. He suggested that we terminate the pregnancy, as my baby’s chances were minimal. Terminate? Oh… that means abortion, right? We sat there as he explained how the “termination” was done, and he wrapped up his visit, saying, “Best of luck to you the next time; at least you know you can get pregnant.”

All our hope was crushed, but not lost. We leaned on the amazing doctors and nurses at our obstetrician’s office. They encouraged us to continue with the pregnancy, and they all loved our twice a week visits with baby Jolie. Yes, they called her by her name!

Another couple of weeks went by, and a new concern arose. There was a chance that I could develop “mirror syndrome,” that I could develop extreme pre-eclampsia, and be at risk for a heart attack. I was checked by the doctor every other day, and I had to monitor my blood pressure every day at home. We also knew that inducing labor instead of an abortion was an option if it came to a point of life and death for me. All I knew for certain was that God was making the choices, not me.

Taking Jolie’s life was never my decision to make. We embraced this little girl’s every single day, she got more belly rubs and prayers than you can imagine! We were told that Turner syndrome babies generally do not make it past the first trimester. But Jolie made it through further in my pregnancy than any doctor had predicted. This was even more of the fire that I needed; there is a reason Jolie made it so far. Maybe she was meant to be born alive and change lives? Maybe she was going to pass from this life and still change lives? Regardless, she changed my life, and the lives of my family, along with the lives of countless friends.

At 25 weeks, her heart gave up. I delivered Jolie peacefully, I held her, I cried for her, I loved her. We put her to rest with a funeral service, and buried her in the children’s section of the cemetery. We bring her flowers. As she looks down on us from Heaven, I read her the “Blueberry Girl” book, as I did with my first two girls.

During my pregnancy, I promise you she was very much alive. I felt her move and felt kicks. I could see her growing with every ultrasound. I held her body after she was delivered.

Human life deserves protection and dignity. So, in closing – New York and any other state that is proposing abortion up until delivery, you have no idea how wrong you are. What you have legislated is, purely and simply, murder. Jolie and I were your “medical reasons” for late term abortion, and your argument does not stand up.

This past September, I delivered a healthy baby boy at 8 pounds 4 ounces at just over 39 weeks. I cannot even fathom that New York law would allow the murder of a baby the same gestation age as our newborn son! How did this happen in our country? I pray for our nation, and I pray that this insanity comes to an end.