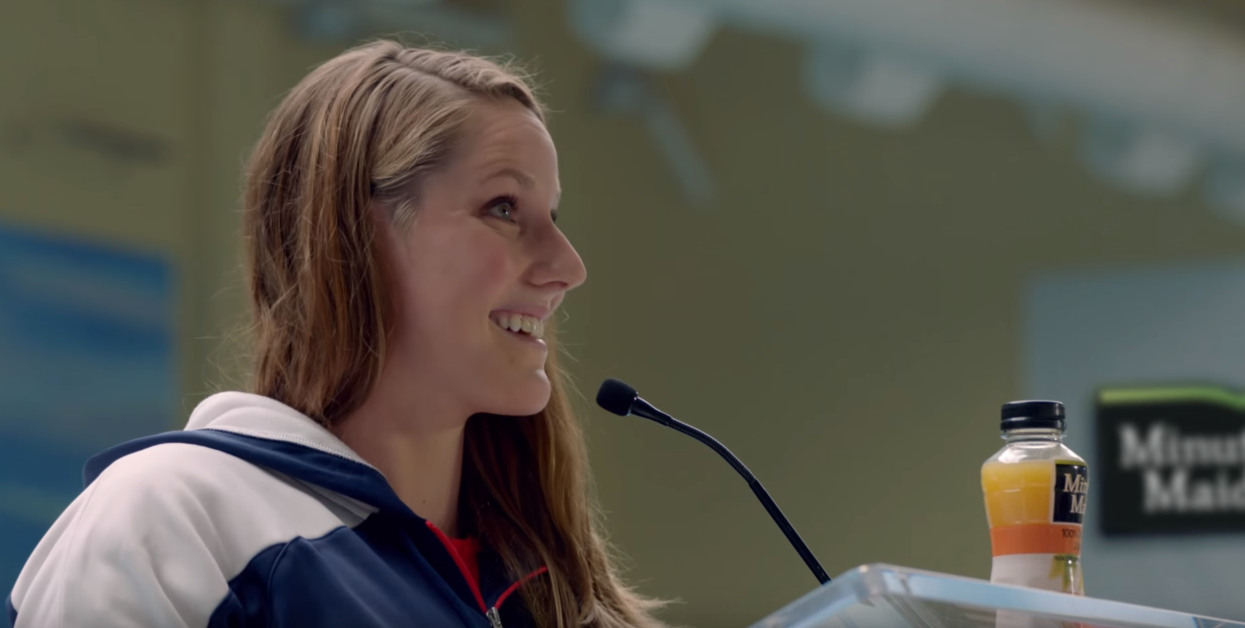 One of Minute Maid’s #doingood commercials had me in complete tears as I was watching the Olympics last week and the amazing Missy Franklin was the reason. I recorded it and kept rewinding and crying as if I was watching her medal.

My adopted five-year-old son asked me if I was crying because I liked it. I nodded yes and told him, “I love the way she loves her parents.” Braxton told me at least twice the next day that he was so glad I was his mommy. We hugged and I told him, “I’m so thankful you’re my son.” He understood what the commercial was about and little did I know how much more meaning came with this world-renown swimmer’s words.

I only saw the briefest cut of the commercial and not the full cut that was shown at other times. In the commercial spot, Missy Franklin is filmed giving a normal press conference in Denver, Colorado leading up to Rio. She surprised her parents by honoring them in front of the press with a hand written letter explaining how much they mean to the Olympic swimmer.

For the full gut-wrenching version, you can view it here:

Missy was choking back tears as she read, “I know I was a bit of a surprise when I showed up later in your lives. A new adventure for the two of you to take on together. You knew that above all else that you were my parents and that your most important job was helping me grow into the woman that I was capable of becoming.  You loved me. So one of the hardest things that I have to deal with is that I’m probably going to spend about half as much time with my parents as a lot of my friends are going to get with theirs.  But I know for a fact that I would not be the person I am today if you didn’t have me right when you did.”

When I finally got to see the full-length version of the commercial, I could only think of two things: Queen Esther and my own mother’s words on the timing of my life.

In the book of Esther, it says,  “And who knows but that you have come to your royal position for such a time as this?” It suggests divine timing of breakthrough and alignment of purpose through one person’s life that changes generations of people for good. I know Missy was saying that she wouldn’t have these certain opportunities, competitions, coaches, competitors and even some platforms should she be born to her parents at an earlier time. But I saw a Queen Esther moment as she spoke at that press conference telling generations– young and old– of the gift of life and the perfection of God’s timing in our lives. I smiled when she said, “I’m so incredibly blessed that Someone thought I was deserving of a love like yours.” Seems she was alluding to God- that He gave her life and He gave her the gift of her loving parents.

My mom told me a few times as about how hard it was to conceive my older sister and me. It took five years for my older sister and five more years for me. My baby sister was a beautiful, exciting surprise born only 22 months after me. Mom told me how often she thought about how different our lives would have been like had she conceived us when they (my parents) wanted to have children. I probably wouldn’t be married to my husband and I don’t know that my adopted child and the children we’ve fostered would have been in our home. Life is so sacred and when you think of it in measurements of time and how our tiny lives are born at an exact moment in the world to influence generations…it’s powerful and overwhelming.

There are articles being written of Olympian Missy Franklin going home without an individual medal and the disappointment she must feel. But I know one of her greatest accomplishments was never a medal. It was making a simple commercial that went into millions of homes explaining the beauty of life in the womb at unexpected times and how those surprises are really adventures to be had. She showed the world the gratitude of one unexpected child and the love her parents showed in return as they kept wiping their eyes. Had her parents not received their surprise, we would never know this world champion swimmer the way we do.

At the end of the commercial, her dad says to her as they finish a hug, “You’re full of surprises.” Missy laughs through tears and you can hear the whole world sigh. Life is so beautiful, especially the unexpected surprises that come with it.