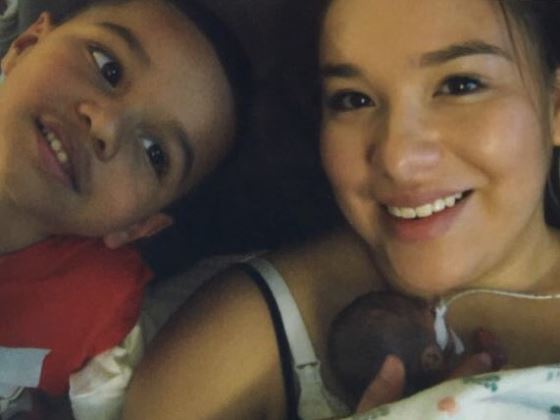 On September 29, 2016, baby Rayden was born at a hospital in Spokane, Washington. However, his scheduled due date was not until January of 2017. Rayden arrived over three months earlier than he should have. 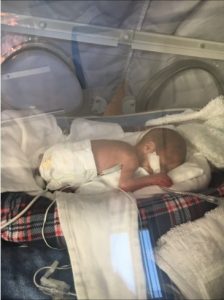 When baby Rayden was born at just 25 weeks, he weighed only 14 ounces and measured 10.5 inches. The micro-preemie was so small that his father’s wedding band fit around his leg. But the tiny tot is now over 5 weeks old and getting stronger and stronger as time progresses.

Marissa Mondragon, his 23-year-old mother, also has a six-year-old son. She had nothing but positive things to say about how baby Rayden is doing. He continues to shock people, surpassing expectations every day. Mondragon and her husband Robert expected to have more complications with Rayden, but say he’s doing great.

Mondragon’s pregnancy seemed to be going normally until she went in for a routine checkup to test for Down Syndrome at 20 weeks. As she told The Daily Sun, doctors at that visit noted a high level of spinal fluid and said that baby Rayden was small for his age. They determined he was not getting enough oxygen. The doctors gave Mondragon steroid shots to help Rayden’s lungs; however, a follow-up scan weeks later showed that Rayden was still not getting enough oxygen or nutrients. Doctors wanted to perform an emergency cesarean section.

Rayden was delivered by C-section at the closest specialist hospital the family could find. He was so tiny at birth that his footprints were smaller than his father’s thumbprints, and for the first few weeks, his parents were unable to hold him. They could only watch his progress through the glass of the incubator that provided him with a stabilizing and protective environment. 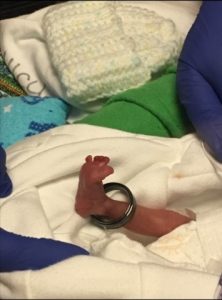 Rayden with his father’s wedding band. Photo via YouCaring.

Thankfully, his parents are now able to hold baby Rayden, and his condition is much more stabilized. He now weighs one pound, three ounces.

“It’s been a tough month and we’ve had a few scares,” Mondragon told The Daily Sun. “Luckily Rayden is getting stronger and stronger each day. Each day is a fight for him but to have him for a month is a miracle.”

Washington does not have any of the major types of abortion restrictions — such as waiting periods, mandated parental involvement or limitations on publicly funded abortions — often found in other states, which can be threatening to babies like Rayden.