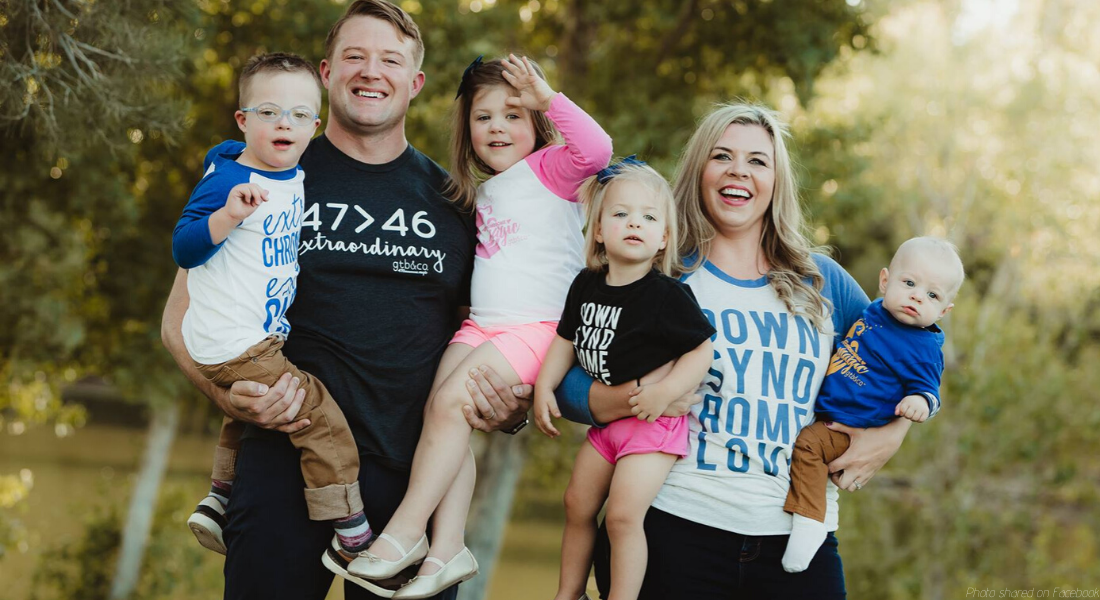 Kristie Magnuson said she had a persistent feeling that her son would have Down syndrome. The Air Force wife was pregnant with her first child and halfway through her pregnancy when she stumbled across a blog post about coming to accept the diagnosis. Though she had declined all testing, that feeling wouldn’t go away — and when she ended up being right, she said it only made her love her son more.

In an article she wrote for Love What Matters, Magnuson recounted her journey with her husband through her pregnancy, and eventually, receiving the Down syndrome diagnosis at birth. “My pregnancy was easy and uncomplicated. I felt great the whole time and was even able to continue to do modified CrossFit workouts,” she said. “My doctor asked if we wanted the routine blood work that happens later in the first trimester, but I remember declining it. I actually remember saying, ‘I’m only 25, I don’t think anything will happen.’ I also knew in my heart it would never change anything for us; we would always continue the pregnancy regardless of prenatal diagnosis.”

Yet after reading about another parent’s journey, she couldn’t shake the feeling that her son, Gabe, would have Down syndrome. And she was right. “Gabe was born at 11:30 on a Friday night,” she recalled. “I knew the second I saw him, he had Down syndrome. His precious little eyes told me. I kept asking the nurses and doctor if ‘he was okay’ as I was too afraid to say the words.” Several days later, the doctor came into her room and confirmed it. And while Magnuson, like many parents, cried at the news, she said it only made her love Gabe more.

“I burst out into tears, sobbing and rocking back and forth as I held Gabe, telling him over and over again how much I loved him,” she wrote. “In that moment, I felt my love and protection for Gabe intensify – it was a distinct feeling I will never forget. It just flooded over me as I cried and repeatedly told him, ‘I love you so much.’ … It was a strange mix of sadness, happiness, and joy for us. It didn’t make me love him any less. In fact, it had the opposite effect and made me love him exponentially more.”

Still, it took time to process the diagnosis, for both Magnuson and her husband, Alex. But the extra care shown to the family by their obstetrician made a huge difference for both of them. “I laid down on our couch, cried, and then fell asleep,” she said. “Alex went outside to do yard work and work out. He later told me he was digging out a weed with a shovel when my OB drove up to talk to him. Alex is not a crier, so physically moving was his way of getting out some feelings. I am so grateful for both our pediatrician and my OB’s caring way of delivering the official news and checking in on us.”

Magnuson grieved the loss of the baby she was expecting to have, like many parents adjusting to a Down syndrome diagnosis do — but today, six years later, her family loves their little boy with an extra chromosome.

“I feel so much thankfulness we are lucky enough to have Gabe. I am so grateful now that our baby has Down syndrome and we got the Gabe that we did rather than the Gabe I had imagined while I was pregnant,” she said. “He wouldn’t be the same Gabe we know and love today without that extra chromosome. I genuinely believe having a baby with Down syndrome is one of the greatest gifts you can be given in this world.”

After having Gabe, the Magnusons had three more children. “Our house is chaotic, loud, and messy and it’s absolutely perfect,” she said. “I am so thankful these four have each other. I honestly believe Gabe’s siblings will grow to be kinder, more patient, and compassionate people with Gabe in their lives. I can see those qualities developing already.”

And because of Gabe, Magnuson’s outlook on the world has shifted. “Having Gabe in our lives has changed my husband and me on a deep level,” she said. “Gabe makes us see the world differently. He’s six now, thriving in kindergarten, loves books, cars, hamburgers and donuts, much like any six-year-old. We are better people because of him and I am so thankful for all of his perfect 47 chromosomes.”