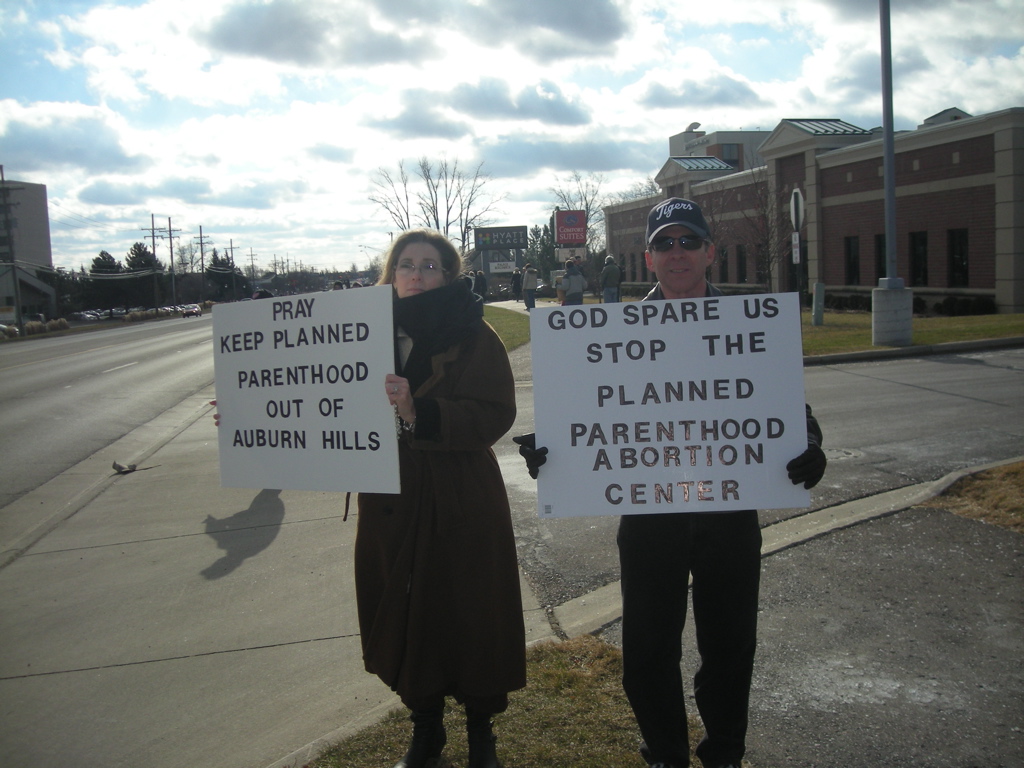 Gathering at 1625 N. Opdyke Road in Auburn Hills, Michigan, on March 8th, many pro-life groups united to show their determined opposition to a proposed Planned Parenthood clinic at the site. Among them: Citizens for a Pro-Life Society (CPLS), 40 Days for Life, Crusaders for Life, Realtors for Life, Central Oakland Right To Life (CORTL), and American Society for the Defense of Tradition, Family and Property (TFP).

Planned Parenthood purchased the property in November of 2010, but has yet to develop the empty building that is legally limited to retail, restaurant, or office use according to a deed restriction on the land.

In the ongoing courtroom battle that has ensued regarding enforcement of the deed restriction, Judge James Alexander ruled in favor of Planned Parenthood on January 10, 2012, even though the question of whether Planned Parenthood would be performing abortions (out-patient surgery) was never answered or even asked. The judge’s decision is being appealed.

Saying that their facility qualifies as an office, just a modified office – a medical office, Planned Parenthood attorney, Alan Greene, overlooked the most common descriptors for their facilities:  “clinic” or “abortion clinic”.  His argument:  in common parlance, “people say they are going to the doctor’s office or the dentist’s office.” Planned Parenthood, he said, is no different.

Protesters say they are not fooled. Dr. Monica Miller, director of CPLS says that if the building is turned into an abortion clinic, it will be a mega-clinic – the largest facility in the state of Michigan.

In the courtroom, on September 7, 2011, Attorney Greene described his client (Planned Parenthood) as a health services provider dispensing birth control, exams, and counsel, while completely omitting the subject of abortion.  Defense Attorney James Carey, on behalf of his client, then offered to settle…provided there would be no surgery (abortion) performed at the site. But Greene, on behalf of Planned Parenthood, refused.

Though Planned Parenthood could have settled the court battle seven months ago to begin dispensing their “counsel, birth control, and exams”, now, after having won the judge’s decision, Desiree Cooper of Planned Parenthood Media Relations says that the company is disappointed that the appeal will cause a delay of their services to the community. But while Cooper implies that the Auburn Hills area is in need of Planned Parenthood, local residents disagree.

Organized petitions, protests, and prayer vigils involving hundreds of residents, plus individuals and small groups appearing daily at the site, have been steady on Opdyke Road for over a year. Residents from Auburn Hills, Pontiac, Rochester Hills, Lake Orion and more, vowing to fight, continually assert that they do not want an abortion clinic in their neighborhood.

Sixteen months have gone by as the legal battle has continued over the 17,000 square foot building and still, Planned Parenthood officials maintain they are unsure about exactly what services they will even be providing. Such a claim is implausible and indicates incredibly poor planning on the part of Planned Parenthood considering the cost of the building and lost grant money from delays which now total nearly one million dollars.

The building remains empty while the appeal, the protests, and the prayers continue. Brenda Savage, of CORTL, says, ‘We will not stop working. The ruling in the 6th Circuit Court was a legal response to the case filed with regard to deed restriction violation…Had the case been filed with regard to use of the facility for abortions, rather than deed restriction violation, it might have been a decision about abortion…but not the case. The work falls to us to support a legally accurate interpretation of the law.’

Says Dr. Miller, ‘We need to pray hard about this!’