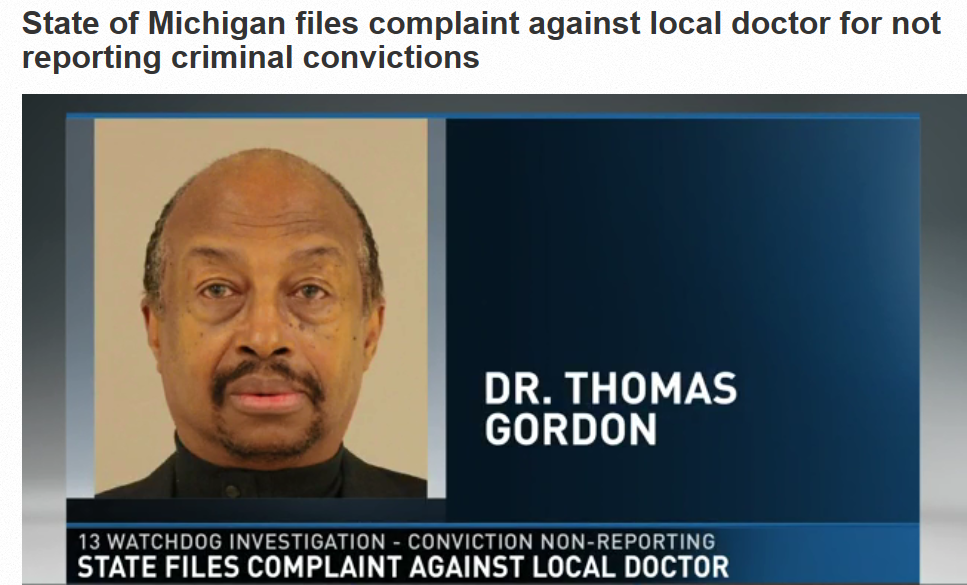 Michigan’s only independent abortionist has had his license to practice medicine suspended after failing to notify state officials of his extensive criminal history.

Thomas Gordon is the medical director at the Heritage Clinic in Grand Rapids, a National Abortion Federation-affiliated clinic. But as Live Action has uncovered, Gordon has a long history of violent criminal offenses, which seemingly does not bother NAF leadership.

When Michigan’s Department of Licensing and Regulatory Affairs (LARA) found that Gordon had not reported his criminal convictions to the proper officials, his license was suspended for 60 days. It’s a process that has been a year in the making, as the state’s medical licensing board filed a complaint against Gordon last May. Gordon’s license still might be reinstated, however, “if within six months from the effective date of this order the department has received satisfactory written evidence from the Health Professional Recovery Program verifying the respondent has undergone independent mental health and chemical dependency/substance abuse evaluations.”

The state’s public health code requires medical practitioners to report criminal convictions, and documents received by LARA showed that experts were concerned that Gordon’s criminal history could prevent him from practicing medicine in a “safe and competent manner.”

Gordon does have an extensive criminal history and, most disturbingly, much of his violent history is directed towards women — the same population he serves as an abortionist.

In 1992, Gordon was convicted of aggravated assault. Then, in 2010, Gordon’s wife Shelly filed a Personal Protection Order against him, alleging that he had been violent to her and threatened her with a gun, writing in the order, “Thomas has beat (me) several times in the past 3 years, he has even put his 45 mm pistol to my head when I was sleeping.” She also claimed in the order that he was unable to control his violent temper while on a trip to Jamaica, where a “layover and wrong transport made him snap.” She said that while she was sleeping in their hotel room, Gordon entered the room and “started hitting me in face, body said he doesn’t like me – hit me and damage [sic] my nose… “.

Then, a copy of a Kent County Sheriff Department Affidavit of Probable Cause from November of 2011 surfaced, and it further showed how violent and unstable Gordon is:

Suspect Thomas Gordon, did commit a felonious assault upon his wife, Shelly Gordon. The Gordons were involved in a verbal argument, in the finished basement of their residence. Thomas had a Kimber Combat Carry, semi auto pistol, chambered in .45 ACP, resting on the counter of a kitchenette area. The victim, Shelly Gordon, stated that she was going to go upstairs. Thomas stated “I’ll shoot you and anyone that f**ks with me.” He then ran over to the counter top, picked up the pistol, racked the slide and pointed it at Shelly. Shelly then grabbed hold of the pistol and Thomas’ hand. She stated “you are not going to shoot me,” as she tried to pry the pistol from his grasp. They continued the physical struggle and Thomas fell against the wall and then on to the floor. Shelly was able to grab the gun and run upstairs. She secreted the gun under a pillow, on the upstairs couch. Shelly then ran outside and hid, where she called 911. Thomas did submit to a breathalyzer, upon arrival at the jail. This yielded the BAC results of .21. It should be noted that the magazine for the pistol, although loaded with six rounds, was not in the grip of the pistol. Shelly stated that she believed the firearm was loaded.

When officers arrived, Gordon told them that he was a doctor who made over $1,000,000 a year and that he “drinks alcohol every day.”

Through his criminal history, along with statements he made to police officers, we can see that Gordon has a violent past, especially towards women, and that he also has substance abuse issues and has been caught practicing medicine while under the influence. Yet the National Abortion Federation still refers women to his abortion facility.

For at least six months, women will be safe from Thomas Gordon. Michigan officials should put the safety of the women they serve first, however, and revoke his license permanently.