Jeffrey Lewis, Muskegon’s director of public safety, said the closure was issued due to potential fire-, health- and building-code violations. …

Lewis said Muskegon police officers noticed the alleged violations when they responded to the facility on an unrelated service call. He said they entered the building and noticed some items that drew their attention, so they contacted the fire marshal.

The fire marshal and building inspector later investigated and issued the order revoking the clinic’s occupancy permit, he said. 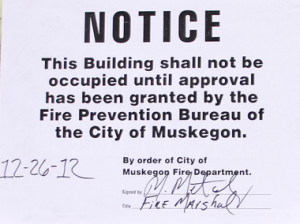 The notice posted on the door at Women’s Medical Services on December 26, 2012.

Dr. Alexander is currently blaming pro-life people for the violations at his abortion clinic. He claims that the building has been in “perfect condition” for 19 years and that a recent break-in he believes was committed by pro-lifers caused the violations. (Interestingly, one of the violations – the only one to be publicly named so far – is a leak in the roof.)

Police are still investigating the reported break-in but so far have discovered little evidence of a crime. Instead, the safety violations were readily apparent:

‘The responding officers found a broken-out rear window at the site and began a crime-scene search,’ police said in a statement. ‘There was no other apparent evidence of a larceny inside, but the officers noted several suspected building- and health-code violations and called for the assistance of the building inspectors and the fire marshal.’

Following the order to close his doors, Dr. Alexander has decided to ask the people of Muskegon whether or not he should reopen the clinic. Muskegon is a relatively small town with a population of around 38,000. So far, it seems apparent that the majority of the people involved in the discussion want the clinic to remain closed permanently. Right now, 1,993 people have voted in a Michigan news source’s poll, and a full 64.73% have responded that the clinic ought to stay closed.

Though some who support Women’s Medical Services claim that the clinic does indeed serve women, as its name implies, women are left to wonder how well they will truly be served by a clinic and a doctor who neglect safety violations, claiming that everything has always been in “perfect condition.”

Despite the violations, can women truly be served by a clinic that exists solely to help women abort their children? (The only services mentioned on the clinic’s website are counseling, emergency contraception, and abortion.) The counseling is clearly abortion-focused, and there’s no indication that the clinic helps women or girls to sort through other options like adoption or birth:

Counseling is available for those that need someone to ease the emotional stress of any abortion procedure. The counselors at Women’s Medical Services are trained to help people cope with any problems or questions they face when deciding on an abortion. The Counselors not only help before the procedure date, they help with the after effects that can be caused by having an abortion.

A clinic with the name “Women’s Medical Services” implies that women who want to give birth and either keep their babies or give them to a chosen family through adoption will also be served. After all, delivery and prenatal care are much-needed medical services for women. When such care is neglected at a clinic, it would be much more accurate to use the name “Women’s Abortion Services.” Then women would be aware of the type of counseling provided, and they could also be less surprised that a clinic which so easily kills innocent children might not be the safest place for women, either.