Yesterday, Neil Lyndon of the Daily Telegraph wrote a column, discussing whether men should have a say in abortion.

In the state assembly of Ohio…a bill has been tabled that would give fathers a final say in abortion. Their written consent would have to be obtained before an abortion could be effected. If a father refused consent, the abortion would not be allowed.

As far as I’ve found, this bill was tabled back in 2009. But, it’s a worthy discussion point. As Lyndon writes:

Any man who has tried to raise his voice has been denounced as an enemy of “a woman’s inalienable right to choose”.

This is a problem that plagues our society. As Danny Burton wrote for Live Action in “If you don’t have a uterus, zip it!” pro-life men are constantly – and rudely – told they have no say in abortion, including the abortions of their own children.

Decades ago, the U.S. Supreme Court struck down a law requiring a father’s consent before his child could be aborted. In a case I was personally involved with, a judge refused to stop an abortion that the husband and father objected to, on the basis of the Court’s ruling. While men must do what they can to protect their children (I discuss their options here), sometimes what they can do amounts to very little, thanks to contradictory laws.

Consider if it is truly just for the law to tell a man that, if his child is born, he will be responsible for child support (and possibly more) to help raise his child. This is the case even if he does not want his child. However – if he does want his child, i.e., he’s being a good dad – he has absolutely no say, the law says, on keeping his child alive. Even if the dad were to volunteer to pay all medical expenses involved in the pregnancy and birth, even if he were to take on sole responsibility for raising his child, none of this technically matters. 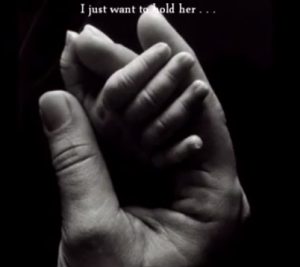 A photo used in “Lucy,” Skillet’s song for an aborted daughter

But back to Lyndon’s article. He writes:

When, in 1989, The Times of London published a column of mine in which I mourned the absence of two aborted children whom I might have fathered, the paper received so many letters in response that they had to be run on full half-pages on consecutive days. Nineteen out of 20 of those correspondents furiously told me that, as a man, I had no right to express any opinion on abortion and I could keep my feelings of loss to myself.

The woman’s right to choose is, obviously, not the only concern in a pregnancy – despite the fury with which feminists have been insisting on that position for 50 years.

On top of the highly contentious question of whether the foetus has philosophical, moral and legal rights, the inseminating man must clearly, undeniably have an active interest that ought to be established and recognised with legal rights. And then, too, the wider society that pays for the operation under a state health service should also have a say.

While Lyndon writes for the UK, Americans ought to perk up our ears as well. We fund our nation’s abortion giant – Planned Parenthood – to the tune of millions of our hard-earned taxpayer dollars. Man and woman alike, we ought to have a say in stopping abortion.

Laws should recognize a man’s right to stop the murder of his own child. And our elected representatives should also recognize our right as taxpayers to refuse to fund America’s abortion giant with one more red cent.