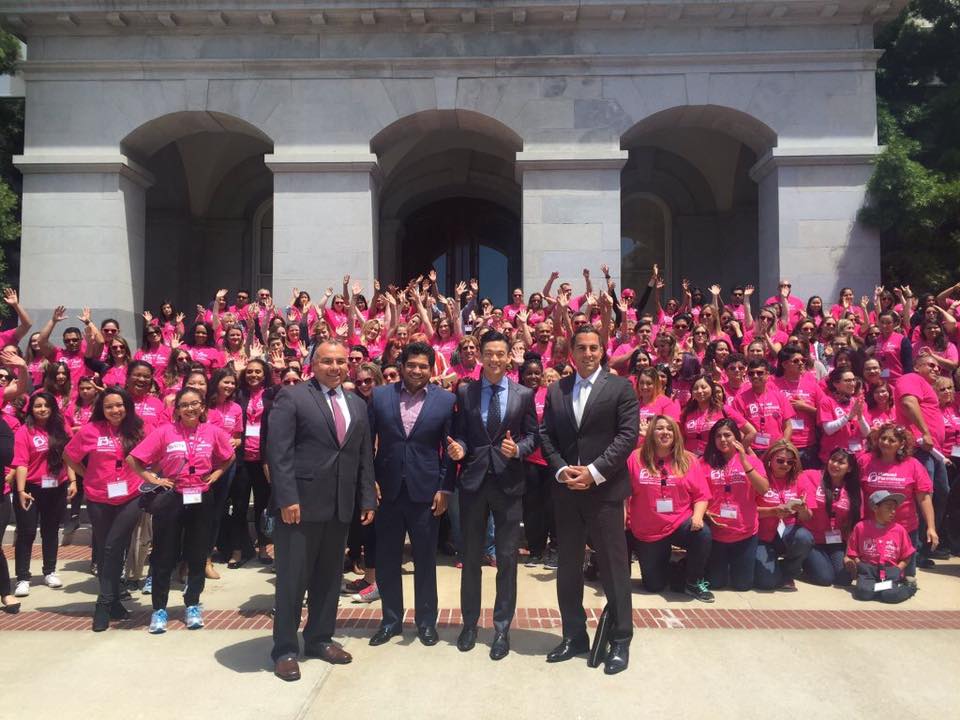 Assemblyman Jimmy Gomez (D-Los Angeles) is a relative newcomer to the California legislature, but he’s proving himself to be one of the  most dangerous politicians there. Elected in 2012, Gomez is the author of AB 1671. This bill is being decried – even by liberal media organizations and supporters of abortion – as blatantly unconstitutional.

AB 1671 would “make it a crime to publish confidential conversations with certain health care providers—most notably, anyone affiliated with an abortion clinic. This means anyone who posts a photo or video of an interaction with an abortion clinic employee or volunteer—including clinic escorts—could be prosecuted under the bill. AB 1671 provides for penalties of up to $10,000 per violation and one year in state prison.”

Media organizations are speaking out against this bill, not because they necessarily support pro-life undercover investigative journalists like David Daleiden or his Center for Medical Progress, but because they realize that such an unconstitutional law could easily be applied to them. It is already illegal in California to record a conversation without both parties’ consent (in most situations). But AB 1671 would extend the government’s reach, arguably allowing them to prosecute any citizen or journalist who publishes recorded content involving certain “health care providers” – whether or not they were the one to actually record the content.

Yet Gomez has chosen his ally in this battle, and it’s neither the common man nor the Constitution. Instead, Assemblyman Gomez – who represents northeastern Los Angeles and East Los Angeles – has selected Planned Parenthood as his BFF.

In 2015, Planned Parenthood Los Angeles (PPLA) gave Gomez its Champion of Choice Award. According to the Center for Medical Progress, PPLA was discovered partnering with Novogenix Laboratories, LLC, to deal with “fetal organ harvesting at their surgical abortion clinics.” In the video below, Novogenix’s Executive Director, Dr. Ben Van Handel, can be heard admitting that, sometimes, after the abortion is done, “the [baby’s] heart actually is still beating.” And yet, the baby’s organs and body parts are still promptly harvested.

Documents released by the New York Times include an email between a fetal body parts buyer and a harvester, who already had “a lot of frozen fetal tissue,” but was planning to go to a California Planned Parenthood for more fresh body parts, including a liver.

This organization – Planned Parenthood in California – is the one Gomez has chosen. They, too, have chosen him. In two elections (2014 and 2016) Gomez has received $13,500 from Planned Parenthood, even though he lives in a district where he hardly needs the support. In 2014, he received 83.6% of the vote. Prior to running for the CA legislature, Gomez worked as the Political Director of the United Nurses Association of California. This group is listed consistently as one of Gomez’s top campaign contributors, and it often joins Planned Parenthood in support of various legislation or ballot initiatives in the state. UNAC also recently hosted a Women’s Empowerment Forum where it invited a PP staff member to speak, demonstrating the companionable relationship between the two groups.

Gomez has made no secret of the purpose of some of his sponsored legislation: to benefit Planned Parenthood. One bill he sponsored in 2015, AB 1177 (which was signed into law by the governor), removed the legal requirement of a Hospital Transfer Agreement from community care clinics. Such transfer agreements (and the similar hospital admission privilege requirements in other states) protect patients and “serve as a safety net,” particularly in dangerous and time-sensitive emergencies. PP despises such agreements, even though they prevent abortionists from abandoning their patients. Since such a law benefits PP (while endangering women), Gomez calls the law, “Protects Patient Access to Planned Parenthood Services,” even though it applies to all community care clinics.

In 2013, Gomez sponsored what appears to be a good piece of legislation, AB 790. He claimed AB 790 would “assure that child abuse reports are made by every mandated reporter.”

This bill is critical in maintaining safety among all children. “There is a loophole in the law, which creates a situation where not every mandated reporter is required to report the abuse, suspected abuse or neglect of a child,” said Assemblymember Jimmy Gomez.”

It’s simply unfortunate that Gomez hasn’t realized how terrible his BFF, Planned Parenthood, is at reporting child abuse. Perhaps he would reconsider his vocal, absolutist support of the abortion chain if he watched this video:

Simply put, since Assemblyman Gomez enjoys focusing on and fixing apparent loopholes in the law, it would be far more helpful to women if he would find and fix the ‘loopholes’ that allow them to suffer at the hands and the silence of Planned Parenthood.