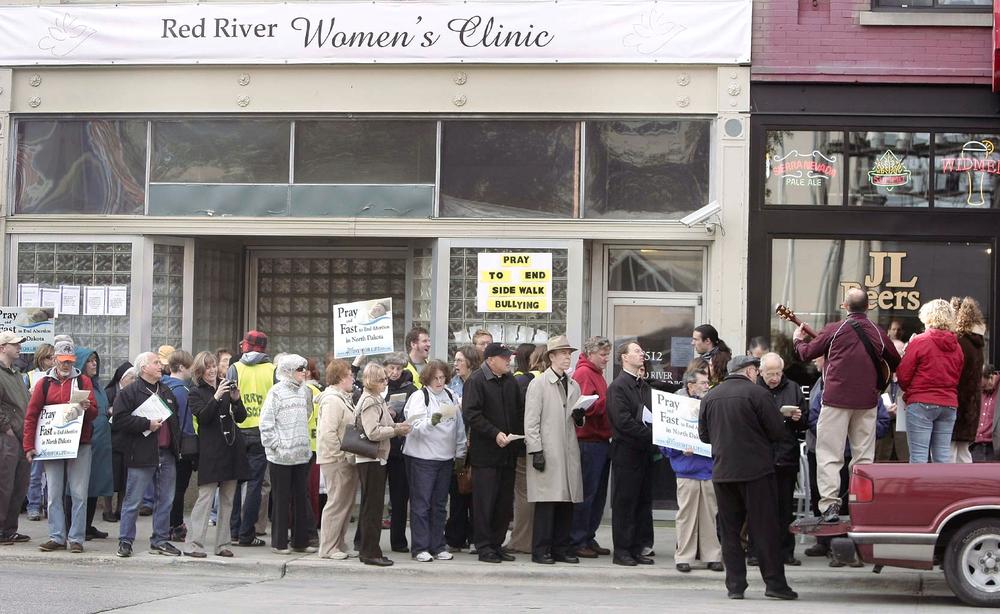 It may sound hyperbolic to claim the pro-abortion commentariat have sunk to a new low, but if this story doesn’t warrant it, nothing does.

Websites including Jezebel, Alan Colmes, Raw Story, Liberal America, and Addicting Info have seized upon the story of a pro-life protest against the Red River Women’s Clinic abortion mill in Fargo, North Dakota, and pro-abortion counter-protestor Nik Severson, during which it was stated that one of the anti-abortion protesters, Bartholomew Schumacher, was a convicted rapist.

Severson claims that when he told protesters about Schumacher’s record:

They called me liar, they screamed at me to leave. I showed a few of them the article and still they denied it. They called the cops on me and the police officer confirmed that the man was who I said he was. The “Christians” shook his hand and hugged him. It was the most disgusting thing I had ever seen in my life.

Interesting how someone who is so ardent in his support of denying women their Constitutional right to do with their bodies as they wish once thought it was perfectly acceptable to tie up and woman and force her to submit to his perverted whims.

AI’s Lucius McMannis absurdly calls some random local-level activist no pro-lifer outside Fargo (and probably almost no pro-lifer in Fargo) has ever heard of “the leader of the anti-abortion side.” And Colmes, who once devoted a whole book chapter to deeming probable serial rapist Bill Clinton “our greatest president,” sneers that “it’s fine, because he’s ‘pro-life.’”

The message is the foulest attempt to revive the War on Women narrative yet: See? Pro-lifers pal around with rapists! Just goes to show you anti-choicers don’t want women controlling their bodies at all!

Time for a reality check (the real kind, not the RH kind).

First, as would be unnecessary to explain in a saner world, the pro-life movement has no magical powers that enable us to stop bad people from adopting our positions or suddenly know the backgrounds of complete strangers who show up at pro-life events (and the sins of isolated pro-life individuals no more indicts the broader movement than do those of violent pro-choice individuals).

Nobody runs background checks on everybody who shows up in front of an abortion clinic—as is the case with any activism on any issue, such as the anti-Iraq War protests of the Bush years or the pro-union protests against Scott Walker. If somebody conducts themselves civilly and shows no signs of being violent or a troublemaker, they’re going to get the benefit of the doubt.

Pro-aborts have leveled lots of outlandish criticisms at pro-lifers over the years, but are we now to blame for not being psychic as well? Really?

Second, the counter to that would be Severson’s allegation that the Fargo pro-life crowd was informed of Schumacher’s crimes and didn’t care. That, admittedly, would reflect badly on those in attendance, if not the 99.9999999999999999999999999999 [give or take a few dozen 9s] percent of pro-lifers who didn’t happen to be in Fargo, North Dakota that day. But there’s ample reason to doubt Severson’s version of events.

To recap, Nik Severson is a classy gent who brandished a “Hail Satan” sign (seriously, what is it with pro-aborts and the devil?), repeatedly swore at pro-lifers, and according to a pro-abortion clinic escort “wasn’t there for the women but for himself,” routinely pestering women for their names and “ask[ing] them to tweet at John Oliver so that he could get on John Oliver’s show”—hardly the record of objectivity, reason, and good faith that makes for reliable uncorroborated testimony. That means we don’t really know:

For one thing, it would take a particularly rabid sort of partisan for someone’s first instinct upon crossing paths with complete strangers to be to run to Google and cross-reference names with sex-offender registries, based solely on the facts that they disagree with you and you don’t like them.

For another, imagine yourself in that crowd—some pro-abortion jerk who’s been hassling you with vulgarity, juvenile signs, and dishonest, malicious caricatures of you as wanting to control women suddenly accuses a fellow pro-lifer of raping someone. Would you be inclined to assume he’s telling the truth, or would you suspect this was instead an escalation of Severson’s already-demonstrated propensity for character assassination?

Speaking for myself, of course I wouldn’t want a rapist representing our cause. If I knew for a fact that he was one, of course I would confront him and force him to leave. But I also wouldn’t take the word of a pro-abortion extremist on faith. I would say, “Okay, I’ll check out your claim for myself when I get home, but until then, he gets the benefit of the doubt. And save your efforts to convince me here, because I don’t trust you.”

One of the abortion cult’s worst characteristics (second to the whole “murdering innocent children for convenience” thing, obviously) is its willingness to exploit rape for emotional manipulation, despite their own abysmal record on rape-related issues. And with the past several months worth of undercover videos putting the abortion industry’s unfathomable evil on full display, it’s easy to see why.

Pro-aborts are absolutely desperate to find a comparable evil to tie pro-lifers to, as a way of pretending they’re not so bad by comparison. But it doesn’t work if it’s not true, folks. The only way to clear your consciences is to confront and repudiate the evil you’re involved in, once and for all.