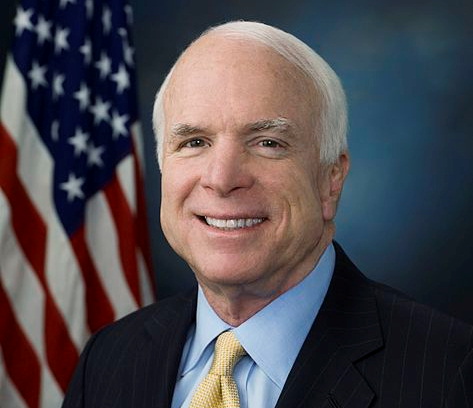 Yesterday, Republican Sen. John McCain suggested to Fox News’s Chris Wallace that it might be time to drop those pesky social issues:

WALLACE: Does your party need to change, especially in its outreach with those groups, on social issues like same sex marriage, on immigration reform?

MCCAIN: I think we have to have a bigger tent. That’s – no doubt about it […] And as far as young women are concerned, absolutely – I don’t think anybody like me, I can state my position on abortion, but, to – other than that, leave the issue alone when we are in the kind of economic situation and, frankly, national security situation we’re in.

WALLACE: When you say leave the issue alone, you would allow, you’d say, freedom of choice?

MCCAIN: I would allow people to have those opinions and respect those opinions. I’m proud of my pro-life position and record. But if someone disagrees with me, I respect your views.

Yes, because John McCain’s approach to winning the White House worked so well last time around.

Like most seasoned politicians, his answer is a bit evasive – at the end, he swaps Wallace’s word “choice” for “opinion.” Well, yes, Senator, we “allow people to have” all sorts of abhorrent opinions. It’s perfectly legal to think whatever you want about fetuses, blacks, Jews, gays, women, Muslims, immigrants, etc., but the real question is what the law lets you do to those groups. And on that point, the rest of McCain’s answer gives the unmistakable impression that he would indeed abandon the unborn.

Sigh. What a departure from the man who proclaimed in 2008, “I am pro-life because I know what it is like to live without human rights,” referring to the five years he spent in a North Vietnamese prison camp.

Or is it? McCain’s voting record is pro-life on balance, but there are a lot of failing grades in there, and it’s an issue that’s often lost out to his greater passion: getting Democrats to like him. During his previous presidential run, he told reporters that “it’s not social issues I care about,” and Sen. Rick Santorum reveals that McCain often sided against introducing pro-life legislation because it was too “divisive.”

So it’s hard to see anything other than partisan opportunism in those suggesting that this reflects some deep need for Republican moderation. John McCain doesn’t need an occasion to advocate a pivot to the middle.

Yes, the GOP took a beating on abortion this year, but not because they opposed it; they suffered because they let the Democrats define what their opposition meant. On the substance, there was no reason for abortion to be Republican Kryptonite. Mitt Romney’s stance was well within the American mainstream, while Barack Obama’s “any time, any reason, at taxpayer expense” one wasn’t. Obama should have been the one constantly on defense.

But when Democrats spun professional drama queen Sandra Fluke’s testimony and the rhetorical blunders of two pro-life senators into an imaginary “war on women,” Team Romney thought dismissing it as a distraction from the economy would suffice, instead of confronting the narrative head-on, explaining its distortions, and forcefully offering an alternate, truer narrative.

Taking stances acceptable to the public isn’t enough; a winning candidate also has to get across a certain level of comfort and confidence in his own convictions. When one side is accusing someone of all kinds of scary things, and the target doesn’t even want to talk about the accusations, it leaves the impression that there’s something to it the public should be scared of. That’s why, despite a majority of Americans reaffirming in August that they’d ban most abortions, after the election, a majority identified themselves as pro-choice: Republicans let the opposition define what “pro-life” and “pro-choice” mean.

Politicians like Romney take the right positions but screw up the follow-through, and politicians like McCain take that as evidence that the positions themselves were the problem. How about we try standing on principle and making the case for it, and see what happens?