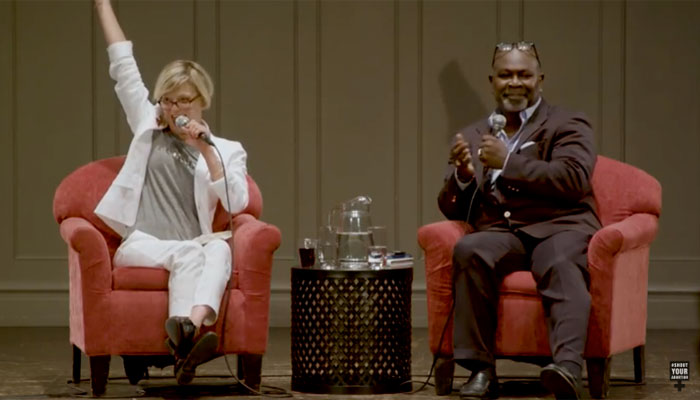 The days of abortion advocates calling abortion “rare” and “unfortunate” are clearly over. So are the days of being able to claim, “No one is really pro-abortion. No one actually likes it.”

Enter self-proclaimed ‘Christian’ abortionist Willie Parker and actress Martha Plimpton. Sadly, these (and other) abortion advocates do openly celebrate the violence of killing a preborn child. Between movements like #ShoutYourAbortion and Planned Parenthood fighting for abortion like it’s saving someone’s life instead of taking it, abortion has become a symbol of pride for many. Actress Martha Plimpton, however, has taken the pride of having an abortion to an incredulous level.

In June, at a Seattle Town Hall #ShoutYourAbortion event, the Goonies actress shared a stage with Parker. The video of the event is suddenly making headlines, as the details about Plimpton’s abortion enthusiasm emerge:

In the video, Plimpton talks about the violent act of killing a preborn baby as if she’s cheering for her favorite team that has won a championship game. She opens the show, where she interviews Parker, by praising the city where she had her first abortion. About one minute into the video she says:

Seattle has some particular significance for me for lots of reasons. I’ve got a lot of family here, some of whom are here in the audience tonight. I also had my first abortion here at the Seattle Planned Parenthood!

She then throws her arm up in the air and yells, “Yay!” And in response, the audience bursts into cheers.

Notice I said “first.” I said “first.” I don’t want Seattle–I don’t want you guys to feel insecure–it was my best one. Heads and tails above the rest. If I could Yelp review it, I totally would. And if that doctor’s here tonight, I don’t remember you at all, I was 19. I was 19, but I thank you nonetheless. You probably won’t remember because I wasn’t that famous then.

Joking aside, Plimpton was actually quite famous by age 19, and had been in a relationship with well-known actor River Phoenix (now deceased) around that time frame, for approximately three years.

Parker spends a good deal of the show linking his ‘faith’ to his practice of killing preborn babies, justifying his profession. He even claims that the Hippocratic Oath, taken by physicians, justifies abortion. The oath’s most famous line is “First, do no harm.” Parker asserts that in order to fulfill that, if a woman wants an abortion, even if he couldn’t do it, he should send her to someone who can so he does not “harm” her by not aborting her child.

And the baby? In this doctor’s mind, the baby isn’t an actual baby until he or she is born. He claims, “I’ve never killed a baby. I’ve ended pregnancies, but I’ve never killed a baby.” Clearly, this is an example of Parker using semantics to obscure what actually happens in an abortion, and to obscure the fact that a human being is indeed growing in the womb when an abortion is committed. Unless Parker has delivered those babies into the arms of their mothers, alive, then Parker has definitely killed babies:

Abortion is an extremely violent procedure which takes the life of a preborn human being. All pregnancies eventually end. But the goal of an abortion isn’t to merely “end a pregnancy” as Parker suggests. The goal is to end it immediately, which, by its very nature, must rip the child from the womb prematurely, killing the child. If there’s no child, then there can be no abortion. Former abortionist Dr. Anthony Levatino describes one very violent type of abortion procedure, the D&E, typically committed in the second trimester of pregnancy:

At about 43 minutes in, Parker rambles a bit as he answers a question about late-term abortion and the presidential race:

Even then candidate Hillary Clinton, and Donald Trump, both of them were notoriously off-base….

I think why they focus on this is that at that point the pregnancy looks so much like a baby that it’s easy for them to use that language to blur the lines and say, “at that point it’s a baby, it’s almost a baby.” ... But what it means is stages of development matter.

And so they try to misrepresent, they take the pregnancy later and its development; it’s not fully functional, because if it were, you wouldn’t be able to have an abortion.

Plimpton wonders if abortion opponents bring up late-term abortion so they can argue that abortion is “bad.” Parker agrees, but adds, “[T]he reality is, abortions aren’t bad; they aren’t good; they’re health care.”

Again the audience applauds and cheers nonsensically in response to this gobbledygook remark. Isn’t actual health care supposed to help and not violently kill human beings? Isn’t treating illness a good thing? Then, if Parker actually believes that abortion is “health care,” why would he claim that abortions “aren’t good”? Perhaps it’s because he knows the truly violent nature of what he does for a living… and it is in no way “good” or “health care.”

A person starting the broadcast late and hearing the audio without context might think this group of people was laughing over a silly night at a restaurant. Instead, Plimpton, Parker, and an audience full of people are sharing laughter over death. They are vocally celebrating intentional, violent death.

Parker speaks like a kind grandfather who wants to care for women. But in reality, he is an abortionist who makes large sums of money for killing preborn children; he justifies this because, in his mind, those children only look like babies; they’re not really babies. This is not scientific in any way. Live Action News’ Kristi Burton Brown wrote in 2014:

Instead of manufacturing an arbitrary standard, there is already a simple – and scientifically accurate – concrete standard of when our humanity attaches. When a human first comes into existence, she is human and worthy of protection. (I don’t personally care if you want to call her a child, an infant, a baby, or a zygote. The point is that all of these are stages of human development – just as adolescent, teenager, adult, and elderly are – and there is no “un-valuable” stage of human life.) Nor is there any stage of human life at which we are not human.

What’s more disturbing is the implication that a child who is “not fully functional” should be killed by abortion. This is discrimination, plain and simple. A tragic medical condition is not always a death sentence — but abortion is.

The evening of June 6 may have been fun for some, but many people now seeing the video are thoroughly disgusted.

Conservative and columnist and podcaster Steven Crowder posted about the video on Tuesday:

Disgusting. Even if you think it should be legal.

I can’t imagine being that cold-hearted and callous.

Martha tell us what else you’re proud about. Have you drowned any kittens or kick some puppies today?

This is beyond wrong, this is so troubling

And even an abortion advocate chimed in:

I’m pro-choice, but glorifying abortion is disgusting. This woman may be that regressive feminist straight out of South Park

This folks, this is what a vile human being looks like. #PP @MarthaPlimpton https://t.co/6ZYYq4ISNN

It is vile to brag about having multiple abortions, let alone even one. It is not something to trivialize. Shame on her.

Violence is never a laughing matter, whether in the womb or outside of it. Plimpton and Parker have yet to get that memo.