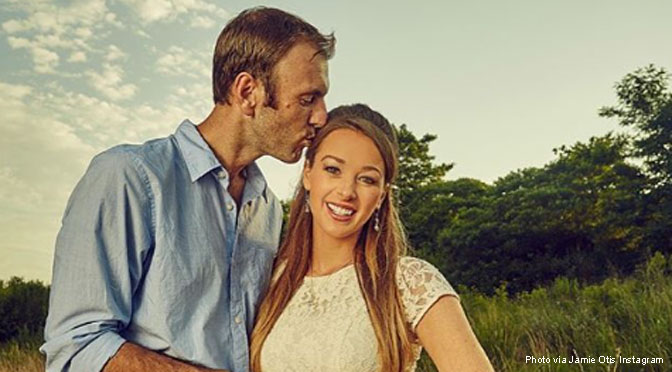 One of the handful of successful couples from FYI’s popular reality show, Married at First Sight, recently shared news about their first pregnancy. But Doug and Jamie Otis Hehner’s joy soon turned to tragedy, as Jamie miscarried their son at 17 weeks. Now, they’re going public with the decision to give their son a name. Otis shares about the experience on her blog, saying that for her, “writing is therapy.” She writes of the shock and disbelief at losing their son:

I had been bleeding for a few weeks prior, but every time we checked the baby (which was becoming twice a week by now) the little one was kicking, moving, and the heartbeat was going strong….

… I was literally on Facebook planning our gender reveal party…Until the doctor flat out said “The prognosis is very poor and there is nothing you can do to help it. You have very little amniotic fluid for the baby.” I’m a nurse so I know how important amniotic fluid is for growth and development, but I just couldn’t believe my ears.

I’ll never get to see this Angel again on earth. He was given to us so graciously by God, and then God took him away way too early. My heart hurts so bad. Losing our baby has been the most terrible experience. I wish no one would ever have to endure this.

The couple has named their son Johnathan Edward Hehner. Independent Journal Review reports that “[t]he couple chose the name Johnathan for its special meaning— ‘gift from God.’ Edward is Doug’s middle name after his grandfather.”

Since the miscarriage, Jamie continues to write on her blog about the daily pain she is experiencing from the loss of her baby boy:

Today marks what should be a milestone for my angel, Johnathan Edward. We should be 19 weeks along today…. It tears me up inside that my little boy should be 19 weeks today. And it doesn’t help that I got an email update from a pregnancy app telling me all about the milestones he’d be making this week. (I had immediately deleted all the apps I followed so this wouldn’t happen.) And ya know what, I almost don’t mind that I am getting the email updates still. I don’t want to forget him. I don’t want to just “go on” with life.