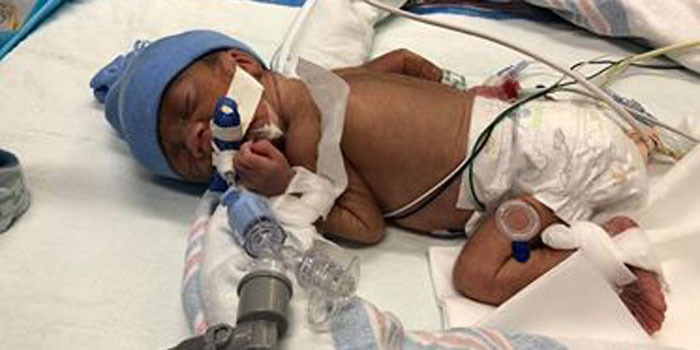 My name is Samantha Curtis. I’m 20 years old. And my son, Malachi Elliot, was born premature at 25 weeks and 3 days. 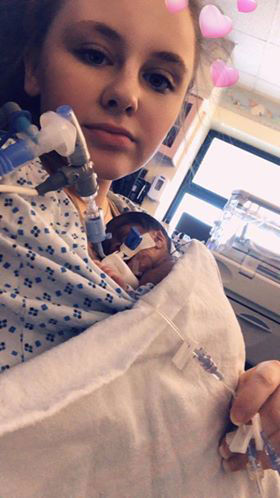 I wasn’t supposed to get pregnant. I was diagnosed with PCOS — polycystic ovarian syndrome — in 2016. PCOS is when you have ovarian cysts that transfer onto your eggs making it impossible for the sperm to reach the egg. Doctors put me on birth control in an attempt to balance my hormones, so my body could try to fight off the cysts instead.

In July 2017, I got pregnant. Over the course of the next 6.5 months of this beautiful baby boy growing inside me, we went through a lot, including a lot of stress. I moved to Virginia to be with my baby’s father, but things got very bad (we’re both so young) and I ended up moving back. Two days before I moved, I suffered some trauma to my stomach, which resulted in Malachi’s heart stopping. When I went to the ER — and I have absolutely no clue what they did or how they did it, or if it was just too quiet and slow to hear — they got his heart beating again. 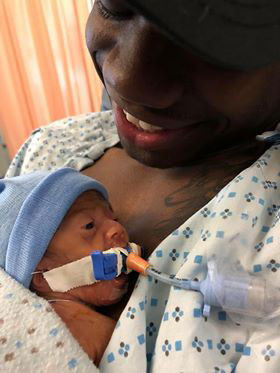 I moved home, got two jobs, and was trying to get on my feet (the move really messed me up financially), and then I got ulcers. But every night I sang to Malachi, or I told him a story about all the fun we’re going to have and how excited I am to hug him and kiss him and hold his little hand. I’d apologize for the stress I was causing on him. And when I cried, I’d apologize for that too.

Then, on January 1st, 2018, I began having noticeable contractions at 7:00 a.m. I was in the hospital by 9:00 a.m. (4 cm dilated), and was transferred and arrived to a bigger, more sufficient hospital for a premature 25 weeker by 12:45 p.m. (fully dilated before they could even check me in as a patient). 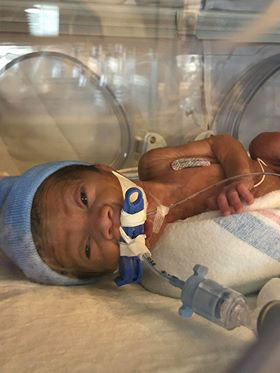 I gave birth to my handsome boy at 2:26 p.m. on that day. He came out doing what the doctors said he wouldn’t: he opened his big eyes and cried. Because he was premature, his lungs weren’t even supposed to be developed enough for that. They said he’d be lethargic and not breathing, and encouraged me not to get scared. But, sure enough, he was looking right at me, crying and squirming.

For the past 22 days, Malachi has done nothing but fight. He got a staph infection that spread to his heart, but it’s stopped growing and the swelling is going away, too.

Malachi is such a fighter, and I want the world to know his story.