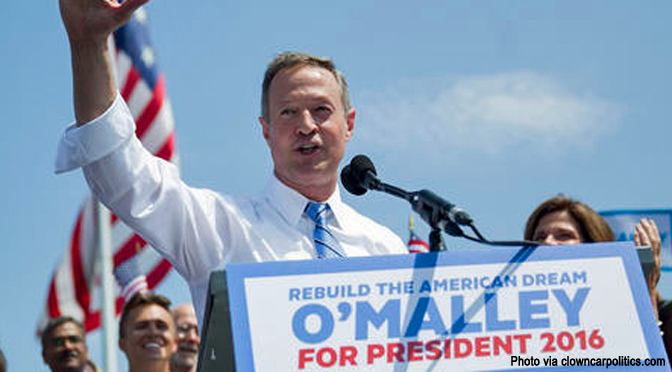 Earlier this month, presidential candidate Governor Martin O’Malley (D-MD) found the need to apologize for mentioning at the Netroots Nations conference that “all lives matter.”

The mostly black audience was not too pleased to hear O’Malley say “Black lives matter. White lives matter. All lives matter.” They booed him off the stage, and  O’Malley claimed “it was a mistake on my part” and apologized while on This Week in Blackness.

For some to be up in arms because O’Malley dared to mention that “all lives matter” is a scenario many find to be ridiculous. One particular commentary, by Howard Kurtz, said that O’Malley “wimped out.” Kurtz also criticized O’Malley for his “missed opportunity” with Planned Parenthood and abortion….

Another missed opportunity: O’Malley could have made a daring move by taking on Planned Parenthood over those truly disturbing undercover videos released by a pro-life group. Even some strong pro-choice advocates have said they found it troubling to watch Planned Parenthood officials nonchalantly discussing the merchandizing of fetal parts and ways in which to crush fetuses in a way to preserve the most marketable organs—including one yesterday in which an executive haggled over the price of fetal tissue sales because she wants “a Lamborghini.” Planned Parenthood President Cecile Richards apologized after the first video, although the group attacked yesterday’s release as a “heavily edited” product by “widely discredited” activists.

O’Malley could have both supported abortion rights and decried that kind of cavalier talk about fetal parts. Of course, Hillary Clinton hasn’t addressed the videos either, but that’s precisely the point.

It is not just commentary from Kurtz though which notably brings abortion into the discussion of “all lives matter.” Another presidential candidate, Governor Jeb Bush (R-FL), did not think O’Malley should have apologized, and also had his own take on the matter: “No, for crying out loud, no. We’re so uptight and so politically correct now that we apologize for saying lives matter?” the former Florida governor and Republican presidential candidate said to a press gaggle in an exchange captured on video by American Bridge.

“Life is precious. It’s a gift from God. I mean, I frankly think it’s one of the most important values that we have. I know in the political context it’s a slogan, I guess.”

“Should he have apologized, no? If he believes that white lives matter, which I hope he does, then he shouldn’t apologize to a group that seems to disagree with it.”

Whether or not “in the political context it’s a slogan,” all lives do matter, regardless if they’re white or black, preborn or born. And it’s a shame that we have to be so politically correct to not see that and twist around what should be a simple but nevertheless important phrase.