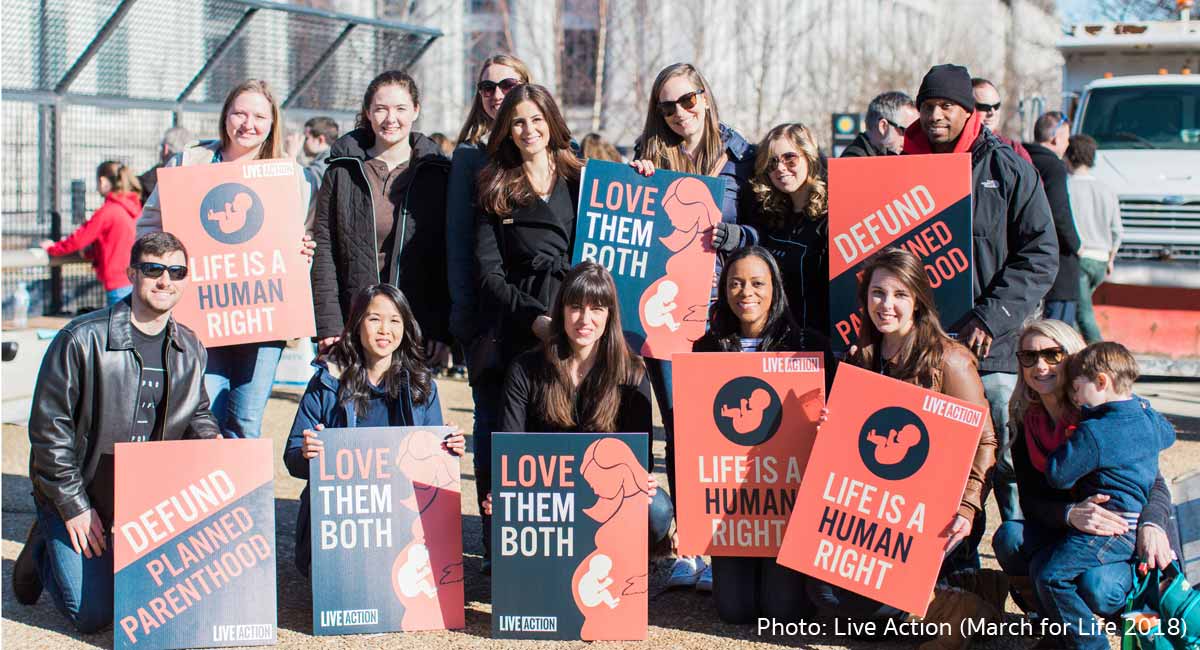 In 2003, when she was just 15, Lila Rose founded Live Action to expose the reality of what abortion is, what it does to preborn children, and how it harms women. Just three years later, she started undercover investigations at UCLA. Now, 15 years later, Live Action is a non-partisan, non-profit organization, which created and produced the first nationally televised undercover investigation of the abortion industry and continues to work to change hearts and minds through educational media, human interest storytelling, and investigative reporting.

With the largest online following in the pro-life movement, Live Action is leading the charge to show the humanity of the preborn, and to expose how abortion disempowers women — and to make abortion not just illegal, but unthinkable.

In May, Live Action released an investigative report and docuseries exposing how Planned Parenthood enables the sexual abuse of children and often acts as an accomplice for their abusers. After the report was released, 56 members of Congress sent a letter to the Department of Health and Human Services (HHS) calling for an investigation into Planned Parenthood, and Live Action also held a joint press conference with congressional pro-life leaders calling for abortion facilities to be fully defunded.

Originally launched in 2016, Live Action’s Abortion Procedures series continues to help change hearts and minds by showing the reality of abortion without using graphic or gruesome images. Former abortionist and board-certified OB/GYN Dr. Anthony Levatino explains the different procedures used to commit abortion, and discusses why he became pro-life. He also speaks about whether abortion is ever medically necessary, and more.

Since the release, Live Action has continued to film around the country, showing the videos to people in cities like New York, Miami, San Francisco, Seattle, and Los Angeles. The videos have gained over 100 million views, and repeatedly have had a profound effect on those who have seen them.

Live Action’s Abortion Procedures videos haven’t just changed hearts and minds on abortion. They have actually saved the lives of preborn babies, as mothers watched the videos and decided not to have an abortion — preventing them from experiencing a lifetime of heartache and regret.

4. The face of the new pro-life movement

Live Action founder and president Lila Rose was featured in a short documentary by The Atlantic as the face of the Millennial pro-life movement. Her work to bring down the abuses of the abortion industry continues today, and the media is taking notice.

“The popular narrative has been that abortion is going to somehow empower women,” she said in the film, “when we know that it’s an act of violence against our children.”

Earlier this year, the Department of Health and Human Services began considering a rule change to the Title X federal family planning program. The new rule would ban organizations who receive Title X funding from referring women for or committing abortions, stripping Planned Parenthood of an estimated $60 million in taxpayer funding. It would also mandate that Title X recipients follow local and state laws on the reporting of suspected sexual abuse — a big problem for Planned Parenthood.

Live Action called on supporters to contact HHS and show they were in favor of officially adopting the Protect Life rule, garnering over 10,500 signatures.

Live Action continues to have the largest social media following among pro-life groups, with over two million followers on Facebook, and over 200,000 followers on Twitter, dwarfing Planned Parenthood’s followers. Live Action’s Facebook page in particular is in the top 35 non-profit organizations on Facebook for the entire United States, and is ranked #1 for engagement among both pro-life and pro-abortion groups.

With the comments, likes, and shares taken together, Live Action’s combined reach is around 500,000 people every week.

Abortion is not just a political issue; it touches people’s lives, and Live Action and Live Action News have the honor of telling their stories, which are an integral part of the mission to change hearts and minds. They expose the violence and exploitation of the abortion industry, the pain mothers feel upon losing their children, the courage of mothers who choose life, and the humanity of the preborn.

Jennifer Christie’s story was shared over 16,000 times, and had over 2.6 million views. Christie was raped on a business trip, but she kept her baby, and is now raising him with her husband, Jeff.

Tyler Sheppard lost his sister, Cree, when she underwent an abortion at Planned Parenthood. His testimony was shared thousands of times, and gained almost 500,000 views. In the video, he laments not just losing his sister, but losing his niece or nephew as well.

Early this year, Live Action launched its first online store, selling merchandise and educational materials, including shirts for both men and women. These items help spread the word about the mission to defend the preborn and build a culture of life, and 100% of the proceeds go towards the work of Live Action.

Through Live Action News, millions of readers are reached every week. Through educational media, human interest storytelling, compelling interviews, investigative reporting, and more, we work to shift public opinion on abortion and other pro-life and human rights issues.

Live Action regularly spotlights pro-life speeches and testimonies, with the speech from Sen. James Lankford being particularly moving, gaining over 5.6 million views and over 112,000 shares. Lankford spoke out about the Planned Parenthood baby parts scandal in which the abortion corporation would commit abortions and then receive money from third party organ harvesters for the bodies of those aborted children.

Live Action has made great gains in 2018, and we are already looking forward to 2019. Will you help us continue in our fight for life?