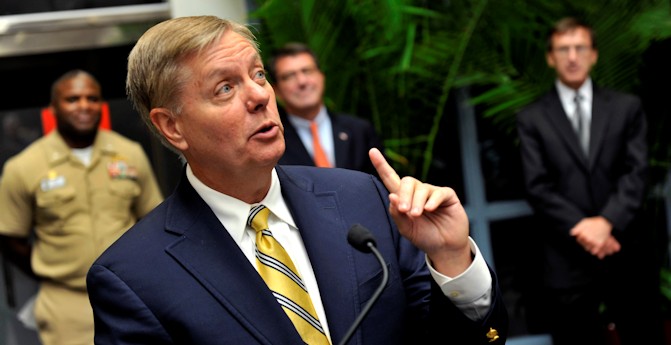 Senator Lindsey Graham is on a roll, and not in a good way.

Just days after announcing his willingness to make the Pain-Capable Unborn Child Protection Act virtually useless in actually saving babies just to appease a handful of cowardly GOP turncoats, the South Carolina Republican thought it would be a good idea to bring up attorney general nominee Loretta Lynch’s past support for partial-birth abortion…not because it shows she’s a monstrous extremist who shouldn’t be a dogcatcher, let alone the nation’s top cop, but because he wants to demonstrate how bipartisan he is by supporting her anyway.

“In 2006, you signed an amicus brief supporting Planned Parenthood’s opposition to partial-birth abortion ban; is that correct?” said Graham at Lynch’s confirmation hearing in the Senate Judiciary Committee.

“Yes,” said Lynch, “I was one of a number of former Department of Justice officials [who signed it].”

“Although, the amicus brief that we signed was focused on the issue of the facial issues of the law, and how it might impact the perception of law enforcement’s discretion and independence,” she said.

“The only reason I mentioned that,” said Graham, “is that if there’s a Republican president in the future, an attorney general nominee takes an opposite view on an issue like abortion, I hope our friends on the other side will acknowledge it’s OK to be an advocate for a cause, as their lawyer. That doesn’t disqualify you from serving.”

So the person under consideration to become the nation’s chief law-enforcement officer is on record as fighting to let people partially deliver babies, stab them in the back of the head, and then suck their brains out, and not only does Graham not see a problem with putting such a woman in power, but he actually takes pride in not seeing a problem.

This may come as a shock, Senator, but you’re not there to win a Mr. Congeniality contest. Your job is to protect the rights of the people, not to sacrifice the littlest people just so the press will praise you for being one of the “good” Republicans. The Constitution vests in you the power to confirm presidential nominees not so you can go through the motions and get the occasional clip that’ll look good in a campaign ad, but to stop the president from putting bad public servants in charge.

Graham’s endless need to pander to moderates must be pathological, because evidence sure didn’t get him to his cockamamie theory that rubber-stamping Democrat nominees will get them to return the favor. Pro-aborts never compromise with pro-lifers to begin with, and they’ve never put politics aside for Republican nominees, from potential judges to all of George W. Bush’s own AG candidates.

Other than usually being more sanitary, partial-birth abortion is virtually indistinguishable from the gut-wrenching crimes that earned Kermit Gosnell life in prison. It’s the most obviously evil variation of an already horrifying practice, supported only by the fringe. The confirmation of an attorney general who believes in it would be an insult to any country that still prides itself on compassion and justice. Morally and tactically, this is not a difficult call. But if Lindsey Graham thinks that even here, basic right and wrong should take a backseat to his own unique blend of pandering and posturing, then his potential presidential campaign is in for a rude awakening.