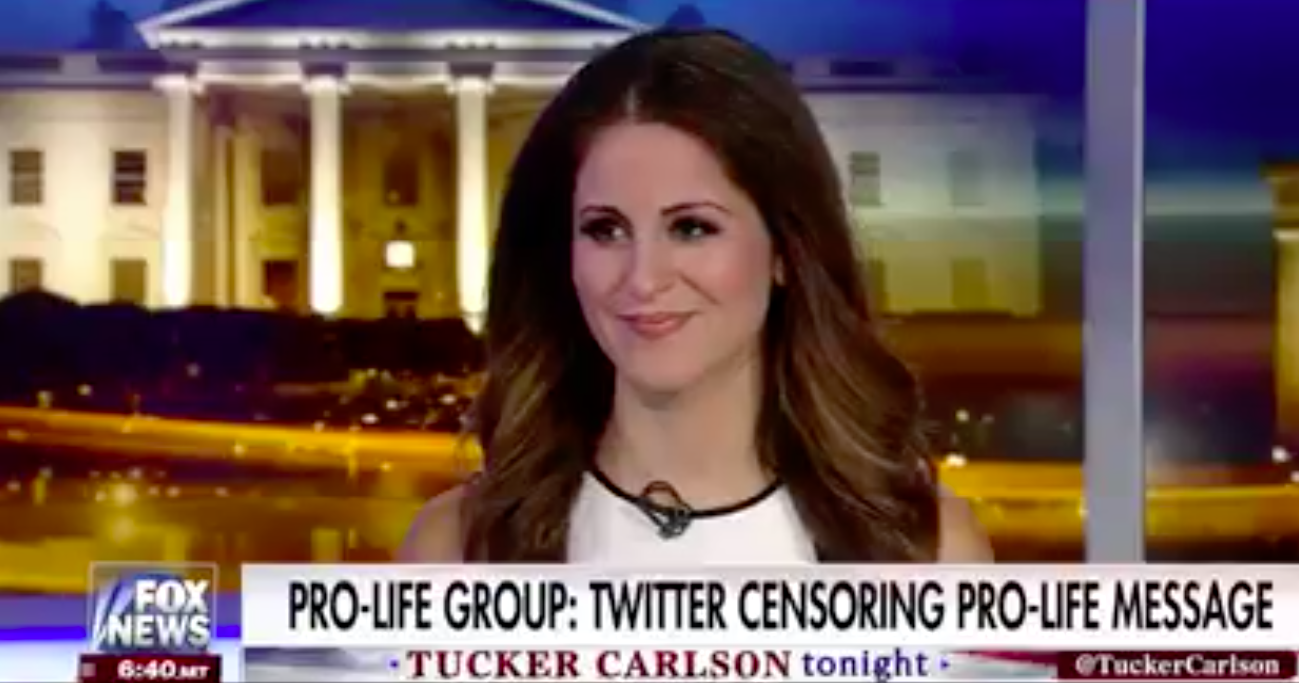 On Monday evening, Lila Rose sat down with Tucker Carlson to discuss Twitter’s attempt to suppress her and Live Action’s life-affirming tweets. Suppression of the pro-life message, Rose contends, prevents the American people from hearing the truth about abortions and Planned Parenthood’s lack of real health care for women.

Rose appeared on “Tucker Carlson Tonight” to talk about Twitter’s year-long attempt to block ad buys for pro-life tweets that focused on ultrasounds and prenatal care. Apparently, the social media company found these tweets offensive, while, at the same time, it allowed Planned Parenthood, America’s largest abortion corporation, to promote its tweets.

The following tweet from Lila’s account, @LilaGraceRose, is one of many that was flagged for violating Twitter’s hate and sensitive topic policy. The tweet is almost word-for-word a Dr. Seuss quote, with pro-life hashtags added on.

“Twitter is refusing to run the ad. Twitter says Live Action has tweeted sensitive material in the past; unless Live Action censors itself and deletes these tweets, Twitter says [Live Action] will not be allowed to buy ads,” Carlson said. “It’s hard to believe this. You’re trying to give money to Twitter and they’re turning it down on what sounds like ideological grounds.”

Rose called out the blatant bias and favoritism Twitter has for abortion chain Planned Parenthood by not suppressing any of its tweets while flagging her and Live Action’s accounts on a continual basis.

“Planned Parenthood, the nation’s biggest abortion chain, is advertising on Twitter, but Live Action, which is the leading pro-life platform for the pro-life movement, is not allowed to,” Rose said. “And the kind of tweets that they’re flagging, Tucker – that they’re calling violation of their hate and sensitive policy – show ultrasound images; they’re fact-checks of Planned Parenthood; they’re discussing the prenatal life and its beauty. These are the sorts of tweets that Twitter is trying to block.”

Twitter’s shareholders and users don’t know about Live Action being silenced by the social media company, but Rose said her pro-life organization is dedicated to getting the word out:

Rose called out the hypocrisy the social media company has shown by allowing Planned Parenthood to promote its tweets – which by definition would be as offensive as Live Action’s in terms of content – while flagging Live Action’s tweets as inappropriate.

“[Planned Parenthood has] over a billion-dollar budget, and half of a billion dollars is coming from taxpayers, and Planned Parenthood is committing almost 900 abortions a day, but they’re allowed to do promotion, and they’re not violating the hate and sensitive policy,” Rose said. “Twitter was responding to us for months, saying, ‘This is banned. We won’t let you put this out.’ And finally, we got in touch with a real-life person, and they told us that … we would have to actually delete almost all of our tweets and delete our website and create a new website in order to do advertising on Twitter.”

Tucker Carlson reached out to Twitter and received the following statement:

Twitter has clear, transparent rules that every advertiser is required to follow, and the political viewpoints of an organization do not impact how these rules are applied.

Rose pointed out that the restriction of free speech is alive and well on college campuses and in the media and that Twitter, by flagging content that is obviously not in violation of the company’s policy, is going against its own mission.

“I think the big picture here, Tucker, is that there’s a epidemic on college campuses, in legacy media, to silence speech that you don’t like, and Twitter’s supposed to be a place – I mean, their own mission statement says that they’re a place to empower people, to share ideas and information without any blocks, with freedom to get it out to as many people as possible. And yet, that’s exactly what they’re doing here, and it’s clearly ideological,” Rose said.

Planned Parenthood commits over 320,000 abortions every year while continuing to receive more than $500 million in taxpayer money. And still, Twitter looks as though it’s helping the abortion giant’s agenda by suppressing messages contrary to Planned Parenthood’s talking points.

“Their tweets that they’re promoting are, you know, ultimately going to go towards their taxpayer funding and their public image. So the bias is so blatant, it’s almost unbelievable,” Rose said. “The key thing here is the information needs to be available to every American about the humanity of life in the womb. I mean, that’s our mission; that’s what we’re fighting for: life in the womb is precious; every life is precious. And so we’re not going to back down because Twitter’s pushing back.”

Lila Rose assured Carlson’s audience that she and Live Action will continue to expose the truth about Planned Parenthood’s abortion business and will continue to fight for the humanity of every preborn child. The truth cannot be silenced.