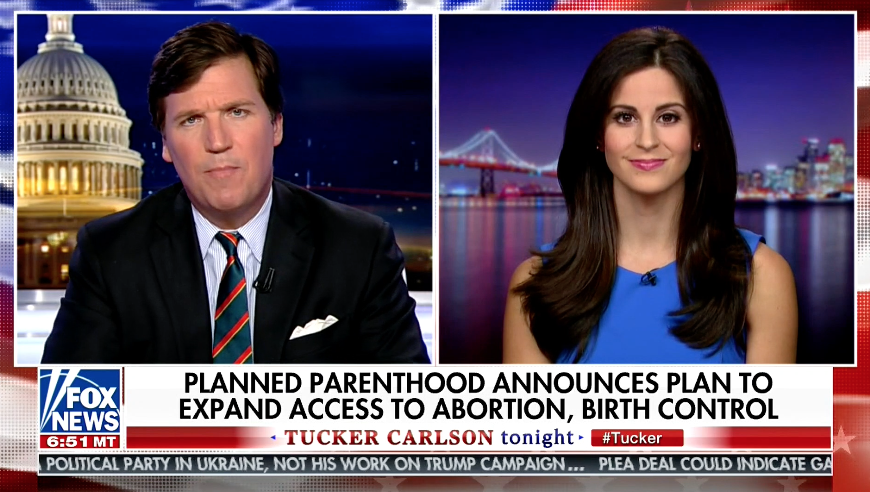 Live Action founder and president Lila Rose appeared on “Tucker Carlson Tonight” to discuss Planned Parenthood’s push to expand access to abortion and cut back on health care services. The organization’s representatives frequently argue that they simply want to safeguard a woman’s right to “choice,” claiming to be a legitimate health care provider. But the organization’s annual report shows each year that this is not true. Health care services at Planned Parenthood have been plummeting for years, while abortion steadily increases.

“They’re claiming this word, ‘abortion access,’ and it’s just like that term ‘pro-choice,’ and it’s really abortion pressure,” she said. “It’s really the only choice of abortion. Planned Parenthood is not focusing on expanding access to prenatal support, pregnancy resources, parenting support, adoption referral or adoption support. Planned Parenthood is focused on abortion through all nine months, for any reason, taxpayer funded, for any woman, anywhere, and that really reveals how out of touch they are with most women and most Americans.”

Planned Parenthood is pushing for abortion-on-demand, for any reason, through all nine months of pregnancy — all at the expense of taxpayers. This is extreme and out-of-touch with where a majority of Americans stand on abortion. I share with @TuckerCarlson on @FoxNews. pic.twitter.com/hwb0YXOvBn

Carlson rightly pointed out that most people are not necessarily clamoring for the total and complete criminalization of abortion; however, they also do not support Planned Parenthood’s extremist agenda. Polling repeatedly shows that Americans want abortion heavily restricted.

“Over two-thirds of Americans, according to Gallup polling, want restrictions on abortions,” Rose noted. “And some of them want restrictions in the second, the third trimester, they want waiting periods, they want different forms of ensuring that women have other options. So this is really showing that Planned Parenthood is not in touch with where the country is.”

Polling does repeatedly show that Americans don’t support the kind of pro-abortion extremism that Planned Parenthood promotes. Americans don’t support abortion on-demand through all nine months of pregnancy, and they don’t want it to be taxpayer-funded. Yet Planned Parenthood obstinately ignores the American people and promotes abortions at all cost, even filing lawsuits so they can continue to abort babies based on race, gender, and disability.

“I think this is going to raise up more people to oppose them than support them,” Rose concluded.