Getting the word out: each of us is loved.

The March for Life occurred just this past weekend in Washington, D.C. However, the annual March has not been the only event to raise awareness regarding Roe v. Wade and the hope of the pro-life movement to abolish abortion. Lila Rose, founder and president of Live Action, spoke at other such events this past weekend. 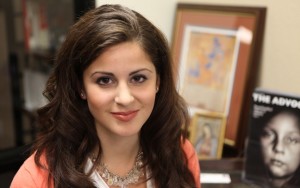 On Thursday, January 24, Lila Rose spoke at the March for Life Youth Rally 2013, given by Stand True. Live Action’s own schedule of events describes the event as “a must-attend event for youth!” The event was well-attended not only by youth, though, but by those of all ages. As she was introduced, Lila was called one of the “coolest” pro-life youth leaders by emcee Eric Sheidler.

Lila’s allotted eight-minute speech was not just “cool,” but also extremely powerful. The following paragraphs are a summary of her statements.

She mentioned that this wasn’t just the coolest cause, but also the greatest cause and so beautiful. Lila reflected on how our right to life is the most fundamental human right, as it also has to do with the human person. Since we’ve survived abortion, the greatest human rights abuse we’ve ever seen, it is truly a gift to be able to live our lives. All this is occurring as we face a great evil, with a great holocaust going on all around us.

Lila first found out about abortion when she was nine years old and looking through a handbook on abortions, which contained a graphic image of a 10-week-old aborted fetus. Though Lila put it away, she had to look at it again. She wondered if this was really happening, how anyone could do this to a baby. And so Lila spoke on how many have seen abortion for what it really is. As Lila so rightly articulated, the pro-life movement feels that enough is enough. And we will not stop fighting until the smallest child is saved from abortion.

Lila reminded the crowd that we will have our work cut out for us, on campuses as well as in our communities. Our work will continue after the March for Life. Young people may be targeted for abortions, but we also know better. Planned Parenthood was also mentioned by name for its lies, its abuse, and the deaths it has caused.

To address in a more particular manner what abortion has really done to our country, Lila mentioned how, during the March, Live Action would have signs featuring pictures of an ultrasound and saying “future doctor,” “future scientist,” etc. Lila wants us to share our message, including with the media, loud and clear, wherever we go. Our country cannot survive or continue if we allow this great destroyer of peace to affect our country. And so, we must dedicate ourselves every day.

Lila’s conclusion was perhaps the most memorable, as she went into what we can learn from the pro-life movement. With the knowledge that we are loved, we are able to love others. God loves us first, and He loves each one of us, whom he has created each with a specific will and purpose. Lila is thankful for being loved, and she wants God to use her to stop these injustices by showing love to the world. If we let God use us, we will be going on an adventure as we see our nation and world transformed. God has plans for us, just as He has plans for the unborn child – greater plans than we could have ever dreamed. It is this love which will make a country.

Whether one is hearing Lila Rose’s testimony for the first time or not, her words are truly inspiring. She is able to rouse young and old alike, as she really speaks to the heart of the movement and what is important, providing not only great advice, but also a useful perspective. To love is not only a good lesson, but a good summary of the pro-life movement. While the pro-life movement is not solely a religious one, Lila makes a kind and impassioned case as she encourages those who believe that God is a big part of what we do. So Lila Rose truly is one of the “coolest” pro-life leaders – not only with her energy, but in being so young herself. She shows how young people truly can make a difference.