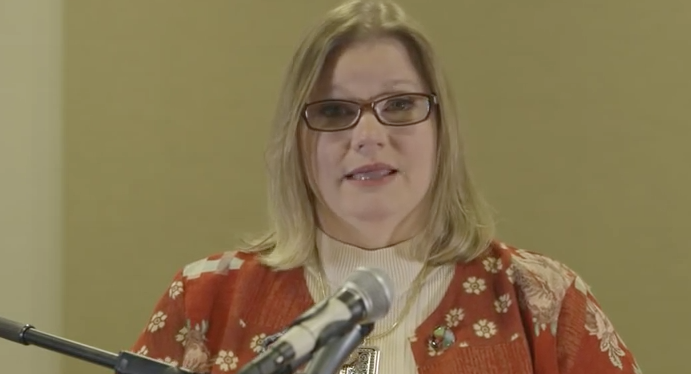 Ruth Yorston grew up in what she describes as a dysfunctional household with two parents who were both raised by alcoholics, and a father who himself was an alcoholic. But despite this, her parents were very intelligent and they took great pride in this. Her father was a member of MENSA, and her mother put herself through college after a depression and had a successful career researching leukemia.

“We kept many secrets. He was a broken man and my mom was a broken woman. We all are, but our brokenness brought silence,” said Yorston in a speech for the Pro-Life Action League. One of those secrets had to do with abortion.

The silence in Yorston’s household included an inability to discuss issues on a personal and emotional level. Her family spoke about politics and debated at the dinner table, but they never discussed abortion. They wanted their children to be involved as activists who fought for what they believed in, and despite never discussing the issue, her parents did believe in a right to abortion. Her father penned an Op-Ed piece for a newspaper on a woman’s right to choose abortion, and her mother marched on Washington complete with a bloody coat hanger pin. This, says Yorston, is how she found out that she was supposed to be pro-choice.

“I bought it hook, line, and sinker. Everything that I started being taught about life or the lack of life and I didn’t think beyond that,” said Yorston.

Yorston admired her mother greatly as she watched her win a seat on the school board when no other woman in their community had ever done that. Her mother turned down a job at Yale in order to stay home and be a mom. She broke the glass ceiling for women in their community. And eventually, her mother would take a job at an abortion clinic.

After struggling financially at college, Yorston returned home to look for a job and was given the opportunity to work with her mother at that abortion facility. She jumped at the chance, just because she considered it an honor to work with her mother, but she admits she didn’t know what she was getting into.

Yorston was the receptionist, and she welcomed girls and women into the clinic, but she never went downstairs to where the abortions took place. She never met the doctors or nurses in the year that she worked there. Downstairs felt like a dark place to her, and while she was curious about how abortions were performed, she never went down those stairs.

At the same time, she was very active in her Christian church, where abortion was never discussed. She read the Bible so often that it was highlighted, with pages marked. She would even bring it to work and place it on her desk at the clinic where it was visible to all the patients, something she feels extreme guilt over today. She said she knows that seeing that Bible on her desk gave the impression to the patients that Jesus was somehow okay with abortion.

While working at the clinic, Yorston began dating a Christian man. When she told him she worked at the abortion clinic, he was silent. Later he would tell her that as he dropped her off and drove home he prayed.

“The Lord spoke to him,” said Yorston, “And said, ‘You’re right. I don’t want you dating a woman who kills children for a living but you also can’t just leave without telling her why.’”

The next day he gave her a book that featured black and white ultrasound images. Yorston had never seen these images before. She had never learned anything about fetal development. Because the man she was dating refused to remain silent, she was finally seeing the truth about abortion.

“Those scales fell from my eyes and I was shocked and I thought, what in the world have I been doing? And I was so convicted and I was so grieved that I quit my job within the next week,” said Yorston.

Her parents were angry with her but she remained living at their home. She would question them on why they believed in abortion, but there was always love between them.

It was during this time that the pieces started to fall together. Yorston learned that her father had been married once before and had three sons whom he was separated from and never spoke of. Her mother had had a miscarriage right before becoming pregnant with Yorston. Then her mother told her something Yorston had never known: when she was pregnant with Yorston, she feared that she wouldn’t be born “healthy” or “normal” and told the doctor that if the baby wasn’t healthy that they needed to “take care of this now.” This was in 1963.

“I understand what my mom was saying was,” said Yorston, “[…] that if I wasn’t healthy that she would abort me, but I didn’t put it together in my head until over 20 years later […] that she was making that choice about me.”

Yorston says that being pro-abortion happened to her because of silence – because her church was silent about abortion and because her parents had these buried secrets about their children.

“Silence is not an option,” said Yorston. “It must not be an option for us. […] If we don’t speak what we know, we’re part of the problem.”

Years later, as her mother became ill, Yorston brought her into her home and took care of her. At the same time, Yorston was running Greater Columbus Right to Life out of her basement. She said her mother, though still pro-choice, became the most active volunteer for the group. She read information she had never heard of before such as the link between abortion and breast cancer. She even went to pro-life fundraisers.

“If we want to bring an end to abortion, one of the things that we need to do is to help the abortion worker,” said Yorston. “To love the abortion worker. And to understand how in the world we’ve ever made the decisions and the choices that we’ve made to find ourselves in the place that we found ourselves. To be in the midst of such darkness and still somehow manage to breathe.”

She said that her father’s experience and her mother’s fear during pregnancy led them both to be pro-choice. Because despite the fact that it’s true that life begins at conception (and therefore abortion takes a life) we’ve made it deceptive and complicated by our own experiences and fears.

On the last night of her life, Yorston’s mother sat knitting baby blankets for babies in the neonatal intensive care unit. She was having a difficult time and Yorston offered to pray for her. The two prayed together and her mother went to bed with a sense of peace, something that might never have happened if Yorston and her mother hadn’t always loved each other despite their differences.

“Please love people with whom you disagree and speak the truth,” said Yorston.

That is how we will save abortion workers and the babies they are killing.