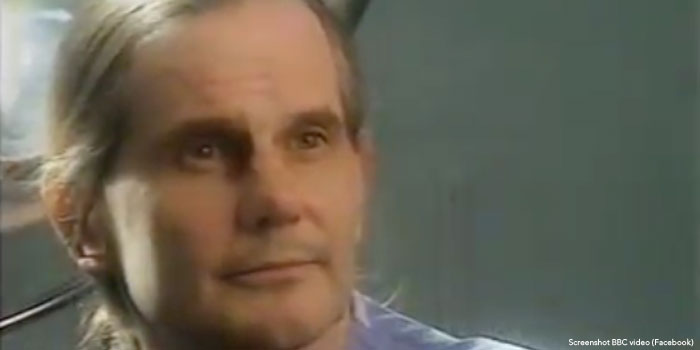 Abortionist John Parsons was interviewed for a BBC documentary about late-term abortion in a video excerpt that was recently posted on Facebook. The abortionist answers questions about his work, but is left speechless by one question from the interviewer.

First, Parsons explains how he dilates a woman’s cervix before the abortion procedure. After dilating the woman’s cervix, he will “extract the fetus.” The interviewer asks him how he does this:

Interviewer: So, when you open the cervix, how do you remove the fetus?

Parsons: I use forceps.

Parsons is describing a D&E, or dilation and evacuation, procedure. This type of late-term abortion is done in the second trimester, when the baby is fully formed, and sometimes at the point of viability. The legs and arms are torn from the baby’s body one by one, then the torso is taken out in pieces. The last stage is the crushing of the baby’s head, which is otherwise too large to fit through the cervical opening. You can listen to former abortionist Dr. Anthony Levatino, who committed these abortions in the past, explain the D&E procedure below.

The interviewer asks Parsons about how doing this type of abortion makes him feel. He says:

Well, it’s an unpleasant task because you see pieces of the fetal anatomy which are easy to recognize and therefore bring home to you what you’re doing.

While Parsons does not exactly spell out “what he’s doing,” it seems clear that the abortionist knows he is not just extracting tissue or cells, despite what many pro-choice activists claim. He sees the body parts of the baby — arms, legs, feet, etc. Some abortion workers called the baby a “product of conception.” But it is clear this abortionist knows more than a mere “product” is being destroyed in the late-term abortion.

Parsons then goes on to say:

As the gestation advances the fetus becomes bigger, and clearly is becoming more like a baby, and less easy to remove from the womb not just because of the size but because they are more solid. So more force is needed to do it.

Parsons is not the only abortionist to comment on how much force it takes to dismember a preborn baby. Arizona abortionist DeShawn Taylor, who works at Planned Parenthood, said in a secretly recorded video that she has to “hit the gym” to develop enough strength in her arms to dismember preborn babies during a late-term abortion. Her exact words were, “I remember when I was a [Family Planning] Fellow and I was training, I was like, Oh, I have to hit the gym for this.”

Parsons continues the interview by admitting he finds the act of abortion “unpleasant,” and that he understands why people say it is wrong. He even admitted that he sometimes realizes that he is killing defenseless preborn children.

READ: Bias: Centers for Disease Control ‘relies on’ abortionists for its abortion research

The interviewer then asks the question that leaves the abortionist unable to speak for several moments:

Is that the case at all gestations? Is there a point at which you think the rights, whatever they are, of the unborn child, take precedence over those of the woman?

There is a very long pause. Clearly shaken, the abortionist eventually says:

I certainly think that up to their legal limit that we’re allowed to perform terminations, the woman’s rights are paramount. But as you get nearer those upper limits, it certainly becomes more difficult, I feel, to perform the procedures, because you do realize that the fetus could, perhaps, be viable.

If the abortionist’s only concern is the woman’s well-being, what logical basis is there not to do abortions up until birth? Yet he clearly is uncomfortable with the idea of abortion through all nine months of pregnancy. Of course, we know that abortion is not really beneficial to women. It has severe psychological and physical effects. And it is never necessary to save the life of the mother.

The interviewer has forced the abortionist to consider the implications of what he does, which seems to be something he does not want to do. Parsons is clearly uncomfortable with the idea of committing abortions all the way up until birth. The problem facing the abortionist, as well as all abortion advocates, is that he has no answer to an essential question: At what point in pregnancy does a disposable “fetus” transform into a valuable baby with inalienable rights?

Few people are comfortable with very late-term abortions. Most people don’t think an abortion should be done the day before a woman is due to deliver. But where can a pro-choice person justify drawing the line between unacceptable and acceptable abortions? Fetal development is a continuum. It is almost impossible for an abortion supporter to explain why it is permissible to abort a baby one day, but not the next. There is no clear dividing line at any point in fetal development after which a human being exists who did not exist the day before. The only logical beginning is the moment of fertilization, when the child comes into existence. Any other line drawn is arbitrary.