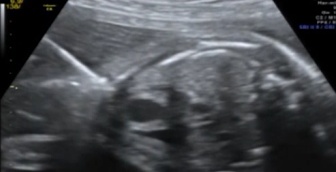 Earlier this month, the L.A. Times reported on a rare cardiac surgery which was performed on a 25-week-old fetus in utero. The procedure — a first in southern California — was necessitated by poor blood flow through the baby’s left ventricle. Because the baby’s heart was not pumping blood properly, it was likely that he or she would have been born with hypoplastic left heart syndrome, which is a life-threatening condition.

This video shows a clip of the ultrasound used during the surgery, during which doctors inserted a tiny tube and inflated a balloon into the baby’s heart to open up the poorly-functioning valve.  To prepare for the highly specialized surgery, doctors practiced on a grape (representing the baby’s heart, which is about the size of a walnut at 25 weeks gestation) inside of Jello, which represented the baby’s body surrounding the heart.

Although the surgery was performed just late last month (making long-term effects hard to predict at this time), doctors reported that the baby and mother are doing well and that it was evident immediately after the surgery that blood flow had increased and that the surgery was likely to have prevented life-threatening problem’s for the future. One of the physicians told the LA Times:

It’s only been a week or two, but even initially after the procedure, we could see increased blood flow across the valve, and the heart was squeezing a bit better than before.

In a scholarly article posted by the American Heart Association (AHA), the fetal aortic valvuloplasty procedure (which was perfomed on the baby in this story) is listed as the most common type of closed fetal cardiac intervention.  Interestingly, the AHA points out that the performance fetal cardiac intervention in utero is helpful to the baby because it occurs during a period of intrauterine gestation that is especially helpful to the baby’s recovery process:

Prenatal intervention may also allow the fetus to recover in the supportive in utero environment, during a developmental period when there is enhanced wound healing and the capacity for myocyte proliferation.