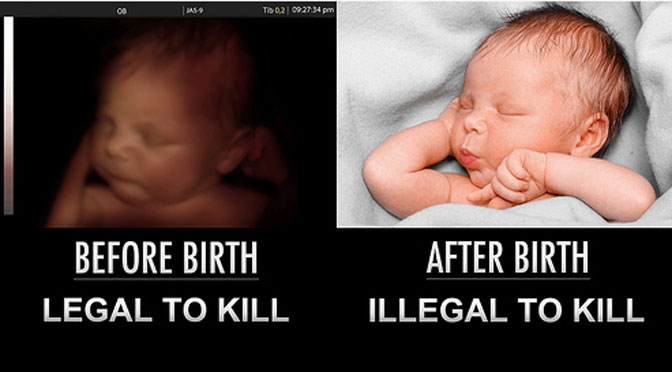 A number of particularly sickening abortion-related stories have been in the news lately, from an abortionist carrying babies’ corpses in his car to an abortion facility worker getting pressured by her superiors for respecting a patient’s reluctance to abort, from a home abortion leaving a born baby boy mutilated for life to Planned Parenthood dumping its victims’ dead bodies in landfills. And then there’s been the defining controversy of the year, Planned Parenthood’s criminal organ-harvesting side business.

All of these stories are tremendously valuable in illustrating the true character of the abortion industry. And during a time where the law’s hands are tied from going after abortion directly, it’s worthwhile to seek whatever justice we can for its lesser crimes not under the Supreme Court’s protection.

But in our discussions of these lesser scandals, pro-lifers must take great care to keep them in context of the bigger picture, to cite them not as wrongs purely for their own sake but as outgrowths of a far greater wrong.

If every abortionist really was 100% indifferent to the final decision a pregnant woman makes, it wouldn’t make their complicity in abortion legitimate. If Planned Parenthood followed every law to the letter and never made a penny from a single organ, the deaths of the babies from which those organs come would still not be respectable. If every abortionist gave each of their victims a reverent burial, the fact remains that they still victimized them.

Fixating too much on the shock value of peripheral abortion scandals runs the risk of losing sight of that fact, appealing to audiences’ sense of good taste rather than the deeper moral principles in play. Particularly with pervasive muddy thinking about abortion bogging the issue down, it can be easy to rationalize a sort of in-between stance like, I think it’s only potential life but the remains of that potential still deserve some respect. And some reservations, such as wanting the patient’s choice truly unencumbered by outside forces or not wanting those performing the procedure to compromise the patient’s health, are even logically consistent with the pro-choice position.

Think about it: if preborn babies were not real live human children, these controversies wouldn’t matter nearly as much. Mishandling fetal remains would be no worse than a hospital being reckless with how it disposes of medical waste from any number of benign surgeries. Disregarding patients’ wishes and welfare would be more serious, but still relatively routine cases of medical malpractice that we already have plenty of laws for. None of it would warrant significant national attention.

So it’s vital we strive to contextualize each discussion of these stories. Talking about Planned Parenthood dumping dead babies in landfills is important for the parallels it draws to the mass graves of human rights atrocities from Nazi Germany to Saddam Hussein’s Iraq. Detailing the harm Anna Yocca’s self-abortion did to her son is relevant because it’s a concrete demonstration of the violence in every abortion. Abortionists attempting to take choice away from their own patients is powerful because it undermines the broader credibility of an industry that says it exists to help women. And raising awareness of Planned Parenthood’s baby parts butchery is essential because it centers the conversation on preborn babies’ undeniably human characteristics.

The good news is that our labors here are already bearing fruit—the baby-parts scandal alone has been a major force in turning public opinion against Planned Parenthood. But we also know that the human mind’s capacity for rationalization and reluctance to challenge one’s preconceived notions are powerful, particularly with a topic as emotionally charged and culturally ingrained as abortion.

So as we go forward, let us strive to always connect every outrage that comes along to the ultimate outrage that makes them all possible.