In 2016, Kansas moved to permanently defund Planned Parenthood, and redirect taxpayer funding to legitimate health care providers. However, the abortion chain immediately sued, kicking off a battle that has finally reached a disappointing end.

Since moving to defund Planned Parenthood, Kansas has faced multiple obstacles, yet two administrations continued fighting nonetheless. Friday, the Kansas Department of Health and Environment, which oversees the state’s Medicaid program, filed a stipulation dropping the termination of taxpayer funding to Planned Parenthood.  It was only once Kansas Gov. Laura Kelly, a pro-abortion Democrat, was elected that the fight suddenly became not worth the cost, and not in line with Kansas priorities.

“To continue with this costly litigation would be unwise and out of step with the priorities of Kansas,” Ashley All, a spokeswoman for Kelly, said to KMUW. “Gov. Kelly is focused on expanding healthcare options to women, not limiting them.”

Despite what abortion activists frequently claim, the majority of Americans do not support taxpayer funding of abortion facilities. And while Planned Parenthood and its defenders likewise claim that low-income women rely on them, for health care, this is an equally false claim. Planned Parenthood provides little-to-no legitimate health care services. They perform less than 1% of the nation’s breast exams, less than 3% of the nation’s Pap tests, and less than 2% of all cancer screenings in the nation. They are also vastly outnumbered by legitimate health care providers. Planned Parenthood facilities, for example, are dwarfed by Federally Qualified Health Clinics (FQHCs). 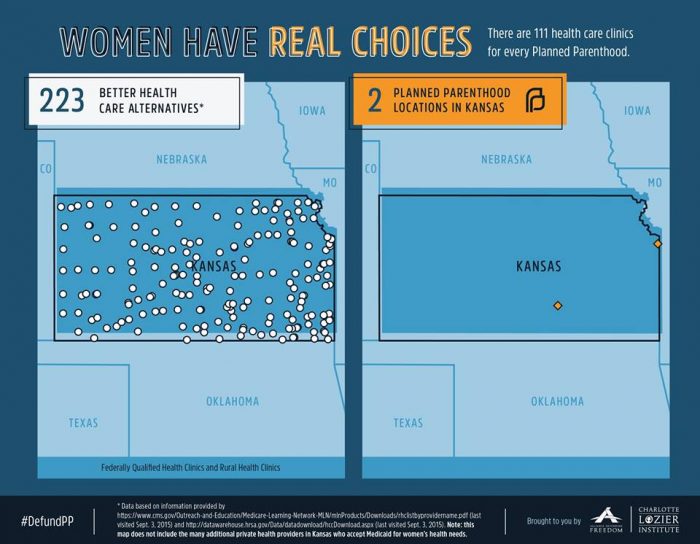 In addition to the fact that Americans don’t support taxpayer-funded abortion and don’t need abortion chains to receive health care, Planned Parenthood has also been caught defrauding Medicaid multiple times — yet that is another fact that does not matter to pro-abortion ideologues.

Planned Parenthood is not inherently deserving of taxpayer funding just by virtue of existing, and women deserve better choices than an abortion chain which treats them horribly, protects abusers, and increasingly slashes the little medical care they do provide. Protecting Planned Parenthood and their taxpayer funding isn’t about looking out for women; it’s about ensuring that abortion is easily accessible, and nothing more.