Taking steps to tell the truth – even if some don’t want to hear it.

Justice For All is a pro-life training organization whose mission is to train pro-life activists to use persuasive and articulate arguments to educate others on the reality of abortion and challenge people’s viewpoints on the issue. The organization travels from campus to campus to share its message. David Lee, founder of Choices Medical Clinic and the executive director of Justice For All, launched the organization with a mission rooted in the belief that personal conversation is more effective in changing hearts and minds on abortion than impersonal public debates. 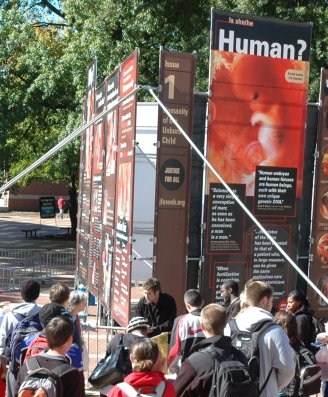 “Our goal is to train pro-life people to be good ambassadors, as well as be persuasive in their arguments,” says Jacob Burow, the operations coordinator for Justice For All. “We teach that a good ambassador seeks first to listen. We teach people to ask good questions and listen to gain an understanding of what the other person believes and why. Then we teach how to ask challenging and thought-provoking questions in a loving manner, in a way that will best help the other person really think through her position.” Justice For All encourages discussion using polls and asking questions of those who pass by the displays.

“Our smaller, fetal development kiosk asks, ‘Where Do You Draw the Line?’ for when we gain basic human rights,” Burow said. It is a great way to start the discussion on the central issue, the question of whether or not unborn living human beings have the right to live.”

Asking good questions, listening to others, and finding common ground between the pro-life and pro-choice viewpoints are critical aspects of Justice For All’s mission. “Using these skills promotes respect among everyone, and many pro-choice people tell us that although they disagree with our message, and even our display, they really appreciate how we take time to hear their positions and their stories,” Burow explained. “We even go so far as to have an open microphone on which we allow anyone to share his views with the crowd.”

Most people can agree that opening dialogue and simple polls are good tools to get people discussing abortion. However, perhaps the biggest controversy lies in one of the methods Justice For All uses: a large, 18-foot-tall display with graphic images depicting the aftermath of an abortion procedure.

“With our large [abortion] exhibit, people are generally astounded that we would go to such great effort to get our message out,” Burow said. Many passers-by express gratitude that the Justice For All team does not engage in yelling or shouting: the graphic images speak loudly enough. But naturally, there are pro-choice and pro-life activists alike who become very upset at the use of graphic images in such public places such as college campuses.

“I often relate the story of Emmitt Till, a black boy whose murder in Mississippi in 1955 was a major catalyst for the Civil Rights movement.  [Till’s] mother requested an open casket funeral, even knowing that his body was barely recognizable.  Reporters were shocked she would do this, and they asked her why she would choose an open-casket funeral.  She said: ‘I want all the world to see what they did to my boy.’

“Jet Magazine published the story of Emmitt’s death and funeral and included photos of his body as he lay in state. In a very public way, America saw the horror of what racism meant practically. They saw the face of racism in what had been done to Emmitt. The Justice For All exhibit, in a similar fashion, shows the face of choice, the horror of what abortion does to unborn children.” Burow continued, “If our exhibit being on campus today saves the life of one child, would it be worth upsetting hundreds of people?” Although the display has certainly upset many, it has also saved lives!

“We should be sensitive to the fact that they can cause an emotional train wreck for men and women who have been involved in abortion and are just beginning to learn what it is that they have done,” Burow said. He explains that he can’t know what each person experiences after an abortion, but there are post-abortive women who work with Justice For All. Lori Navrodtzke is such a woman.

“Initially, Lori was not excited about our exhibit due to the personal pain of having had an abortion herself,” said Burow. “As she slowly got more involved, she found that learning to minister to others brought more healing for herself. Lori is now actively involved in our certification program, and has found that her voice on campus has weight and authority that others’ do not.” (Lori’s reflections can be read here.)

Just this spring, a young woman named Amanda passed by the Justice For All display. Her roommate was scheduled to have an abortion, and Amanda was desperate to find the words to help her roommate choose life instead. Amanda stopped by the JFA display and spoke with Catherine, a volunteer, who helped Amanda learn how to share the informational brochure with her roommate.

A couple of days later, Catherine received a phone call at the office – Amanda’s roommate was calling to thank Justice For All for talking to Amanda, who had shared the brochure with her. She decided not to go through with the abortion, and Catherine was excited to attend a baby shower for this young lady recently.

Training through Justice For All teaches pro-life advocates how to dialogue effectively. The fall schedule is available on their website. Internship opportunities are also available. You can also sign up to receive JFA prayer updates on their website or donate to JFA or to one of their missionaries.