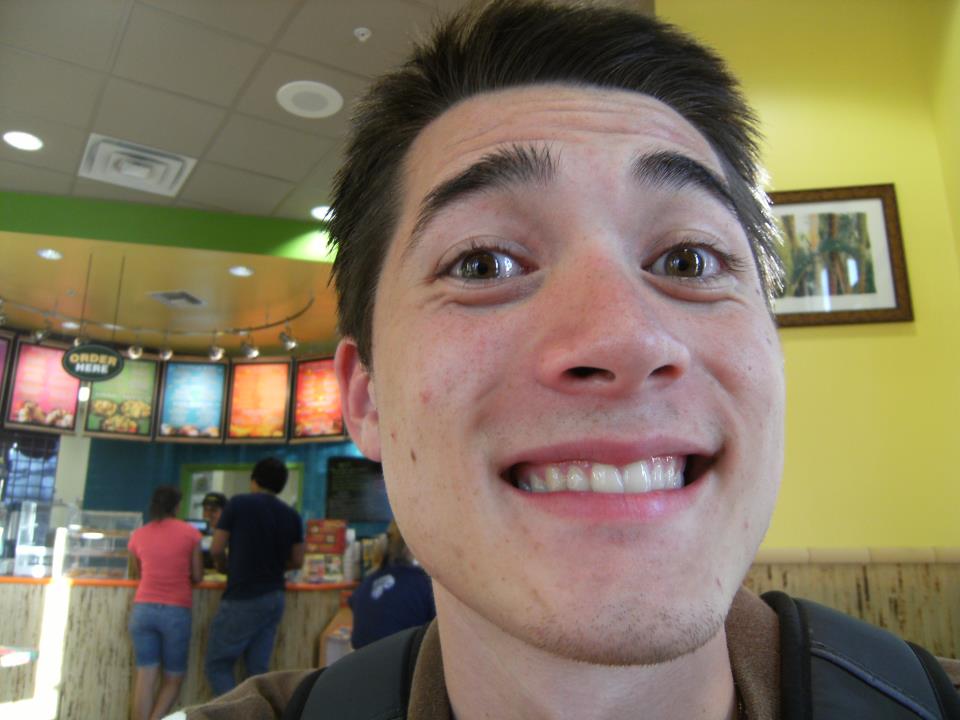 Jon Scharfenberger was a vivacious young man. He loved his faith, he loved everyone he met, and he defended life in a way that I haven’t seen before or since. Jon passed away in a car accident about a year and a half ago. He was traveling through Georgia, doing pro-life work with Students for Life of America when he died. Many will remember that his coworker Kortney Blythe Gordon and her unborn daughter Sophy also passed away as a result of the tragic accident. It rocked a lot of lives all over the world. I want to tell you why it rocked mine. 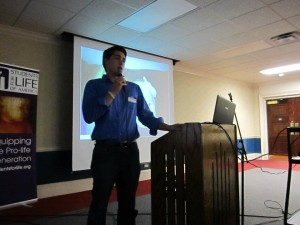 This is the last photo of Jon taken on earth, in 2011. Thanks to Megan Hamrick for sharing it.

Jonathan Scharfenberger, who went by Jon Scharf of his own volition and Jon “Shark” by the volition of others, was that college friend everybody loves. He woke up every morning with a passion to live life to the full. As a result, he was active in his philosophy studies, he had a rich prayer life (richer than most of us knew), and a full social life; he was active in sports, and he loved his family. Jon also dedicated a lot of his time to pro-life work.

Jon had a special finesse for sweet-talking pro-life advocates who had the monetary means to help support our pro-life efforts at Ave Maria University. As a result, Jon dragged me along on most of the fundraising dinners and formal events he attended off-campus. Jon and I were a good team, because he took care of public relations and major event organization for our group, while I was content to do more of the student-oriented activities, like praying at the abortion mill.

Jon could sell anything – he would try to convince me that I would have the night of my life out at some pro-life banquet when in reality he usually needed me to come because he didn’t have his own car and needed me to drive him. Regardless of his motives, though, these nights with Jon somehow always turned out to be remarkably fun. 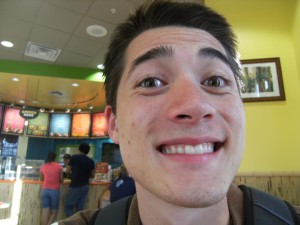 Jon commandeered my camera in 2009 when he took this self-portrait while we were out for smoothies.

Jon was responsible for the success of several of Ave Maria’s pro-life banquets, in fact. He was a masterful planner and knew how to delegate really well. He knew whom to call when he needed something, always seeming to have another phone number in his arsenal of important pro-life people. And these people loved Jon. It was always fascinating to see how others would jump at any opportunity to help Jon Scharf.

Jon graduated in the spring of 2011, but his pro-life work didn’t stop there. He went on to work for Students for Life of America after graduating, where he took charge of the Pregnant On Campus Initiative. You might remember his hilarious, bubbly personality from the video below, which I shared in a recent article about the Pro-Life Aggies. The guy pushing the baby around is Jon Scharfenberger, and he died shortly after this video was filmed.

I know. I know I’m not that good-looking, or anything.

I’m remembering Jon Scharfenberger this Good Friday because his legacy is especially alive on holy days like today. As a faithful Catholic, Jon prayed every day. He was often seen toting his breviary (a book of Scripture and prayer that is prayed by Catholics around the world every day) around campus and everywhere else he went. Jon woke up early and started his days with prayer – I think this way that he ordered his priorities is how he crammed in the unbelievable amount of other activities he usually accomplished before going to bed at night.

Jon died while doing pro-life work, committed to the calling he had been given and living life to the full. He was working to spare little ones from the tragedy of abortion, and to help pregnant and parenting students on college campuses discover the support and help they would need to make it through and achieve their education goals. Like Christ, whose death we remember today, Jon had only a few years on earth to accomplish everything he needed to do, but, like Christ, he did an incredible amount of good in a short period of time.

We will always love and remember you, Jon. I remember you every day when I repeat your name, about three thousand times, to my 8-month-old who gets into everything. Don’t take it personally, Jon, but usually I’m yelling your name, frantically trying to avert some disaster or keep little hands out of the toilet bowl: Jon! Get out of there! Jon! Don’t play with that! Whisper in God’s ear for us, and ask him to bless the work of yours that we are continuing here on earth.